Pluto goes under the spectroscope

In January 2006, the NASA New Horizons spacecraft launched from Cape Canaveral in Florida. Its mission: to explore the outer reaches of our solar system. This summer, almost 10 years later, it carried out the first ever flyby of the dwarf planet Pluto and its moons.

The unmanned spacecraft is now hurtling deeper into space, while sending the data its seven onboard analytical instruments collected during the couple of months it spent near Pluto. This data transfer will take around 16 months, but scientists are busily interpreting the information that has already travelled the three billion miles back to Earth.

The most breathtaking outcome of this mission so far is undisputedly the photographs of Pluto taken on the 14 July as the spacecraft flew within 12,500 km of the dwarf planet’s surface. Previous images showed a pixelated, grey blob but these new, coloured, crystal-clear photos of the dwarf planet are simply stunning.

But this mission, which cost more than £450 million, was after much more than pretty pictures to fill our museums and textbooks for decades to come. Scientists hope it will answer many questions such as what Pluto’s surface and atmosphere are comprised of. Some even hope it will force a rethink on Pluto’s summer 2006 downgrade from planet to dwarf planet. 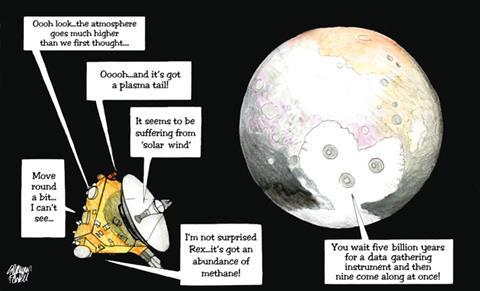 Meanwhile, the onboard ultraviolet imaging spectrometer, named Alice, has observed that Pluto’s nitrogen-rich atmosphere reaches as far as 1600 km above its surface. This is more than five times further than had previously been observed.

Also probing Pluto’s atmosphere was a telescopic camera called Lorri. Photos taken from behind Pluto suggest that hazes in the dwarf planet’s atmosphere – triggered by the breakdown of methane by UV light leading to a build-up of ethylene and acetylene – also reach far higher than previously  thought.

A solar wind and plasma spectrometer, called Swap, has also observed nitrogen ions tens of thousands of miles beyond Pluto that have been stripped from the planet’s surface by the solar wind. Scientists are particularly keen to calculate the rate of this atmospheric loss, but must wait for more data from Alice and the onboard radiometer Rex to do this accurately.

These results are just a snippet of the secrets this icy world is expected to give up in the coming months, and already many space scientists are claiming their expectations for this mission have been surpassed. Note that although New Horizons is described as unmanned, it is carrying some of Clyde Tombaugh’s ashes, the man who discovered Pluto in 1930. When requesting a space burial shortly before his death in 1997, he could barely have dreamt of making it to Pluto and beyond.