Simon Cotton takes a look at those compounds that find themselves in the news or relate to our everyday lives. In this issue:toxic amino acids

I didn't know they existed! 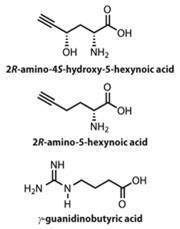 A group of researchers mainly based at the Kunming Institute of Botany in China have studied a species of Trogia venenata  mushroom, which has been implicated in the deaths of some hundreds of people who had eaten it. They isolated three toxic amino acids from it, 2R -amino-4S -hydroxy-5-hexynoic acid, 2R -amino-5-hexynoic acid and γ-guanidinobutyric acid.

But I thought all amino acids were natural and safe?

These poisonous ones are natural; just because something exists in nature doesn't mean it is safe.

There are over 500 amino acids in nature, but the compounds that we normally refer to as 'amino acids' are the 20 used in nature to make proteins, and these are not toxic. Strictly speaking these should be referred to as alpha (α) amino acids, RCH(NH2)COOH; they contain an amine group bound to the carbon next to the carboxylic acid group, the alpha carbon. All except glycine contain a chiral carbon, so they have two stereoisomers (enantiomers).

Are both stereoisomers used to make proteins?

No, only the L-isomers are found in proteins. D-amino acids are very rare in nature. Some bacteria use D-amino acids in making the peptidoglycan layer in cell walls as they are not recognised and attacked by the enzymes that hydrolyse the peptide links in proteins formed by L-amino acids.

Why do the L-amino acids predominate in nature?

If you can answer that question, there may be a Nobel prize waiting for you.

One suggestion is that this originated in space. In 1969, a meteorite fell to ground in the small Australian village of Murchison. It contained nearly 100 different amino acids, only 15 of which are found in proteins. Remarkably, there was a 5-10% excess of the L-form of some of the amino acids over the D-form. Such an excess has also been found in meteoric fragments recently recovered from Antarctica.

It has been hypothesised that circularly polarised radiation from neutron stars could selectively destroy one chiral form of the amino acid, resulting in an enantiomeric excess. Other scientists have found that crystallisation processes can increase the imbalance.