When ‘Victoria line closed due to flooding at Victoria Station’ bellowed out throughout the London underground network after lunch on Thursday 23 January many travellers barely raised an eyebrow. Hardly surprising due to the record rainfall England has been suffering from of late. For once our weather wasn’t to blame, but rather builders and some wet concrete practiced in the art of escapology. 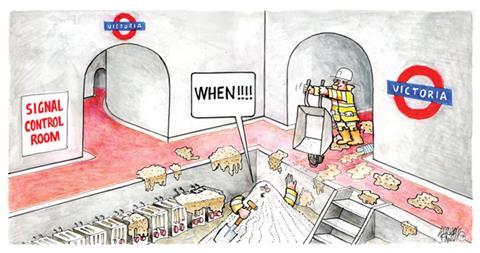 Wet quick-drying concrete – being used by contractors upgrading Victoria Station – appears to have escaped through a void in the escalator machine room into the Victoria line signal control room. The room, and its equipment, rapidly became submerged in 30 cm of wet concrete. The equipment was immediately shut down, along with the tube line it controls. Damage limitation came from the engineers’ quick-thinking and chemical knowledge. The solution was surprisingly simple: as many bags of sugar as they could lay their hands on.

Sugar is already extensively used in the handling of concrete – normally as one component of a chemical retarder added when it is being mixed. The sugar slows down the setting of the concrete, and is used in hot conditions or when large amounts of concrete must be poured out before setting occurs.

Very small amounts of sugar delays the hardening of concrete without influencing its strength or other properties once finally set. For example 0.05% by sugar weight of concrete will retard setting by a few hours, while just 1% will almost completely inhibit hardening.

So, raiding the aisles of all the local supermarkets (as the builders were seen doing) provided enough of the sweet stuff to allow the mess to be cleaned up before it set. The room was quickly cleaned, damaged equipment replaced, and the Victoria line was up and running in time for the following morning’s rush hour.

But why did it work? Well the short answer to that is we are not quite sure. Concrete is a mixture of cement, aggregate (gravel and sand) and water. When the cement – limestone and small quantities of clay and gypsum – comes into contact with water, the calcium silicates and other compounds within it become hydrated and crystallise forming a thick paste that holds the aggregate material together.

The role sugar plays in slowing down the hydration process is not well studied however. One suggestion is that the sugar molecules bind with the aluminium and calcium in the cement, meaning less of these elements are available to take part in the hydration process. Another is that the sugar molecules coat the cement particles preventing them from being hydrated. It just shows that we still don’t know everything about something as commonplace as cement and research in the area will undoubtedly continue.

Regardless of how it worked, it did. And when preparing to make a cup of builder’s tea once the drama was over, one can’t help but wonder if the contractors broke into a smile when confronted with an empty sugar bowl.