Grime is found on every surface in urban environments. Buildings, statues, street signs and pavements are all covered with a grimy layer of chemicals from cars, factories and other polluting sources.

We’ve always thought that once this layer has been deposited on a surface the complex mixture of organic and inorganic chemical pollutants contained within it are locked in, remaining in their resting place until a window cleaner or street sweeper scrapes them off.

New observations suggest this isn’t correct. James Donaldson from the University of Toronto, Canada, and his collaborators in Leipzig, Germany, now believe sunlight can cause nitrogen compounds to be re-released from the grime and recycled back into the atmosphere. Here, these compounds once again contribute to ozone and smog. 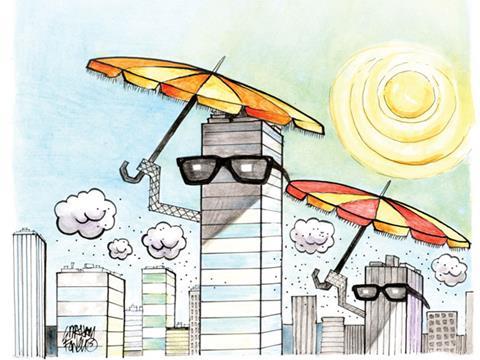 The researchers have carried out a series of lab and field – or in this case, city street – experiments that support their claim. First, grime collected in Toronto was examined using infrared spectrometry to determine its composition. It was then exposed to artificial sunlight in the lab, and its composition reassessed. Nitrate components in the sample were observed to rapidly leave the grime when it was exposed to light.

The next series of experiments took place over a six week period on a street in Leipzig. The team collected grime on glass beads (made of the same type of glass as windows) stored on a two-tiered structure that resembled takeaway pizza boxes stacked on top of each other. The beads in the top tier were exposed to natural sunlight, while those in the lower tier were shaded from the sun’s rays.

The team then took both sets of beads back to the lab and analysed the chemicals deposited on them. The beads kept in the shade contained 10% more nitrates than those exposed to the sun, supporting the earlier lab-based findings that nitrogen compounds can escape grime with the help of light. An extended year-long version of this study is still running in Toronto.

Back in the lab, the Toronto arm of the team have analysed the gas phase products released when artificial sunlight is shone on real grime, finding that nitrogen dioxide and nitrous acid are both released. Both are important air pollutants.

These findings may eventually lead to improved models for estimating the quality of urban air, but there remain a number of questions – such as the effect of humidity or varying amounts of sunlight – to be answered first.

Efforts to reveal the secrets of urban air pollution, and therefore improve our models, are vital for enabling policymakers to make good decisions about keeping air pollution at safe levels. The end goal is, of course, to ensure we can all breathe easily when spending time in our cities.