A daytime red sky is very unusual, but smoke pollution in this part of the world is not. The smoke comes from fires illegally set to clear forest areas for plantations. In Indonesia, this so-called slash-and-burn farming is notorious for being poorly controlled. 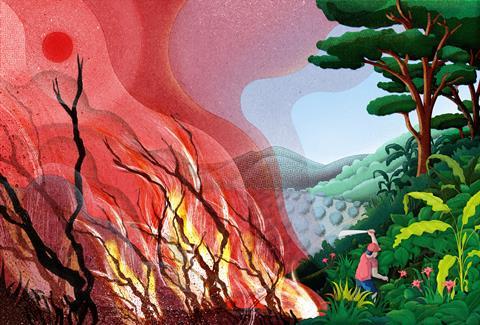 On 23 September, the country’s National Agency for Disaster Management (BNPB) said that 328,000 hectares of land had been burned so far in 2019. That’s roughly the size of Wiltshire, my home county. And it’s not just the trees that burn in these fires, but also the peat they are growing on.

Peat fires are particularly problematic because they smoulder, which is an incomplete – and very polluting – form of combustion. The BNPB reported PM10 concentration peaks of over 400 µgm-3 in the city of Jambi on Sumatra this year. PM10 is particulate matter measuring less than 10 µm, for which the World Health Organization (WHO) states a safe annual mean concentration is 2 0μgm-3.

The last time fires in this region were this bad – 2015 – the resulting air pollution was estimated to have caused over 100,000 premature deaths. These weren’t just in Indonesia. Smoke doesn’t respect national borders. Neighbouring Malaysia and Singapore also suffer with reduced air quality during large Indonesian forest fires. This was the cause of the haze that threatened to disrupt this year’s Singapore Grand Prix on 22 September.

Spikes in acute respiratory illnesses in the region have been reported. And Unicef, the United Nations Children’s Fund, sounded an alarm a couple of days after the red sky event, warning that air pollution from this year’s fires was putting nearly 10 million children at risk. Time will tell how many deaths will be attributed to this year’s fire smoke.

But what about the red sky, why did that happen? It is because of the way smoke particles scatter sunlight. The dominant form of light scattering in the atmosphere is normally Rayleigh scattering. Light rays hit small objects, such as molecules of nitrogen and oxygen, and bounce off in all directions. The short wavelengths of blue light are scattered more efficiently by small objects than those of other colours, and this is why we see the sky as blue in daytime.

Smoke particles are much larger than gas molecules, and instead better scatter the long wavelengths of red light. This is known as Mie scattering. When particle concentrations get really high, Mie scattering can dominate over Rayleigh scattering meaning we see the daytime sky as red rather than blue.

Light scattering from particles fired from volcanic eruptions can also change the colour of the sky; most often observed as multicoloured sunsets. Particles from the vast eruption of the Indonesian volcano Krakatoa in 1883, for example, caused vibrant sunsets around the globe and are said to have inspired Norwegian artist Edvard Munch’s The Scream.

With thanks to Demetrios Pagonis at the University of Colorado, Boulder, for explaining light scattering to me.