Boiled eggs: how many can you eat in one hour? 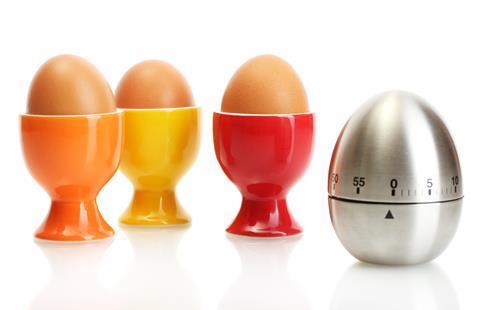 To eat 50 boiled eggs in one hour - no throwing up! That was the crazy stunt bored prisoner Luke (Paul Newman) attempted in the film Cool hand Luke. Is this really possible?

The first problem is a matter of stomach volume. Fifty boiled eggs occupy about three litres. The average empty stomach volume is ca 1-1.5 litres, so it is unlikely that Luke's stomach could hold 50 eggs. However some large people may have larger than average stomachs so this might not be a problem. In the film we see Luke exercising, running around trying to get fit for the challenge but to be honest it looks more like he's tightening up his stomach rather than stretching it.

If you have ever tried eating just a couple of boiled eggs you quickly notice that your mouth dries up. We produce saliva to break down the food prior to it entering the stomach where digestion starts. We can only produce a limited amount of saliva (ca 100 ml) before we need a rest (if you don't believe me try eating 10 dry crackers one after the other).

Once the food has been partly broken down in the mouth and mixed with the saliva it moves down into the stomach. The stomach is rather like a grinder - it uses muscles and the enzyme pepsin to break down foods (acid is also present, which provides the correct chemical environment for the enzyme to work and also helps to kill any bugs).

In the egg eating challenge you might reason that the stomach processes would move some of the egg mass on to the intestine as soon as possible to make way for more eggs. Unfortunately, after only one hour only a small fraction of the egg material would have moved along into the intestine. It will however eventually do so and then the bacteria present in the intestine will feed on the proteins in the food, producing among other things gases like hydrogen sulfide, which smells of rotten eggs.

It's not difficult to imagine the problems Luke's fellow prisoners would have had sharing a cell but gases would not have been his main problem because I don't think most people could keep down 10 eggs let alone 50 eaten one after the other in just one hour.

To encourage, stimulate and explore the Art of experimenting