Hang time: could you use a hose pipe to break a fall of 10 metres? 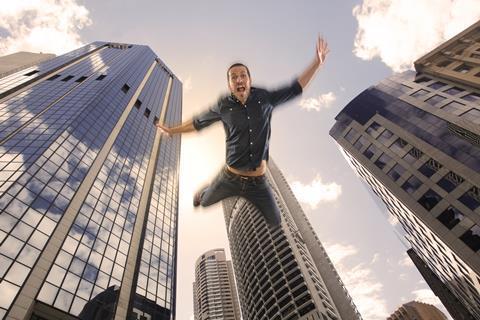 In the 1988 film Die Hard we see Bruce Willis escape his assailants by jumping off the top of a tower with only a fire hose wrapped around his waist to break his fall. To help us discover what might happen to him we need to consider the material properties of the hose pipe, but first we need to do some calculations using a few basic physics equations, to work out the forces on Willis.

Looking at the clip it looks like Willis free falls about two or three floors, ca 10 m, before the hose brings him to a stop. From the equation:

where s is the distance he falls and g is the acceleration due to gravity (ie ca 10 m s-2), we can estimate how long (t) it will take him to fall this distance by first rearranging the equation (i) so that:

Using this value for t, we can work out how fast (v) he will be falling just before the hose stops him from the equation:

This is about the same amount of energy liberated when a very large firework goes off.

As Willis is brought to a standstill all this energy has to be dissipated in the hose or in him. If this happens only at the very end of his fall he will experience a much greater force than if he is brought to a stop over a longer braking distance.

To calculate the forces on Willis we rearrange the equation:

where d is the braking distance.

Of hose pipes and stretching

Let us start by being kind to Willis. Let us say that instead of a fire hose, he used a 5 m bungee rope, and that this stretches another 5 m to bring him to a gentle stop 10 m below. Bungee ropes are made of many latex strands bundled together. Because of the elasticity of the strands they can absorb a great deal of the energy of a fall, making bungee jumps relatively safe. Using equation (iv) we get a force on Willis of 7900 J/5 m = 1580 N (Newton), equivalent to a weight of 158 kg, ie about twice his weight – similar to the force on your feet when you give someone a piggy back ride, which is acceptable.

In contrast, fire hose is made of woven nylon, a masterpiece of chemical engineering. Hose pipe can withstand pressures of up to 80 atmospheres (ca 8.1 × 106 Pa), pressures which, if the hose splits, can break brick walls. I tried putting a bin full of water onto a 1 m piece of fire hose hanging from a tree. It barely stretched 1 mm before the branch broke under the weight. So in the Die Hard fall it's unlikely to stretch very much.

So what would happen to our action hero? Talking through this one day with the actor and presenter Robert Llewellyn he quite rightly reflected, 'I think there would be a Bruce and somewhere else, a Willis'.