Snail Pie on the menu

Are we missing out on a nutritous treat? 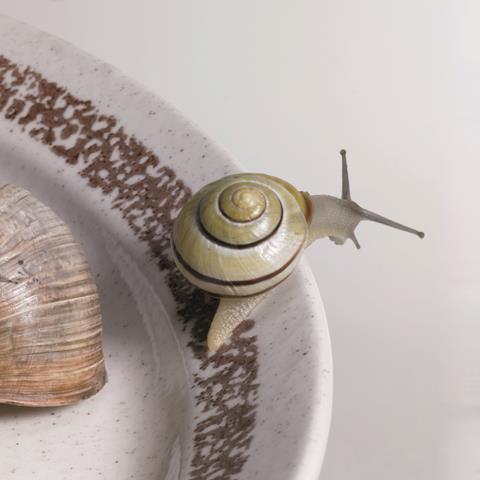 One snail is off the main course

The thought of ‘snail pie’ appearing on the menu in UK schools would provoke nothing short of horror for most pupils. But, while snails are not a common food on the British plate, the same is not true in many other parts of the world. Europeans – the French, Spanish, Portuguese, Greeks and Cypriots – as well as Americans, Australians and North Africans have been enjoying these molluscs in a variety of recipes for centuries. And it seems that the British people might be missing out.

According to nutritional studies published by the USDA National Nutrient Standard Reference, snails are high in protein and low in fat, and a rich source of minerals such as iron, magnesium, phosphorus, potassium, copper and zinc. Indeed, according to a nutritionist in Nigeria, snails might be the answer to serious malnutrition and iron deficiency in children and young mothers in developing countries.

Reporting in the International Journal of Food Safety, Nutrition and Public Health, Dr Ukpong Udofia, of the University of Uyo in Nigeria and her team examined the moisture levels, protein content and iron composition of the flesh of the giant West African land snail and compared these data to those values in beef steak. The team’s findings suggest that snail is more nutritious than beef. The fresh snail had a higher moisture content as well as higher protein and mineral content than fresh beef. Moreover, the value of iron in snail was 16.95 per cent compared to 10.20 per cent in fresh beef. So while beef is a good source of iron, snail is better.

But does snail meat taste as good as beef, and what about its texture and appearance – how do these compare? To find out Udofia and her research team baked snail and beef pies, and asked a group of 50 young mothers and 50 school children to try them – none of the tasters knew which meat pie they were eating. The results indicate that the majority of the group preferred snail pie to the beef variety on all counts – appearance, texture and flavour.

There is no quick fix to the problem of malnutrition in developing countries, but Udofia says an alternative to high-cost meat products could help.