John Emsley, University of Cambridge, takes you on a tour of the periodic table. In this issue: a knock-out element, xenon changed chemical theory of the noble gases

There are two billion tonnes of xenon in the atmosphere but it is still one of the rarest elements on Earth. There is much less of it than the other noble gases - which explains why it is 50 times more expensive than neon. Some geochemists, however, suspect the 'missing' xenon is hiding in water clathrates or even locked up in silicate rocks.

The not so 'inert' gas

Xenon was discovered on 12 July 1898 by William Ramsay and Morris William Travers at University College London. They had already isolated neon, argon and krypton by fractional distillation of liquid air and, using the same method, eventually isolated a heavier gas, which they called xenon from the Greek word  xenos,  meaning strange. When they examined xenon in a vacuum tube it gave a beautiful blue glow and they realised that it was another 'inert' gas, so termed because it appeared to be completely unreactive. 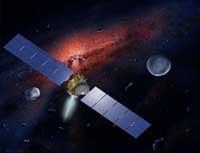 And so it continued to be regarded for the next 64 years until 23 March 1962 when British chemist Neil Bartlett, then at the University of British Columbia in Vancouver, made the first xenon compound, XePtF6. Other xenon compounds followed and today there are more than 100, including oxides, acids, salts, and metal complexes.

Compounds with xenon-hydrogen, xenon-sulfur and xenon-gold bonds have been made (HXeOXeH was reported last year), though most are stable only at low temperatures. The most exotic compound so far has four xenon atoms attached to a central gold atom and this ion, [AuXe4]2+, is stable below -40o C.

Xenon fluoride, XeF2, is even available commercially and used to etch silicon microprocessors. It is also used in the manufacture of the anticancer drug, 5-fluorouracil.

Xenon - it's a knock-out gas

Xenon is produced as a byproduct from liquid-air plants. World production is currently ca  10 million litres (10,000 m3, around 60 tonnes) per year of which 15% is used as an anaesthetic. Xenon was first successfully used this way in 1951, and though expensive it has few side effects and so is increasingly being used today in surgery.

Radioactive xenon-133, with a half-life of five days, is produced in nuclear reactors and is used in medical imaging, specifically photon emission tomography (PET) to examine the heart, lungs, and brain.

When an electric discharge is passed through xenon, a gentle blue light is emitted, which extends into the 'safe' part of the ultraviolet region, and so xenon can be used for sun beds and the biocidal lamps seen in food preparation areas.

Xenon headlights and fog lights are used on some vehicles, and will illuminate road signs better than conventional lights. Xenon is also used for the built-in flash bulbs of modern cameras because it can deliver an intense burst of light when pulsed with a very high voltage.

A super solvent and fuel

Liquid xenon has a critical temperature of 16oC at 58 atmospheres pressure (290 K at 5.84 MPa). Above this temperature it is an excellent supercritical solvent. Indeed its lack of chemical bonds make it transparent to infrared, visible, and ultraviolet light and suitable as a solvent for NMR.

Xenon is also used as fuel for ion engines. In these, a beam of atoms is ionised and then accelerated by an electromagnetic field to be expelled at 30 km s-1 (ca 100,000 kph), thus providing a powerful thrust. An ion engine is 10 times more efficient than a conventional propulsion unit, and xenon ion propulsion systems, XIPS, (pronounced 'zips') are used by Earth satellites to keep them in the correct orbit. XIPS extend the lifespan of TV satellites to 25 years because they need less fuel to adjust their position.