Africa’s gift to the world

Raymond Cooper and Jeffrey Deakin explain how a tiny plant from Madagascar, known as the rosy periwinkle, is helping in the fight against cancer

Scientists looking for potential new drugs in plants can take various routes along the path to drug discovery. All the plants in a specified region can be collected and their extracts tested – or screened – against various whole organisms, cells or purified proteins in the hope of finding new biologically active compounds, which might one day lead to new drugs. An alternative approach called ethnobotany, selects plants for screening based on their folkloric use in one or more traditional societies. Plants within the same species often contain similar compounds, and therefore another more targeted approach is to probe plants related to those already known to contain bioactive chemicals. 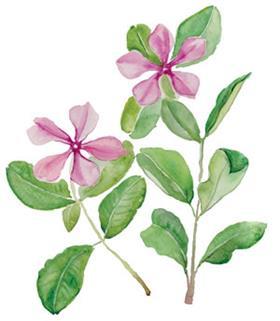 Regardless of how it is done, searching for new drugs in plants is tedious, time consuming and expensive. In a complete turnaround from 20 years ago, only a small number of pharmaceutical companies now continue with active research programmes in medicinal plant chemistry. But no matter which route in drug discovery is taken, serendipitous discoveries often play a part along the way.

A beautiful pink flower from the island of Madagascar off the coast of east Africa called the Madagascar periwinkle (Catharanthus roseus), also known as the rosy periwinkle, has long been used by traditional medicinal healers for treating diabetes. In the 1950s, this attracted the attention of western natural product chemists searching or biologically active compounds in plants and consequently the periwinkle’s anti-cancer properties were discovered. Further research led to isolation of two biologically active chemical substances produced naturally in the plant – vincristine and vinblastine – and to their identification as anti-cancer agents. These compounds have both been used as chemotherapy drugs since the early 1960s.

Today, both are included in the World Health Organization’s list of minimum medicine needs for a basic healthcare system for both adults and children. Vincristine is used against various blood and solid cancers including acute lymphoblastic leukaemia and Hodgkin lymphoma. Vinblastine is most often used in bladder cancer treatment but is also effective against other blood and solid cancers including Hodgkin lymphoma. Both are frequently used in combination with other chemotherapy drugs.

The route to discovery

It took many more years before the full benefits of this plant were realised. The first chemistry and drug trials were not conducted until the 1950s. During this period, the large US pharmaceutical company Eli Lilly was testing hundreds of plant extracts a year for biological activity in the hope of finding a lead to the development of a new drug. Gordon Svoboda (1922–1994) added the Madagascar periwinkle to the list of the company’s research subjects based on his recollection of reports of the use of periwinkle products for the treatment of diabetes in the Philippines during the second world war. In December 1957, an extract of the plant was submitted for biological testing. Gordon learned in January 1958 that the extract exhibited very high potency in anti-cancer tests.

At the same time and independently of work at Eli Lilly, two research scientists, Robert Noble (1910–1990) and Charles Beer (1915–2010) at the University of Western Ontario in Canada, discovered that extracts of the Madagascar periwinkle destroyed white blood cells. Results of their research on the discovery of novel anti-cancer activity were presented in March 1958 at a research symposium at the New York Academy of Sciences. The research paper had been submitted to the conference at the last minute by invitation of the conference organiser, who recognised the importance of their findings and found a slot for them to present. However, the symposium ran late and the Canadians presented their findings at midnight. The audience had dwindled to just a few listeners – most of whom were researchers from Eli Lilly.

At the time the Canadians’ paper was presented in the spring of 1958, neither research group knew of each other’s work on the same plant. While the two groups were looking for anti-diabetic effects both had observed that their respective plant extracts lowered white blood cell counts in laboratory animals. Both teams deduced that since leukaemia involves a proliferation of white blood cells, an agent that reduced the number of white blood cells might have potential value in leukaemia therapy.

At the meeting Charles reported he had isolated the first active compound, which he named vinblastine, from an extract of the plant. Needless to say, the Eli Lilly research team was extremely interested in Charles’ work and a formal collaboration between the Eli Lilly and the Canadian researchers was soon established. This collaboration led to the rapid identification, development and advancement of two closely related drugs from the periwinkle’s extract: vincristine and vinblastine.

One of the challenges that had to be overcome during the race to market was to secure sufficient quantities of compounds. The extraction of just one gram of vinblastine requires 900 kg of dried leaves. Eli Lilly was forced to move away from dependence on erratic supplies of widely scattered plants in the wild to large scale farm cultivation.

In 1961, vincristine was approved by the US Food and Drug Administration (FDA) as a chemotherapeutic agent for the treatment of Hodgkin lymphoma. Vinblastine gained acceptance from the FDA two years later in 1963. Approval of both drugs followed quickly thereafter in the UK and other countries worldwide.

Vincristine and vinblastine are both alkaloids, a group of naturally-occurring chemical compounds found commonly in plants that almost always contain at least one basic nitrogen atom in a cyclic ring of carbon and hydrogen atoms. Extracts of the Madagascar periwinkle have been found to contain up to 70 different alkaloids. Many alkaloids have been found to have pharmacological effects in humans, and as a consequence are widely used for medication or as recreational drugs. Examples include the local anaesthetic and stimulant, cocaine; the stimulants, caffeine and nicotine; the analgesic, morphine; and the anti-malarial drug, quinine.

Due to the presence of a basic nitrogen atom, alkaloids can be purified from crude plant extract samples by a combination of acid-base extraction and liquid-liquid partitioning between an aqueous solvent (in this case dilute acid) and an immiscible organic solvent (such as dichloromethane). Once this periwinkle was selected, research was undertaken to find organic solvents that could first dissolve the alkaloids in order to separate them from the plant material. Subsequent isolation and the use of refined chromatographic techniques led to the separation of pure samples of vincristine and vinblastine.

Vincristine and vinblastine contain many functional groups familiar to the student of organic chemistry: carbonyl groups, hydroxyl groups, carboxylic groups, aromatic rings and an indole ring. When finally all the pieces are fitted together, structurally and chemically, both molecules are complex.

Vincristine and vinblastine have similar biological and chemical properties as their chemical structures are very closely aligned. In fact, vincristine and vinblastine are so similar they differ by only one carbonyl group, present in the form of an aldehyde functional group in the former, compared with a methyl group in the same location in the latter.

Tens of thousands of cancer patients, especially those suffering from leukaemia and lymphomas, have benefited from the drugs derived from a remarkable medicinal plant, the Madagascar periwinkle – known to many in tropical climates as a weed and to western gardeners as an easy-to-grow ornamental. Serendipity led to an educated guess and the hunch turned out to be correct. This tiny plant from Madagascar became one of Africa’s great gifts to humanity.