This year marks the 150th anniversary of the death of the Italian chemical physicist, Amedeo Avogadro.

This year marks the 150th anniversary of the death of the Italian chemical physicist, Amedeo Avogadro. Although commemorated for his molecular hypothesis, this was virtually ignored by chemists until after his death while his other research made no impact whatsoever. Avogadro's constant is, however, fundamental to molecular science.

When the American Chemical Society (ACS) celebrated its centenary in 1974 it issued car stickers that proclaimed: 'I know Avogadro's Number is 6.022 × 1023'. The implication was that, like C. P. Snow's claim for knowledge of the Second Law of Thermodynamics as a mark of good education, familiarity with Avogadro's number provides a similar test. The irony is that Avogadro never calculated the number and the eponym was only made 50 years after his death. The eponym, however, is justified on the grounds that Avogadro was one of the founders of modern molecular theory and of the standardisation of atomic weights. 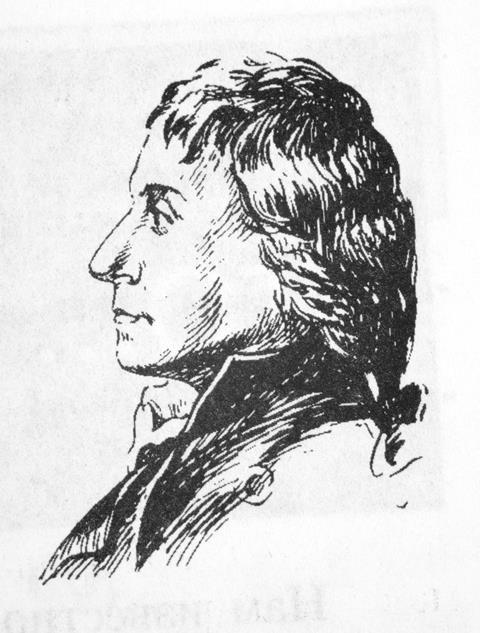 Lorenzo Romano Amedeo Carlo Avogadro, the Count of Quaregna and Cerreto, was born in the Piedmontese city of Turin in the kingdom of Sardinia on 9 August 1776. He was the son of a prominent civil servant who was charged under the Napoleonic rule of 1799 to reorganise the Piedmont Government. The family had a long tradition of legal service to church and state - indeed, the surname Avogadro is a corruption of the Latin advocato, meaning a barrister.

Avogadro graduated in law from the University of Turin in 1795, and was awarded a doctorate in canon law the following year. He then followed in his father's footsteps by working for the Government, changing administrative roles after the French invaded Piedmont in 1799. Like Antoine Lavoisier, who had also studied law, Avogadro began to develop scientific interests in his spare time. He was particularly excited by Alessandro Volta's development of the electric battery in 1800. Indeed his interest in electricity prompted him to audit a course of lectures and demonstrations on physics at the University of Turin and to join the local Academy of Sciences. In 1804 he submitted his first two scientific papers to the Academy. The subjects of these papers, the nature of insulators (dielectrics) and the electromotive series, remained dominant interests of Avogadro throughout his life.

In 1806, determined to help reverse his country's perceived backwardness in the sciences, Avogadro abandoned his legal career and began to teach mathematics and physics at a succession of Piedmontese schools and colleges. In 1809, he was appointed professor of natural philosophy at the former Royal College in Vercelli, east of Turin. Living under a French political regime, he was attracted to French scientific culture and so began sending his scientific papers to Jean-Claude de Lamétherie's monthly Journal de physique.

What marked Avogadro from contemporary chemists was his ability to apply mathematics to physical observations in an attempt to explain chemical relationships between elements and compounds (acidities, affinities, atomic volumes and specific heats). However, his peers largely ignored his publications and, unlike his fellow countryman Volta, Avogadro was indifferent towards a reputation outside his own country, which he never left to meet other scientists. A theoretician in an age of experimentalists, and hindered by the political situation in Piedmont, Avogadro's work, which was often out of kilter with what was going on in the rest of European science, was destined for neglect in his lifetime.

According to historians, Avogadro proposed his molecular hypothesis to reconcile John Dalton's suggestion that atoms combine gravimetrically in the simplest possible way, as when single atoms of hydrogen and oxygen combine to form one compound atom of water:

and Joseph Gay-Lussac's 1809 discovery of the integral law of combining volumes of gases:

(Berzelian symbols, which Avogadro did not adopt, are used for clarity.)

Gay-Lussac's experiments suggested that equal volumes of different gases ought to contain the same number of ponderable particles, provided that the physical conditions were constant. Yet, in practice, there was a glaring discrepancy between the expected ratio of volumes (in the case of water, 2:1:3) and the observed ratios (2:1:2). Moreover, the densities of the gaseous products were frequently at odds with those of the reactants. For example, in the case of the oxidation of carbon monoxide to form carbon dioxide:

the density of carbon dioxide (1.5196) was less than that of the half unit of oxygen (0.5518) that had gone into its formation. How could a gas that contained both carbon and oxygen be lighter than oxygen itself?

The gravimetric and volumetric information would make sense, Avogadro suggested in a French paper in 1811, if equal volumes of gases under the same physical conditions of temperature and pressure contained the same number of 'integral molecules', ie separable aggregates of at least two, but possibly more, particles. He was suggesting that both elementary and compound gaseous molecules divide at the moment of their reaction with other elementary and compound molecules to form the observed volumes of the products. For example, water was formed from a half-molecule of oxygen and two half-molecules of hydrogen.

Because the numbers of such aggregated (or integral) particles were the same in equal volumes, it followed that the ratios of their densities (relative to a chosen standard density) stood in the same ratio as their relative masses. In the four papers Avogadro published on the subject between 1811 and 1821 he suggested how, on the basis of this hypothesis, vapour density measurements might be used to determine molecular weights, assuming that oxygen of molecular weight 16 was at least a dimer. Later, this gave the familiar formula: molecular weight = 2 × vapour density. There was never any implication that the particles that made up integral molecules were physical atoms and Avogadro probably did not believe in the existence of such indivisible entities. He did not therefore, as was assumed by later chemists, distinguish between atoms and molecules.

Avogadro's suggestion, however, was ignored or dismissed as fanciful speculation (though the Frenchman André-Marie Ampère did play with the notion in 1816). At the time the concept of two-identical atoms of an element combining to form a stable dimer was inconceivable (and, indeed, remained mysterious until the emergence of the notion of electron sharing in the early 1900s). According to the chemical authorities of the day, Dalton and Jacob Berzelius, like atoms were self-repulsive, because they were surrounded either by mutually repulsive atmospheres of heat (caloric) or of electricity. As an added twist, Avogadro's model had gas molecules surrounded by atmospheres of caloric, leading him to suppose they must be the same size in all gases.

A further difficulty was that Avogadro could only determine the vapour densities of a handful of gases, and his theoretical calculations of the vapour densities of solid elements worked to four or five decimal places, based upon the weight of the element that combined with 16 parts (one volume) of oxygen, seemed entirely hypothetical. Finally, readers of his papers were probably confused by his cumbersome usage of the terms molecule (either an atom or molecule), integral molecule (usually the molecule of a compound), constituent molecule (one molecule of the element) and elementary molecule (one atom). In fact this molecular vocabulary was unique to French writers at the end of the 18th century and provides historians with the clue to understanding Avogadro's research programme.

The geographically isolated Avogadro belonged intellectually to the French research school of Lavoisier's colleague Simon Laplace, the mathematician and astronomer, and Lavoisier's chemistry disciple, Claude Berthollet.1 In his famous dispute with analytical chemist, Louis-Joseph Proust at the end of the 18th century Berthollet had insisted that constant composition was limited in application. Chemical composition was determined by physical conditions and concentration, since these affected the natural affinities between elements. Although Dalton had built the laws of constant and multiple composition into his atomic theory at the beginning of the 19th century, Berthollet's version of the Law of Mass Action (as it became known in the 1870s) intrigued Avogadro who spent much of his life trying to determine absolute affinity figures from physical data in support of the French programme. Gases were of a primary interest to him (as they were to Berthollet's pupil Gay-Lussac) because, unlike solids and liquids, their affinities were completely saturated.

Unfortunately, after a promising start, Berthollet's research programme, which involved the caloric theory as well as Laplace's idea of short range forces of attraction and repulsion, led nowhere and was abandoned by French scientists after about 1815. Avogadro, however, kept the faith; consequently his later work failed to enhance his stature among European chemists.2 His multi-volume physics textbook, Fisica de' corpi ponderabili, published when he was in his sixties between 1837 and 1841, showed him to have been left behind completely by the advances in physics in other countries.

Avogadro remained at Vercelli until 1820 when he returned to the University of Turin as its first professor of mathematical physics only to lose it a year later when political upheaval caused the chair to be suspended. During the next 10 years he returned to practice law, but was reappointed to the re-established Turin chair in 1834. In 1850 he and his wife retired to their family estates at Quaregna. He died on a visit to Turin 150 years ago on 9 July 1856. None of his obituaries mentioned the molecular hypothesis, though they described him as 'religious without intolerance, learned without pedantry, wise without ostentation, a despiser of pomp, without care for riches, not ambitious for honours; ignorant of his own worth and fame, modest, temperate, and lovable'.3

Although warmly regarded by the Piedemontese as a man of great learning and modesty, Avogadro had been little known outside the Italian peninsular during his lifetime, despite his French offerings. His career supports the views of sociologists of science who stress that historical, social, political and cultural factors play important roles in the emergence of scientific knowledge.4 Avogadro sat at the edge of the French scientific empire but lacked any personal contact with French (let alone English and Scandinavian) chemists. The result was intellectual isolation and invisibility.

This changed with the Risorgimento that culminated in the unification of Italy in 1870. Italians wanted to underwrite their new nationhood by looking for cultural heroes. Posthumously Avogadro became seen as one of the founders of molecular theory after Stanislao Cannizzaro showed, in 1858, and more forcibly at the Karlsruhe Congress of chemists two years later, how a rational and standardised system of atomic weights could be achieved by distinguishing between atoms and molecules. Cannizzaro put Avogadro's hypothesis at the forefront of chemical theory. The different quantities of the same element contained in one molecule of the free substance and in those of its compounds were then always integral multiples of a quantity that represented the atomic weight. This standardisation removed much confusion and complemented the views of contemporary organic chemists.5

By the 1870s the kinetic theory of gases had given credence to the atomic-molecular theory and it was the Bohemian chemist Josef Loschmidt (1821-95) who used the gas laws to calculate the number of molecules in a standard volume, the cubic centimetre. His value of 2.6 × 1019 has since been recalculated as 2.68 × 1025 m-3.
This is still known as Loschmidt's number. However, when Jean Perrin used Brownian motion to provide convincing proof of the existence of molecules in 1909 he used the gram molecule (mole) as his standard and calculated the value as 6 × 1023. Today this is defined as the number of molecules in 12 grams of the carbon-12 isotope. It was Perrin who suggested that this important chemical constant should be designated as Avogadro's number in commemoration of Avogadro's original insight in 1811.

Bill Bryson notes in A short history of nearly everything, American College students in the 20th century estimated that the stupendous figure of 6 × 1023 was equivalent to the number of popcorn kernels needed to cover the US to a depth of nine miles. Have Italian students a pizza version?

Bill Brock is emeritus professor of history of science at the University of Leicester, University Road, Leicester LE1 7RH.