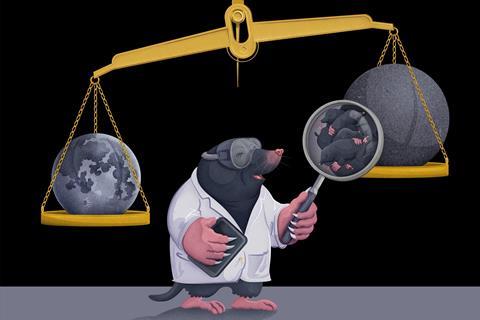 In chemistry, a mole is a really big number. This number (6.02 x 1023) comes from the number of atoms in 12 g of carbon-12 (this is the carbon isotope with six protons and six neutrons).

Moles allow us to compare the number of atoms or molecules in two or more different substances without writing out long numbers.

Infographic poster, fact sheet, worksheet and teacher notes. Display the poster in your classroom or on a projector. Alternatively, print it and use it as a handout.

Use the accompanying fact sheet and worksheet to get your students to apply their mathematical skills to three different types of problems involving moles.

The relationship between moles (mol), mass (g) and Mr (g mol-1) can be represented by this equation:

Remember that we said a mole is a really big number…

We can use Avogadro’s constant to calculate the number of atoms or molecules from the number of moles or vice versa, using the following relationship:

Amedeo Avogadro didn’t calculate the value of the mole, but he was the first to claim that different gases at the same volume and pressure would contain the same number of particles. Sadly, he died before anyone figured out the number that bears his name.