Kinaesthetic learners learn by doing rather than by seeing and hearing. Introducing objects to examine and discuss in class can enhance the learning experience

Expecting students to pay attention to an unbroken 50 minute chemistry lecture is a 'big ask.' I have always ensured that at least once in a lecture they have a 'minibreak' - perhaps Chemistry in the News, or Molecule of the Day, or a story about a famous chemist or discovery.1 Over a recent series of 18 lectures on organic reaction mechanisms, I introduced the novelty of passing an interesting and/or beautiful object round the class whilst talking about its chemistry. The students were physically involved in the experience, not just passively sitting and listening. 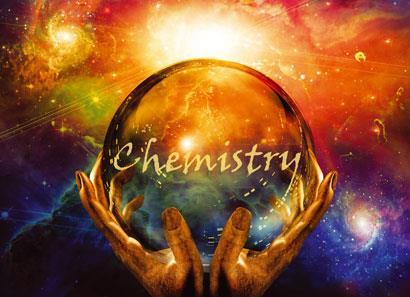 Some people are described as kinaesthetic or tactile learners; they learn best by active 'doing' rather than in the usual visual or auditory modes.2 I believe, however, that not just these particular students but everyone will enjoy a brief physical hands-on activity, during a lecture.

I deliberately chose objects that had nothing to do with the subject matter of the lecture; many were not even organic in origin. The idea was to give the students a few minutes to relax, unwind, and refresh their minds - rather like a palate cleanser between the courses in a restaurant. I encouraged them to touch and feel the objects whilst considering what they were made of. I think it's vitally important to exercise our sense of touch; looking at pictures of things is not enough. For want of a better title, the interludes were called Touch and Think. I wanted to convey the idea that scientific knowledge and aesthetic appreciation are not antagonistic but rather they enhance each other. Too often the public misguidedly thinks that scientists 'destroy the magic' when beautiful things are analysed and explained. My students were persuaded, I hope, that such a belief is nonsense!

Over the lecture series period, we looked at various categories of objects in these brief Touch and Think sessions. 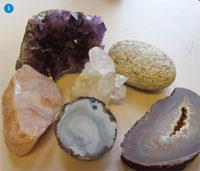 Figure 1 - A selection of minerals and crystals

During the first few lectures we looked at minerals and crystals. Some of these are shown in fig 1. We considered the chemical make-up of granite, amethyst, quartz and agate, and how so much of the substance of the world (except for its iron/nickel core) is made up of the three 'superstars' of the periodic table - oxygen, silicon and (perhaps surprisingly) aluminium - with the rest of the elements merely minor players. I told the story from Greek mythology of how amethyst got its name and how the ancients believed that an amethyst brooch or amulet would enable them to drink wine without getting drunk. We considered the trace elements that are responsible for colouring quartz purple or pink. With respect to the crystalline objects, I ridiculed the mumbo-jumbo that is spouted by proponents of 'crystal healing' (.they vibrate in harmony with the body's natural resonating quantum energy force-fields.), but I told the students not to be too cynical - crystals certainly can contribute to a feeling of well-being, just like any other beautiful thing such as a waterfall, a rainbow or a sunset.

The purpose here was not just to give the students an interlude away from reaction mechanisms, but hopefully to change their attitude to things. For instance, with the granite river-stone I wanted them not to think 'Huh, it's a rock, just a rock - boring!' but rather 'This is actually a beautiful rock, it's strangely pleasurable to weigh it in my hand and feel its texture. I'd like to know its history, how it got to be this shape, and understand its structure and composition.' An expression of this idea in educational terminology might be 'creating a nexus between the cognitive and affective domains of the student psyche.' The cognitive side of the mind refers to knowing and understanding (in this case the chemistry) whilst the affective side involves feelings, emotions and aesthetics. 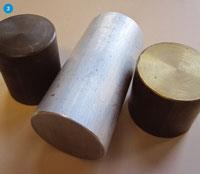 In another lecture, we looked at various metals. The students hefted ingots of metals (fig 2) from hand to hand trying to guess their weight; brass 1.480 kg, iron 1.063 kg, and the larger aluminium sample only 0.908 kg, a striking example of the lightness of the latter and why of course it is so useful in the aircraft industry. We considered where these various metals come in the full spectrum of metal density from lithium to osmium. We thought briefly of the difficulty of winning aluminium from its ore, and why plentiful cheap hydroelectricity is necessary (as in the South Island of New Zealand, for example). 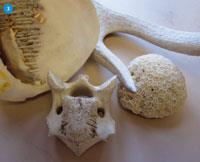 Figure 3 - Seashell, antler, coral and bone are calcium based materials

Calcium-based natural objets d'art, namely seashell, coral, bone and antler (fig 3) were the focus of other sessions. We thought about the differences between antlers and horns, the former the same as bone (mainly a form of calcium phosphate known as hydroxyapatite) and the latter made of the protein keratin, similar to hooves, nails and feathers. I encouraged the students to appreciate the wonderfully strong but light honeycomb construction of the vertebra and how each face could articulate neatly with the corresponding faces of the bones on either side. Referring to the shell, I showed them the trend towards lower pH of sea-water over the last hundred years and the predicted acceleration of this fall in the near future as more carbon dioxide dissolves in the oceans; this will make it harder for shellfish and coral to lay down an adequate thickness of calcium carbonate and, it is feared, will lead to a possible mass extinction of such creatures.

These samples of igneous rock known as andesite (fig 4) are of particular interest. What makes them special to me is that I collected them from the summits of the four highest mountains in New Zealand's North Island in one hard 18 hour day of climbing and driving. These are the volcanoes Ruapehu, Taranaki, Ngauruhoe and Tongariro. Andesite is composed of a variety of minerals (such as plagioclase and pyroxene) but not surprisingly they are all complex aluminosilicates of one form or another. 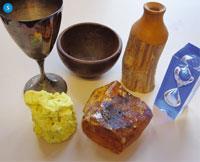 We also explored a number of other objects (fig 5). There is a lump of kauri gum, the hardened resin from New Zealand's largest native tree; it is similar to amber though generally not as old. Kauri gum was used for making varnishes and floor-coverings in the days before synthetic polymers, and for the latter part of the nineteenth century was Auckland's chief export. We thought about how it is derived from certain diterpenes by free-radical induced polymerisation and we considered the structure of the monomers in relation to the five-carbon isoprene building blocks.

The polymerisation of alkenes is similarly involved in the production of Perspex [poly(methyl methacrylate)], exemplified by the attractive hour-glass. We looked at the extraordinarily tough material, polycarbonate, and connected this to the well-known concern that its monomer, bisphenol A, may have dangerously estrogenic properties. (In this one case the chemistry was directly relevant to my lectures; I used the synthesis of bisphenol A from acetone and phenol as an example of the mechanism of electrophilic aromatic substitution.)

Several wooden objects were passed round the class. This is hardly a novel experience, but I selected interesting examples: part of a stem from the New Zealand native manuka tree fashioned at one end into a vase (so simultaneously man-made and natural), and a simple bowl carved many years ago from a beam that had spent centuries in an English country church. (The original oak tree could well have been growing at the time of the Norman Conquest.) We took the opportunity to think about the very different structures of the two principal polymeric components of wood - cellulose and lignin.

The silver goblet shows what happens to silver when exposed to a normal household atmosphere that inevitably contains traces of hydrogen sulfide (from cooking and from human 'gaseous effluvia').
I told the students that I could reverse the reaction by setting up an electrochemical cell with the silver in contact with aluminium, but I preferred to leave it 'dirty' as close inspection shows the patina has many different colours, not just black, and is rather attractive. Evidently the layer of silver sulfide is sufficiently thin for interference of visible light to occur as it reflects from the top and bottom surfaces, as happens with oil drops on a puddle.

The lump of sulfur was the background to considering the production of sulfuric acid, the world's leading industrial chemical. One of the main uses for this in New Zealand, where agriculture is so important, is to react with phosphate rock to make the fertiliser 'superphosphate.'

In the last lecture the guest material was chocolate and for some reason this was the only object that the students did not return to me at the end of the class. We thought about its composition - triglycerides, sucrose, theobromine, 2-phenylethanamine.

At the end of the course the students gave feedback. No negative opinions at all were passed about the Touch and Think sessions. A selection of these comments is shown in the box (note some of the students have English as their second language). 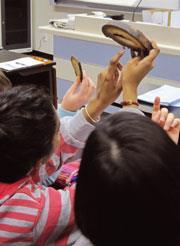 The 'touch and think time' is quite brilliant. Great interaction in class leads to improved learning and fun

I exspecaly like the props and intresting things he brings in

The 'touch and think' section of the lecture breaks things up nicely. Always interesting to hear/see chemistry in nature.

Loved the 'Touch + Think' - definitely do it again

From these comments, it appears, therefore, that the idea certainly paid off in terms of student engagement, and spending three or four minutes of lecture time was well worth it. With a large first year audience of over 200 students, the method would probably not work well, but it was ideal with my second year class of 40. Rather than simply having no more than an enjoyable break, I believe that students are left with a positive attitude that may last them a lifetime. Hopefully, the experience will enhance their natural curiosity and impart a desire to know the scientific make-up and properties of the materials that the students will come into contact with in everyday life; this would be a perfect manifestation of Forever Discovering - the motto of my university (Massey, New Zealand).

The technique described here is similar in a way to Show and Tell (where young schoolchildren are invited to bring something into class and talk about it) and so is not completely novel. However, I cannot find reference to a similar procedure being used regularly in chemistry lectures before, certainly not within my own many years of experience as a university lecturer or before that as a student. My own feedback is that I really enjoyed introducing this activity into the classes. I had a greater feeling of pleasurable anticipation for the lectures, knowing that I had planned something good for the students to experience each time. On the basis that the secret of being a good teacher is to enjoy the activity yourself, I can confidently say that the Touch and Think technique will have a beneficial impact on anyone's teaching. I recommend it!

Types of learning
A pedagogic hypothesis put to the test