Fuel cell-powered cars have been hailed as the answer not only to eliminating our reliance on diminishing fuel supplies but also to reducing CO2 emissions from vehicles. The portable and safe storage of hydrogen will be fundamental to the exploitation of fuel cells for transport.

Fuel cells are not new. They were invented in the late 1830s by British scientist William Robert Grove.1 They operate by converting a fuel - either hydrogen, or natural gas or untreated coal gas - into electrical power via a catalysed chemical reaction. There are several different types of fuel cell, depending on the electrolyte used. For example, alkaline fuel cells (AFC) use potassium hydroxide solution as the electrolyte, and proton exchange membrane (PEM) fuel cells use a proton conductive polymer as the electrolyte. 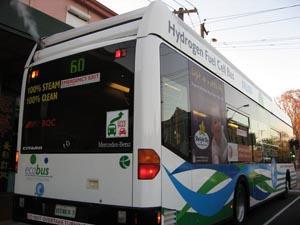 PEM fuel cells are of particular interest to car manufacturers, who have been trying to exploit this technology as a source of motive power since the early 1990s. These fuel cells have the advantage of a simple design and produce a high electrical potential (1.23V at 25o C) via the chemical reaction:1

A PEM fuel cell is shown in Fig 1. Hydrogen (the fuel), which is produced by reforming either natural gas or methanol, is admitted at the anode where it is oxidised to positively charged protons with the release of electrons. The protons are transported through the electrolyte membrane to the cathode, where they react with oxygen and electrons to form water (reduction). The electrodes are coated with a precious metal, usually platinum, which acts as a catalyst for the reaction. The electrical current that arises from the reduction of oxygen drives the electrical load (car). The PEM fuel cell does not emit any pollutants, the only byproduct is water. However, before fuel cell cars can become a reality several issues need to be addressed, including the portable storage of hydrogen. 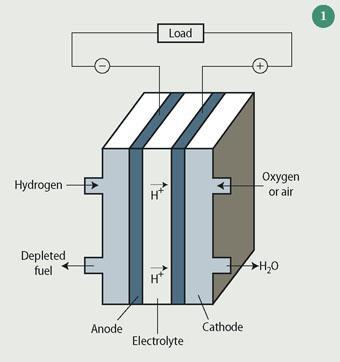 There is currently immense interest in hydrogen storage by industry, and international governments, and consequently many targets for hydrogen storage systems have been set up. The US Government together with the US car industry, for example, have set a target for such systems to provide at least 300 miles of travel without adding significantly to the weight or volume of a car.2 To travel this distance a PEM fuel cell-powered car would require 106,000 litres of gaseous hydrogen (at NTP) (see Box 1).3-6 In contrast, a petrol-driven car requires 54l of fuel for the same journey.

There are three main problems of storing this amount of hydrogen as a gas. First the current maximum capacity of a hydrogen cylinder is 80MPa (800 bar).7 At this pressure the density of hydrogen is 36kg m-3, so to store enough hydrogen for a 300-mile journey would require a 25l cylinder. While this is a reasonable volume, the cylinder would have to withstand very high pressures and therefore would be very heavy, which would present a problem for cars and vehicles generally. Secondly, the energy required to compress the gas represents nearly 10 per cent of the energy stored in the hydrogen.7 Finally, the safety implications of every car carrying a high-pressure hydrogen cylinder are considerable.

Chemists are currently investigating an alternative option for storing hydrogen for fuel cell-powered vehicles - ie a solid phase hydrogen storage system. They have translated the target volume of gas set by the US Government into a 'materials target', and estimate that such a material would have to be able to store at least 6.5 weight per cent hydrogen. Essentially chemists are looking to synthesise a material that will hold a large volume of hydrogen but at the same time be able to release the gas under mild conditions.

In principle there are two ways of storing hydrogen in a solid, which differ in the way hydrogen is bonded to the solid. One relies on the formation of a chemical bond between the solid material and a hydrogen atom - ie chemisorption - and involves breaking the hydrogen-hydrogen bond, and forming a new hydrogen to solid bond. In the other - physisorption - hydrogen molecules are adsorbed on the surface of the solid material by physical attraction alone, no new bonds are formed.8 Which type of bonding is involved will have implications for the temperatures at which the hydrogen is stored and released, and how much gas can be stored.

Of equal importance is the hydrogen capacity of the materials in question, which is measured in both volumetric and gravimetric (weight) per cent. Ideally these capacities should both be as high as possible, though a system target of 6 weight per cent hydrogen has been set by the US Department of Energy (DOE) and international car companies.

Materials on which hydrogen is physisorbed rely on their surface area to store the hydrogen and tend to have low volumetric capacities. However, they are generally based on light elements such as carbon and therefore have relatively high gravimetric densities.

The storage of hydrogen in a metal hydride involves the formation of a M-H bond, where M is the metal. In the simplest case the general reaction scheme is: 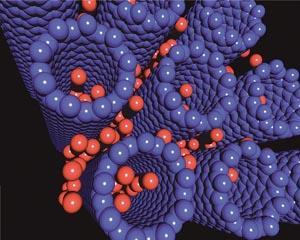 By modifying the composition and structure of metal alloys it is possible to promote the formation of mixed metal hydrides with potentially different hydrogen storage properties. Consider, for example, magnesium and its hydride, which is stable and decomposes at temperatures greater than 500K, and nickel and its hydride, which is so unstable it doesn't exist as the hydride. However, mix the two metals together and the resulting hydride, Mg2 NiH4, has a lower temperature of dehydrogenation than magnesium hydride.10 Thermodynamically the reaction has been improved by adding nickel - the hydride's enthalpy of formation has dropped from -77.5kJ mol-1 to -64.5kJ mol-1.11 Nickel is extremely good at dissociating hydrogen into atoms whereas magnesium is very poor. So adding nickel to the system has been very favourable, the temperature of desorption for the Mg2 NiH4 is >80K, less than that of MgH2. Unfortunately the nickel increases the weight of the alloy, and therefore reduces the weight per cent hydrogen that is stored from 7.4 weight per cent (in MgH2) down to 4 weight per cent. There is, therefore, a fine balance between capacity and absorption performance that must be maintained in our search for a new storage material. Magnesium hydride and magnesium nickel hydride are examples of interstitial hydrides. The hydrogen is absorbed into the metallic crystal structure and stored at sites within the lattice in a process that tends to be reversible.

Another class of hydrides are the complex hydrides, such as NaAlH4,  in which the hydrogen forms a tetrahedral anion with the aluminium, the charge being compensated for by the sodium cation. Once this hydride has decomposed to form aluminium and sodium the formation of the hydride tends to be very difficult. However, adding small amounts of titanium catalyses both the forward and reverse reactions.12

Both of these examples show that by changing the composition of the metal hydride we can promote the formation of the hydride and the release of hydrogen. Adding transition metals to existing materials will improve their hydrogen storage properties, either by forming a new material or by catalysing the reaction of hydrogen with the existing material. At this point, however, no metal hydride system exists which meets DOE targets, though progress is being made towards these goals.

Storage of hydrogen by physisorption is based on the attractive forces that a molecule experiences as it approaches a surface. These Van der Waals forces result from the attraction between the temporary dipole that exists within a molecule such as H2 and the surface of the material.13 The interaction is very weak, typically 2 kJ mol-1 (hydrogen bond is ca  20 kJ mol-1) and is dependent on the sixth power of the distance between the atoms.8 This adsorption process occurs entirely at the surface of the material and therefore the capacity of a material is dependent on the surface area of the material. Since the forces involved are so weak, hydrogen is stored at low temperature (77 K). 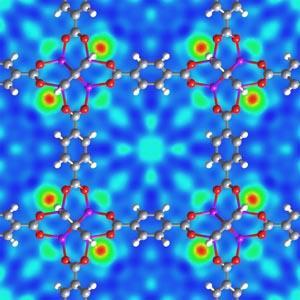 Hydrogen is physisorbed onto carbon nanotubes - graphite sheets that have been rolled up to form a tube. Since the tubes are hollow, they have an intrinsically high surface area. They can also trap hydrogen at a relatively high temperature as a result of their tubular structure and their diameter. If engineered correctly, the diameter of the nanotubes is small so that the hydrogen molecule is close enough to feel the Van der Waals interactions from both walls of the nanotube. The resultant strengthening of the interaction leads to an increase in the operating temperature of the storage material.14 A great deal of research is being done on these materials, and it has led to to more complex structures, such as metal organic frameworks (MOFs), being investigated.  Metal organic frameworks consist of 'corner units' which form the six-fold joints at the corner of cubes, and 'edges' which join the corners together. The corner units are typically zinc oxide, and the joiners are aromatic ligands. These MOFs can be modified by altering the reaction conditions and/or the various building blocks (reagents). In these materials hydrogen binds to the delocalised pi-electrons within the edge units via Van der Waals interactions.

Since this area was established large improvements in the hydrogen storage properties of MOFs have been achieved, primarily by increasing the surface area. However, improvements in the operating temperature of these systems must be made before they are viable as a practical storage medium.

Producing a practical hydrogen storage system poses a number of technological and scientific problems. These problems are being tackled by hundreds of scientists internationally, both in academia and industry. Within the UK, a Department of Trade and Industry (DTI) partnership between Johnsson Matthey, Oxford University Rutherford Appleton Lab and Ilika Technologies has been set up to investigate the storage of hydrogen. Fundamentally the problems appear to be relatively simple. A system must be developed which binds hydrogen sufficiently, so that it is stable at room temperature but will be released under mild conditions. The hydrogen must be available at a suitable rate by the addition of small amounts of energy.

*The lower heating value (or net calorific value) of a fuel is the amount of heat released by combusting a specified quantity (initially at 25o C) and returning the temperature of the combustion products to 150o C.