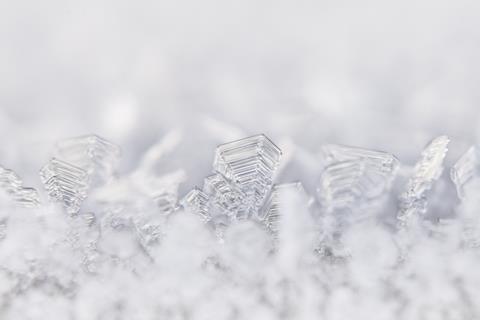 Most of the forms of ice that you’re familiar with – such as ice cubes, icicles or hailstones – don’t look very crystalline. These forms of solid water are in fact very ordered at the molecular level, but the way they form with lots of crystals building up at the same time can result in quite a lumpy and amorphous appearance.

Ice in the sky

However, if ice crystallises slowly, a single crystal can form. Crystals like this are often produced in the atmosphere but can have many different shapes. Some make columns, some make plates and others form the familiar snowflake. What all of these have in common is that their shapes are based on hexagons. As a result, they have the same angles between their crystal faces and so they affect light in regular and predictable ways.

Snowflakes, however, are a little different. Snowflakes form from microscopic water droplets. While these droplets are freezing, tiny variations in the temperature and humidity will cause different parts of the crystal to grow at different rates. The simple hexagon shape of the crystal therefore becomes decorated with patterned arms of ice.

Snowflakes have such intricate patterns and tiny crystal faces that all the light that falls on them is reflected, which is why snow is white instead of colourless like an ice cube. 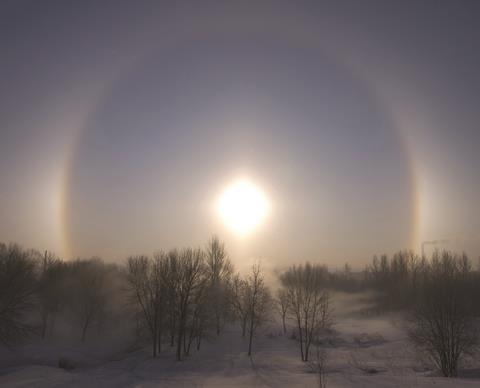 It is ice crystals like these that cause interesting visual effects when they interact with light from the sun. Light pillars, sun haloes and even false suns can sometimes be observed on cold, cloudless days.

The most well-known of these effects are parhelia (also known as sun dogs, or false suns). A parhelion appears when plate-like ice crystals fall horizontally. Sunlight passing through the crystal is diffracted at an angle so that an observer will see two ‘false suns’ either side of the real sun. Sometimes they can be seen as part of a halo around the sun.

A famous example of the appearance of a parhelion was during the wars of the roses. Three suns were seen to be rising at dawn prior to Edward IV’s victory at the battle of Mortimer’s Cross. This good omen led him to adopt the symbol of parhelia as his badge – it can still be seen pictured on the sign of the Mortimer’s Cross Inn.

Our activity in this edition is to learn more about the effects of ice crystals in the atmosphere. The links below are a great place to start. The most commonly observed effects are parhelia but you might be able to find some examples of light pillars and sun haloes.

Take care when observing the sky and never look directly at the sun with the naked eye, particularly with binoculars or a telescope! Be aware that although sun dogs may sometimes be hard to distinguish, they can be blindingly bright.