One in the eye for river blindness

It’s one of the greatest success stories in human health – a drug created from a product found in nature and given away freely to those who most need it, saving millions from debilitating blindness. Ian Farrell investigates the marvel of ivermectin 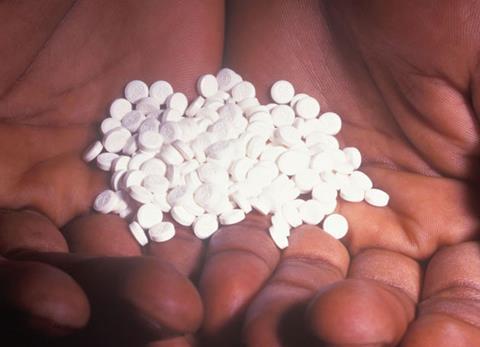 River blindness is a particularly nasty disease that affects some of the world’s poorest people. Also known as onchocerciasis, or Robles disease, it is most commonly found in parts of sub-Saharan Africa and South America and is caused by the nematode worm Onchocerca volvulus.The larvae of the nematode are spread by the bite of a specific type of black fly, but they are not ultimately responsible for the condition. It is actually parasitic bacteria Wolbachia pipientis, which live inside them in a symbiotic relationship, that cause the symptoms.

When a human is bitten by a black fly, the larvae of the nematode worms enter the body and slowly mature into adult worms. After mating, female worms produce thousands more larvae (known as microfilariae) that migrate towards the skin and eyes. When these die they release the parasitic bacteria, which trigger an immune response that causes terrible itching and severe lesions on the eye that can lead to blindness if left untreated.

Fortunately, there is a treatment for river blindness – ivermectin, a drug developed by the pharmaceutical giant Merck & Co. Ivermectin is thought to kill the microfilariae very gradually, avoiding the intense inflammatory response that occurs when they die naturally. In doing so, it relieves the agonising itching and halts the progression toward blindness. Additionally, the drug prevents adult worms from producing offspring for a limited time. By reducing microfilariae levels in the body, the likelihood of black flies being able to transfer them to other people is also reduced, and so the spread of the disease from person to person is slowed down.

Ivermectin is sold under a number of trade names, including Sklice and Stromectol in the US and Ivomec in Europe. But since 1988, under the name Mectizan, it has been given free of charge by Merck to aid agencies working in  developing countries under the Mectizan Donation Program (MDP).

The history of ivermectin goes back to the 1970s, when Merck was conducting a significant natural product chemistry research programme, with the aim of discovering new drugs. ‘At the time, the company was collecting samples from all across the globe,’ recalls Peter Meinke, executive director in discovery chemistry at Merck Research Laboratories, who himself worked on natural products, including this class.

Soil samples, pieces of bark and coral, and dried leaves were screened in assays against a range of animal and human diseases, explains Meinke. Then, if any interesting activities were seen, the organic compounds present were identified. 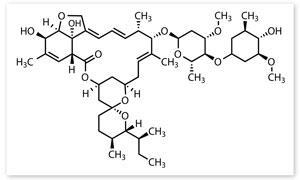 The chemical structure of ivermectin

The soil sample containing the compounds that eventually led to ivermectin came from a golf course in Japan, and were collected by Japanese scientists collaborating with Merck. In this sample Merck chemists found a new class of molecules, which they called avermectins, and discovered they had significant antiparasitic properties. The next step was to see if the avermectins’ effectiveness could be enhanced by making small changes to its highly complex structure.

‘Optimisation of the antiparasitic effect required some tremendous scientific breakthroughs,’ Meinke says. ‘We needed to be able to produce these incredibly complicated synthetic structures in large enough quantities for our chemists to work with, and ultimately identify variants that were both potent enough to be of use and safe enough to use in healthcare applications. But this was the 1970s – even figuring out the structure was a real technical achievement then.’

As part of the tweaking of the avermectins’ structures, one of Merck’s scientists, Jack Chabala, attempted to reduce one of the compound’s double bonds by hydrogenating it. The result was an increase in the antiparasitic properties of the molecules, while also making them safer. The most effective formulation came from hydrogenating a 80:20 mixture of avermectin A1a and A1b, which differ only by having an isobutyl or isopropyl group at the C25 position. Ivermectin was born.

Ask most people about fermentation and they will instantly think about the production of ethanol in alcoholic drinks. But chemists use a type of fermentation too when they are making natural products, like avermectins.

The structure of an avermectin is so complex that making it by traditional organic synthesis methods would be too complicated to be economically viable. Instead, researchers identified which bacteria in the original soil sample produced the avermectins in the first place, and got them to do the job instead.

This type of fermentation involves culturing the bacteria into a colony and harvesting the desired molecule. Next, changes are made to the bacteria’s environment to see what effect that has on molecule production. Changing the temperature, oxygen levels and feedstock can dramatically increase yields. In the case of avermectin, growing conditions were optimised to give the highest level of production, which gave the Merck scientists enough compound to work with, and eventually create the ivermectin drug.

Fermentation is still used today as a means for creating the avermectin precursor to ivermectin, and is an important tool that’s used by natural product chemists who are trying to investigate how drugs can be made from the complex organic molecules that are made by nature.

In total, the avermectin molecule contains five double bonds. In order to selectively reduce just one of them to create ivermectin, Chabala enlisted the help of Wilkinson’s catalyst. Named after its inventor Geoffrey Wilkinson, the eponymous RhCl(PPh3)3 is a 16-electron rhodium complex that catalyses the addition of hydrogen to alkenes to form saturated alkanes.

While Wilkinson’s catalyst will bring about the reduction of many unsaturated bonds, it tends to reduce cis alkenes in preference to trans alkenes. In this particular case, steric and electronic factors that are unique to the avermectin molecule also play an important factor in the catalyst’s highly specific activity.

Wilkinson’s catalyst is still used in the industrial production of ivermectin today. ‘You can recover it easily,’ says Meinke. ‘Rhodium is expensive stuff, so there are economic reasons for getting it all back, as well as environmental concerns. We use quite a low catalyst loading too, and make sure it’s never present in the final product.’

Having a greater potency than avermectin gives ivermectin the huge advantage of being a low dose drug. The effective dose of ivermectin is just 150–200 µg per kg of body weight, and this keeps microfilariae levels low for up to 12 months. Because the drug kills the microfilariae, and not the adult worms, it has to be taken for the 10–15 year lifetime of the worm. Ideally the drug is administered twice a year, although annually will still have a positive effect. Because it comes as a single pill, it is economical to produce and easy to transport and distribute, even in the most poorly developed infrastructures. Ivermectin can also be used preventatively. 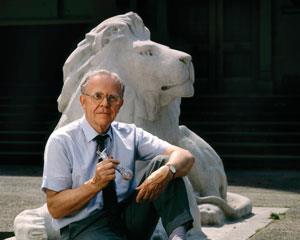 In was the early 1960s when Geoffrey Wilkinson started to look at phosphine complexes of ruthenium and rhodium, as part of his research at Imperial College London. One of the compounds he made was a square planar complex of rhodium (in its +1 oxidation state) containing one chlorine ligand and three triphenylphosphine ligands – this is the catalyst that now bears his name.

Wilkinson’s catalyst accelerates the addition of hydrogen across alkenes and alkynes to form saturated alkanes – a reaction that is used heavily in organic synthesis today. But despite its usefulness, and the countless pharmaceutical compounds that have been developed using his catalyst, Wilkinson’s motivation was blue-sky science – chemistry carried out in the name of curiosity and for the sake of knowledge.

‘This particular chemical reaction – catalytic hydrogenation – was developed in a university, at Imperial College London, as part of an academic research programme,’ remarks David Rees, past-president of the organic division of the Royal Society of Chemistry and vice president of medicinal chemistry at Astex Therapeutics. ‘Years later that academic research had a very clear application to the development of a drug [ivermectin] that has had a huge impact on human life. The clear message is that it is still a good idea to keep doing blue-sky, non-applied research into organic synthesis, because you just don’t know when it will become extremely useful.’ 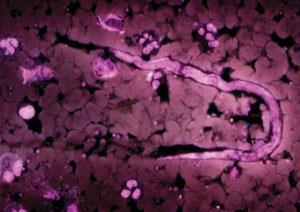 Although ivermectin was developed as a broad spectrum antiparasitic, it was quickly realised that it could be used to kill the microfilariae involved in river blindness. ‘O. volvulus is a parasite that’s in the same family as other parasitic worms, so ivermectin was tested to see if it had any effect and it did,’ says Meinke, who confesses that the drug’s discovery led to ‘a bit of a conundrum’ within Merck, as the company could not see how they could make any money from the drug.

‘How do you develop this cure to a serious third world disease when there is no possibility of it being viewed in the traditional pharmaceutical industry paradigm of “we’ll make this drug and have a large market”?’ Meinke asks, emphasising that the countries that would be in most need of ivermectin would also be the ones who could least afford it. ‘Ultimately it was decided to give the drug away, and the MDP came about.’

Over 25 years later, the MDP has dispensed more than a billion treatments across 35 countries and changed the lives of millions of people. Today it’s the longest running disease specific drug donation programme of its kind anywhere in the world.

Because ivermectin was first identified as a broad-spectrum antiparasitic drug, its applications are not limited to treating human medical conditions. It is also used extensively in veterinary medicine for both farm and domestic animals, often in combination with other drugs as a scatter gun approach towards parasites like ground worms, grubs and lice.

Dosage for domestic animals is typically lower than for humans, with some species being more susceptible to side effects than others. In dogs, the working dose of ivermectin is very low, just 6 µg per kg of body weight. While higher levels could target more parasites, there is the risk of more side effects too. These can result from the drug crossing over into the brain and interacting with receptors, but that doesn’t happen at lower doses, explains Meinke.

He adds that, of all dogs, collies are at the most risk from side effects, and the lowest safe dose for the drug is set according to the most sensitive species. Collies have a deficiency in the blood-brain barrier that makes them very susceptible to side effects from ivermectin, he says. As a consequence, the drug gets into their brains at higher levels relative to that seen in other dogs. 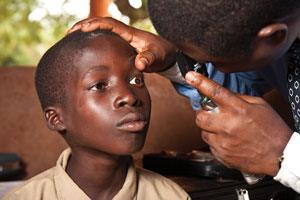 Talk to those involved in the treatment of river blindness and you’ll hear eradication spoken of as the end goal of treatment programmes. Indeed this is an achievable outcome: Colombia has recently announced the elimination of the disease – the first country in the Americas to do so, with Ecuador, Guatemala and Mexico hot on its heels. Brazil and Venezuela are currently adjusting their treatment strategies and expect to be free of river blindness by 2015.

All of these countries are beneficiaries of Merck’s MDP. ‘Lots of people don’t realise that pharma companies are ethical companies,’ says Meinke. ‘Many of the large ones have donation programmes going on, and this is Merck’s: to eliminate this scourge that is river blindness. Hardly anyone knows that we do this, even though it’s of huge benefit to humanity. It really does make me very proud to work for the company.’

Ian Farrell is a science writer based in Cambridge, UK