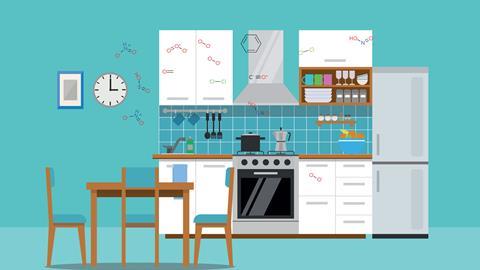 Are you ‘safely indoors’?

This article supports your teaching. Download specification points it links to (MS Word or pdf).

The chances are you have spent around 90% of your life indoors and 70% of that time cocooned inside your own home. Conventional wisdom has it that once inside – as long as there are no lit cigarettes and the windows are shut – we are safe from air pollution and its associated death statistics that frequent news headlines. But that isn’t true.

There is a growing realisation that most air pollutants found inside originate from indoor items or activities. A number of studies have shown concentrations of some molecules in air are frequently two to five times higher indoors than typical outdoor concentrations.

Combustion sources – such as gas hobs, wood-burning stoves and candles – are big culprits. But building materials, including paint, floorings, furniture, textiles and electronics, all release potentially harmful molecules into the air around them. As do personal care products, cleaning agents and air fresheners. Heating food is another significant contributor: toasting bread and frying meat are notorious activities for particulate matter generation.

However, our understanding of indoor air pollutants – where they come from, what they are, their quantities, how they behave and change in air, and their health effects – is still decades behind that for outdoor air pollution. ‘There is a huge opportunity to reduce pollution exposure by tackling the indoor environment,’ explains Richard Corsi, from the University of Texas at Austin (and now at Portland State University), US. 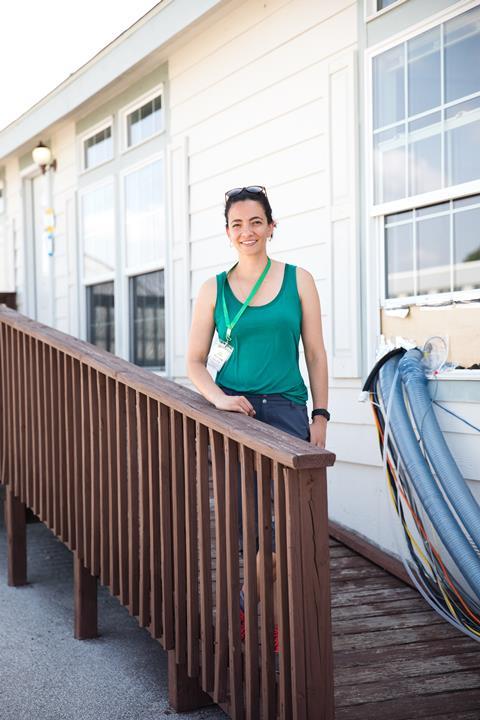 In June 2018, the largest project yet to observe the chemistry of indoor air took place in a three-bedroom test house on Richard’s university campus in Austin. HomeChem (House Observations of Microbial and Environmental Chemistry) was coordinated by two professors: University of Colorado Boulder’s Marina Vance and Colorado State University’s Delphine Farmer.

At the end of May, 60 researchers from 13 different North American universities and five industry or government labs descended upon the test site. They lugged along with them $4.5 million of analytical equipment to scrutinise the test house air. They put some instruments in the house and the rest filled four adjacent shipping containers. They drilled holes into the house’s walls, and used tubes to suck air from the house into the analytical instruments inside the containers. The instruments then spent four weeks monitoring the air chemistry inside the house.

Background measurements of the unoccupied house were collected first, to identify pollutants coming from the building and its contents. Volunteers then started to occupy the house. Some days they just hung out to see how their presence, and personal care products, changed the air chemistry. Other days they cooked (normally stir fries), again and again – repetition is a vital part of all scientific research. Some days they cleaned repeatedly with either chlorine or terpene-based cleaners. Other times they did both: cooked breakfast, then cleaned, cooked lunch, then cleaned, and so on. ‘We chose activities that are representative of everyday life inside a home environment,’ explains Marina. ‘Everyone knows that you do some chemistry when you cook and clean, you can smell it. These activities seemed like an obvious first step,’ says Delphine. 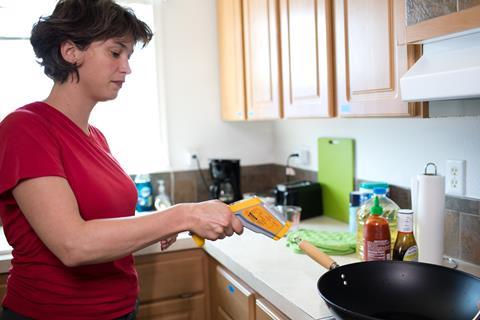 On two days the team went all out, hosting a pretend Thanksgiving Day. They cooked sausages for breakfast, followed by a traditional Thanksgiving lunch of turkey and side dishes. Cleaning took place at various times, and scented candles were lit. ‘We chose Thanksgiving because it’s a complex day,’ Marina says. ‘We knew that every instrument was going to measure something on Thanksgiving,’ adds Delphine.

Mass spectrometry, either on its own or combined with other separation techniques such as gas or liquid chromatography, is one of the most powerful tools in an analytical chemist’s arsenal. This article provides an excellent example of how scientists are applying mass spectrometry in the field. The application described, to monitor air pollutants inside our homes, is one every student can relate to, and will be valuable extra reading for students studying 16–18 chemistry courses, including vocational courses.

Dozens of instruments took part in HomeChem, each capable of measuring a single chemical or a class of compounds. Instruments owned by Delphine’s group, for example, observe organic compounds. ‘I like thinking about organic carbon and its sources and fates. The instrumentation that I brought to HomeChem allows us to probe different aspects of that area,’ she explains. 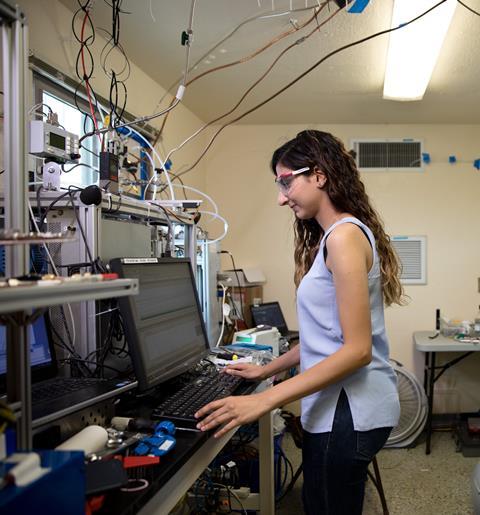 Her group used a time of flight chemical ionisation mass spectrometer (TOF-CIMS) to detect and quantify gas-phase organic compounds. This instrument can observe tiny amounts of these gases present in the air. ‘We also brought with us a series of gas chromatographs to look at very volatile organic compounds such as propane and chloroform,’ Delphine says.

Her group also measured organic carbon in the particle phase, using an aerosol chemical speciation monitor (ACSM) coupled to a mass spectrometer. Many of the other participating research groups also contributed state-of-the-art mass spectrometers set up to closely probe different gases and particles, most of them in real-time.

Nitrous acid is a known source for hydroxyl and hydroperoxyl radicals, which are a key species in ozone formation outdoors. It was only recently realised that these radicals also form indoors. ‘A lot of what drives hydroxyl radical chemistry outside is sunlight. So the prevailing view was that indoors there is not enough sunlight to produce the radicals,’ explains Philip. ‘We now realise there’s a lot more potential sources of radicals from inside that may not require sunlight, or still may require sunlight through windows.’ What the sources are and how they produce the radicals is still being figured out.

Marina’s group contributed a number of scanning mobility particle sizer (SMPS) spectrometers to HomeChem. ‘My group is in charge of particle size distribution measurements,’ she says. ‘We have a suite of instruments that can characterise by counting and sizing particles from 1 nanometre in diameter all the way up to 20 microns.’

Marina and Richard’s groups are also working together to test some low-cost, consumer-grade air quality monitors inside the house. ‘There are some low-cost sensors built by research groups at other universities being tested as well,’ says Marina. There has been a lot of concern about the accuracy of these, and HomeChem’s preliminary results suggest the ones being tested are ‘a mixed bag’ in terms of accuracy, she explains.

Some gases and particles in air – both inside and outside – settle onto surfaces (and might be ejected again at a later point). The researchers placed small sheets of glass around the test house to sample pollutants that settle onto surfaces inside the home. These samples will also be analysed in different ways, by multiple research groups.

Glass makes the analytical data easier to understand because the pollutants sit on the surface rather than absorb into it. However, paint is usually more prevalent inside houses than glass. At HomeChem, samples were also collected from an area of simplified paint that had been formulated especially for this purpose, explains Jose Jimenez from the University of Colorado at Boulder, who is co-leading this part of the HomeChem project. ‘Every day at seven in the morning we clean the paint with a solvent to collect whatever has been deposited.’

Piecing together the puzzle

At the end of the month, the research groups packed up their instruments and headed home to start data quality control and analysis. They will all share around their data; this is one of the project’s most important aspects. Indoor air composition is always complicated due to the vast number of chemical species present. The more details everyone has about the chemicals, the easier it is to piece together where each comes from and how and when they transform into something else.

They’ll also share data with a collaborating team of computer modellers. They will use the data to check and improve models for indoor air pollution. This close interaction between the experimentalists and modellers mimics how things have worked in outdoor atmosphere chemistry research for decades. It is these models that will eventually help policymakers improve indoor air quality.

The researchers involved in HomeChem view their project as a springboard for many more experimental studies of indoor air chemistry. ‘The main point of HomeChem is to open the can of worms of indoor chemistry and throw questions back to the community of scientists,’ says Marina.

She does, however, expect evidence from HomeChem will be sufficient to recommend people use cooker hoods whenever using a hob; they remove lots of air pollutants from cooking, not just the condensation for which they are designed. ‘We also strongly recommend people clean their houses with open windows and according to company directions,’ adds Marina.

I confess I’ve previously paid little attention to the safety information Marina refers to that’s printed on the back of all cleaning products. I have now. Take a look yourself and you’ll see statements such as ‘use only in well-ventilated areas’ and ‘do not use together with other products, may produce chlorine gas’. That’s right, among other nasties you could be accidently breathing in small amounts of a highly poisonous gas while cleaning your home. I suspect I’m not alone in only just realising this!

Download this article and all of these teaching ideas and resources from rsc.li/2wkXpI9

Mass spectrometry, either on its own or combined with other separation techniques such as gas or liquid chromatography, is one of the most powerful tools in an analytical chemist’s arsenal. This article provides an excellent example of how scientists are applying mass spectrometry in the field. The application described, to monitor air pollutants inside our homes is one every student can relate to, and will be valuable extra reading for students studying 16–18 chemistry courses, including vocational courses.

Relevant to your syllabus

Mass spectrometry, and in particular time-of-flight mass spectrometry, can be confusing to students because of the number of stages involved in the process. In this hands on activity, students sort triominoes information cards about the mass spectrometry process into groups according to the stage to which the information applies. Download the set of cards from the Education in Chemistry website: rsc.li/2wkXpI9.