Recycling plastic bottles prevents the plastic from going to landfill, saves energy and reduces our dependency on oil. But what do we have to do to put the bottle back on the supermarket shelf?

Most clear plastic bottles are made from the polyester, poly(ethene terephthalate), or PET. Triangular arrows surrounding the number 1 stamped on the bottle identify the plastic as PET. High-density poly(ethene), HDPE, is used to make milk bottles (number 2 in the recycling symbol). The caps and rings that keep the bottles’ content fresh or fizzy are made from poly(propene), PP. Like all plastics, PET, HDPE and PP are polymers – their molecules are long chains made from repeating units of smaller molecules. In the case of PET the repeating unit is ethene terephthalate (scheme 1); in HDPE it is ethene (fig 1), and in PP is propene (fig 2). 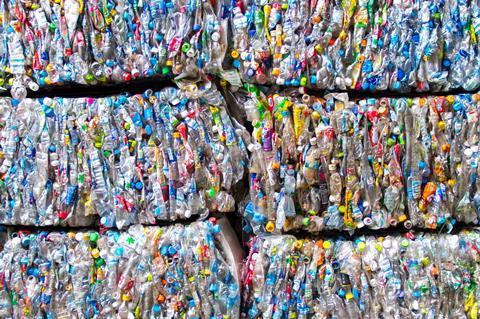 A large amount of plastic waste is shipped abroad, often to Asia, where it is processed to be re-used in low-grade products like fibres for clothing, carpets or plastic strapping. Some of it, PET in particular, is made back into bottles at plants like Closed Loop Recycling (CLR), in Dagenham, Essex.

Used plastic bottles arrive at CLR in bales weighing about 500 kg and containing around 12 500 plastic bottles, along with items like carrier bags, yoghurt pots, and cans. The contents of the bales have to be sorted because failure to separate the plastics will cause problems with the end product.

Nick Cliffe, marketing manager at CLR, singles out polyvinyl chloride, PVC, poly(chloroethene) (fig 3) as the main ‘headache substance’ for CLR. PVC is commonly used in blister packaging for batteries as well as in plastic pipes, and as Cliffe says ‘has similar properties and looks like PET to the naked eye, but it blackens at 200°C’. A tiny black speck in a recycled PET bottle, he explains, will weaken it so much it could explode when filled with fizzy drink, and just one PVC bottle in a batch of 10 000 PET bottles could ruin the entire batch. Separating all the different types of plastic is a challenge, but CLR has found that the solution lies in exploiting the chemical differences between the different polymers.

‘Different polymers reflect and absorb different amounts of light, and at different wavelengths, especially in the near infrared’ explains Cliffe. ‘As the bottles pass by a series of “optical sorters”, ie bright bulbs emitting in the near infrared, different polymers trigger a jet of air, which blows the bottle down a chute. This is also useful for removing coloured PET, which can’t be included in the final product but can be recycled for uses where colour is not so important’.

Some bottles can make it past the optical sorters so another difference is exploited once the polymers have been shredded ready for processing: PET is more dense than water, while polyalkenes, like HDPE and PP, are less dense. So when the flake mixture is dumped into a tank of water, the PET flakes sink to the bottom, while the floating HDPE and PP can be skimmed off the surface. Recovered PP is recycled for low-grade uses.

A final check of the PET flakes is done using Raman spectroscopy. In this process each flake is hit with a laser, causing the electrons in the flake material to absorb the laser energy and jump into a high-energy state. As the electrons drop back down to their original energy state, they release the absorbed energy as light. The range of wavelengths of light emitted (the spectrum) depends on the chemical structure of the compounds containing the electrons. Thus individual atoms and bonds can be identified. CLR uses Raman because the emitted light is a ‘unique molecular fingerprint’ of whatever is in the flake. When the Raman spectrum of a rogue flake or contaminant is detected it is ejected from the mix with a jet of air.

If the PET bottle is going to be re-used for food or drinks packaging it must have all contaminants removed. At CLR, this is done by stripping off a layer of plastic, a few micrometres thick, from the surface of the PET flakes in a reaction that Cliffe describes as a ‘chemical peel’. In fact, the reaction is a depolymerisation: the reverse of the polymerisation reaction that originally formed the plastic. 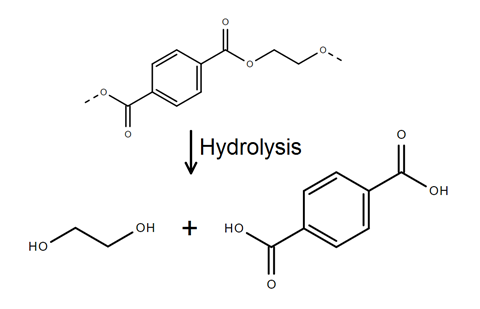 Scheme 1: PET, poly(ethene terephthalate), and its hydrolysis to ethylene glycol and terephthalic acid

Each PET flake is coated with a vaporised solution of sodium hydroxide. The coated flakes are heated to 200°C in a rotating oven. At that temperature, the hydroxide ions attack the ester groups in the polymer chains nearest the flake surface. This hydrolysis reaction breaks up the PET chains into terephthalic acid and ethane-1,2-diol (ethylene glycol), the same two compounds which were originally used to make the polymer (scheme 1).

The terephthalic acid forms sodium terephthalate,with the sodium from sodium hydroxide. This salt is water soluble and can be washed away, along with the ethane-1,2-diol. Volatile organic contaminants, such as the flavouring limonene, evaporate in the heat. Other contaminants, mostly dried remnants of the original drink, are also removed by washing. The PET flakes that are left behind are clean enough to be melted down and made into new bottles.

A similar process to hydrolysis, ie methanolysis, is used to depolymerise PET into its core ingredients by the Eastman Chemical Company in the US. Methanol at temperatures above 250 °C attacks the ester linkages in the PET chain, breaking it down into dimethyl terephthalate and ethane-1,2-diol. A catalyst such as sodium methoxide can be used to speed the reaction up. The product, dimethyl terephthalate, can be repolymerised or hydrolysed to form terephthalic acid.

Mitsubishi Heavy Industries in Japan has developed a variation of this reaction that uses supercritical methanol (ie methanol which is heated at high pressure to beyond its boiling point). At these conditions the reaction is faster and does not require a catalyst.

Ethane-1,2-diol can be used instead of methanol to attack the PET ester linkages. This reaction (glycolysis), which also requires high temperatures and pressure and can be catalysed by a compound such as zinc acetate, forms bishydroxyethyl terephthalate and shorter PET segments called oligomers. These products can all be re-polymerised to make fresh PET.

George Roberts, professor of chemical and biomolecular engineering at North Carolina State University, US, has recently developed a method for reacting PET with ethane-1,2-diol in a large corkscrew-type chamber, allowing the process to run continuously. As the extruder screw turns, it melts the PET, allowing it to react more rapidly with ethane-1,2-diol to form shorter PET oligomers. ‘Once we have these shorter segments, the viscosity of the material is significantly reduced. We can take out any solid, liquid or vapour impurities and wind up with a material that can be put through a normal polymerisation process’, said Roberts. ‘We think it is more economical to make the oligomer because most polyester processes involve two stages, and the second stage starts with an oligomer.’ 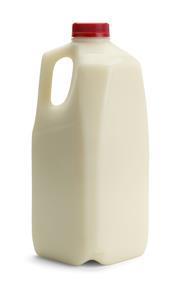 Natural, white, HDPE can also be turned back into a food-grade plastic containers. The bottles are heated to 120 °C at low pressure. When the plastic melts, the contaminating remnants of the drink to simply evaporate. The molten plastic is then filtered through a fine mesh, cut into pellets and cooled, ready to be turned into new milk bottles.

So next time you drop your plastic water bottle in the recycling bin, think about the chemical journey it will take before it ends up as just another bottle.