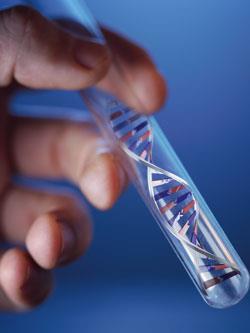 For half a century, the field of metal-based anticancer drugs has been dominated by the precious metal platinum. The discovery of platinum's anticancer properties was made by chance during an experiment in 1965, conducted at Michigan State University by Barnett Rosenberg. Rosenberg used a platinum electrode to apply an electric field to a colony of E. coli,  which was observed to inhibit their growth. A diligent investigation into the cause of this effect concluded that the platinum electrode was breaking down to generate platinum(II) species in situ,  which was stopping the cells from multiplying.

This observation led to cis-diamminedichloroplatinum(II), commonly known as cisplatin, being approved by the American Food and Drugs Administration (FDA) for cancer therapy in 1978. It has since become the most widely used anticancer drug, with an estimated 70% of patients receiving the compound as part of their treatment.1

Cisplatin was heralded as a completely novel type of antitumour agent, and its discovery enticed a veritable army of inorganic chemists to devise and test other precious metal-based therapies.

Disappointingly however, fifty years and countless clinical candidates later, there have only been two more worldwide drug approvals for precious metal-containing anticancer drugs: carboplatin and oxaliplatin - both of which are direct analogues of cisplatin (fig 1) - approved in 1993 and 2002 respectively.

Fig 1 - The chemical structures of cisplatin, carboplatin and oxaliplatin

The mode of action of these platinum complexes is known: the chloride or dicarboxylate ligands are hydrolysed within the cell to generate a bis-aqua species, which binds irreversibly to DNA - usually to two adjacent guanine bases - (fig 2) and the cell, unable to replicate, defaults to apoptosis (that is, controlled cell death). 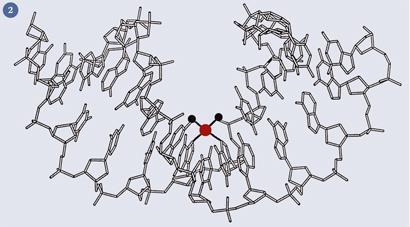 From platinum to ruthenium

Whilst the chemotherapeutic success of platinum is undeniable, it is by no means the perfect drug. It is not effective against many common types of cancer, drug resistance is common and it has a deplorable range of side effects, which can include nerve damage, hair loss and nausea.

To overcome these limitations, some compounds based on ruthenium have been developed and tested against cancer cell lines. These compounds tend to cause fewer (and less severe) side effects compared to platinum drugs.

Ruthenium's properties are well suited towards pharmacological applications. It can access a range of oxidation states (II, III and IV) under physiologically relevant conditions. Also, the energy barriers to interconversion between these oxidation states is relatively low, allowing for ready oxidation state changes when inside the cell. In spite of this flexibility in oxidation state, ruthenium complexes display relatively slow ligand exchange rates in water (fig 3) - its kinetics are on the timescale of cellular reproduction (mitosis), meaning that if a ruthenium ion does bind to something in the cell, it is likely to remain bound for the remainder of that cell's lifetime. Furthermore, ruthenium tends to form octahedral complexes, which gives the chemist two more ligands to exploit compared with platinum(II) complexes, which adopt a square planar geometry. Ruthenium can also form strong chemical bonds with a range of different elements of varying chemical 'hardness' and electronegativities, meaning that ruthenium can bind to a range of biomolecules, not just DNA.

Why is ruthenium less toxic?

One hypothesis as to why ruthenium compounds are less toxic in general than platinum drugs is 'Activation by Reduction'. This theory is based on the observation that ruthenium(III) complexes are more inert than ruthenium(II), which can partially be attributed to its higher effective nuclear charge (Zeff). Also, cancerous cells tend to have a more chemically reducing environment than healthy cells, owing to their lower concentration of molecular oxygen (due to their higher metabolic rate and remoteness from the blood supply). These two factors taken in parallel mean that compounds of ruthenium can be administered in the (relatively inert) III oxidation state, causing minimal damage to healthy cells, but being reduced to the (active) II oxidation state in cancer cells.3 Recently, however, this theory has come under considerable criticism and even the question of how ruthenium compounds enter cells has been the subject of some literature debate.

Ruthenium is a transition metal in group 8 - the same chemical group as iron. Iron, in spite of its potential reactivity and biological toxicity, is a key element without which most cells cannot survive. In fact, nature has developed considerable machinery to sequester, transport and make use of iron. The fact that iron and ruthenium are in the same chemical group has led to some chemists postulating that it is capable of taking iron's place in some proteins, most notably in the chaperone and uptake protein transferrin.4 However, others remain skeptical that the two metals are similar enough to be interchangeable; specifically, ruthenium binds tighter and more slowly than iron and has a preference for 'softer' ligands. Nature has also developed extremely high affinity iron binding sites (eg transferrin holds iron with a binding constant of 1023 M-1), and it has been questioned whether ruthenium can outcompete iron in these contexts. Another suggestion is that ruthenium can bind to other sites on transferrin, and 'piggy-back' into the cell when iron is taken into the cell (fig 4).5 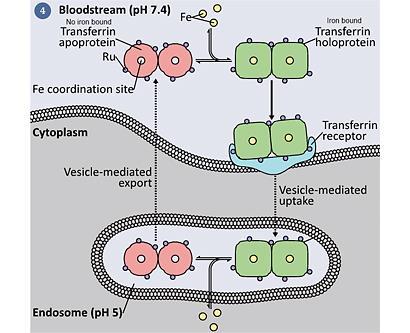 Two ruthenium compounds are currently undergoing clinical evaluation as anticancer drugs (as far as the author is aware): NAMI-A and KP1019 (fig 5). A great deal of the remaining literature can be categorised as follows:

In 'classical' coordination compounds, the metal is surrounded by Lewis bases with lone pairs. The compounds KP1019 and NAMI-A fall into this category. Given that these compounds have some ligands that can feasibly be hydrolysed (eg chloride, DMSO), it is thought that the actual 'active' molecules which reach the cancer cell are unlikely to be the same as the molecular structures shown (fig 5).

KP1019 and NAMI-A appear to be quite similar structurally (both are Ru(III)+ complexes with chloride and heterocyclic ligands and a heterocyclic counterion) yet they display remarkably different types of anticancer activity: KP1019 is active against primary cancers (ie the main tumour mass which forms first in a patient), whereas NAMI-A is active against secondary tumour cells (ie the metastases which form after cells from the primary tumour have moved to a different organ, eg via the bloodstream). Currently there are very few treatment options for secondary (metastatic) cancers, and the prognosis for patients who develop this form of the disease is much worse.

An organometallic complex is often defined as a molecule with a distinct metal-carbon bond. Although they have a reputation as being unstable compounds, better known for spontaneous combustion than therapeutic effects, some ruthenium organometallics have displayed high water- and air-stability and an interesting spectrum of anticancer activity.

Fig 6 - An example of a RAPTA complex

Arguably the most successful ruthenium organometallic anticancer complexes have been the so-called 'RAPTA' complexes (fig 6). RAPTA complexes are characterised by the presence of a facially-coordinated aromatic ring (which is relatively hydrophobic) and a PTA (1,3,5-triaza-7-phosphaadamantane) ligand (which is highly water soluble). Oddly, RAPTA complexes display a similar spectrum of activity to the coordination complex NAMI-A, in spite of their apparent differences in oxidation state, ligands, charge and geometry.

The ability of ruthenium species to form multinuclear and supramolecular architectures has been known for some time, but their application to medicinal chemistry has only been explored recently.

Some particularly interesting strategies include ruthenium-platinum mixed-metal compounds,6 ruthenium cluster complexes,7 ruthenium DNA intercalators8 and supramolecular 'Trojan Horses', which contain a cytotoxic payload that is released upon entry to the cancer cell9 (fig 7). 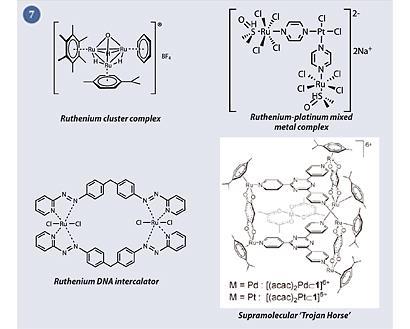 Recently, chemists have developed compounds where a precious metal is chemically linked to an 'organic directing molecule' (ODM), which has a known biological target - eg a drug molecule. It has been speculated that the organic molecule can 'lead' the metal into the cell and to a specific target. If the metal then binds directly to the cellular target, it could massively increase the potency of the drug (fig 8). The main difference between this strategy and the above work is that here the biological target of the molecule is known, making this strategy a more rational form of drug design. 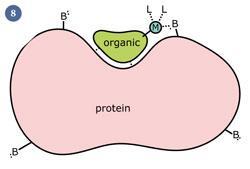 A recent trend in medicinal chemistry has been a trend away from high-throughput approaches to drug discovery (ie those where vast databases of molecules are screened against a biological target) towards structure-based drug discovery (ie those where drug design is based on specific structural information about a biological target) which recent research estimates can save around 50% of the cost associated with discovering a drug.10 However, a major limitation in the field is the lack of an agreed biological target. Currently, the two main theories are that ruthenium compounds target DNA or (as yet unknown) proteins. To date, a great deal of research has been directed at generating novel complexes for testing, with relatively little rational design or work aimed at elucidating the modes of action of these complexes.

In conclusion, ruthenium compounds have shown highly promising anticancer activity in cells, animals and humans. To date, two compounds are being evaluated in phase II clinical trials. However, a major limitation in ruthenium drug discovery is their unknown mode of action. This leads to three possible strategies for future ruthenium drug design.

Chemists could continue the current approach, without a clear biological target for their compounds, but instead generating large numbers of different compounds to screen against different targets and cell lines. This approach could include structure-activity relationships (SARs) in order to determine how altering different functional groups on the molecule affect its anticancer activity. This strategy has the advantage of simplicity, but it would be inefficient and a lack of information about the physiological target of the resultant complexes could complicate regulatory approval.

Alternatively, more research could be directed at eliciting the mode of action of existing ruthenium compounds. Then, armed with detailed information about how ruthenium behaves in biological media - what it prefers to bind to, how it gets into cells etc - chemists can begin to design ruthenium drugs which have a high affinity for cancer targets, with far less severe side effects. This strategy could be highly advantageous if a target can be identified.

The final and most recent approach to ruthenium drug design would be the generation of further ruthenium-ODM complexes, in which an organic molecule binds to the active site of an enzyme and the attached ruthenium ion binds to a nearby residue of the same protein. The high-energy interaction set up between the metal and the target offers medicinal chemists a high-energy mode of bonding which isn't available to 'traditional' organic medicines. The advantage to this approach is that the compound has a known (or, at least, desired) biological target against which enzymological studies can be performed - such as enzyme inhibition studies and protein crystallography.

Of course, in reality, it is likely that all three of these approaches will be followed to a greater or lesser degree, as more and more chemists enter the newly emerging field of ruthenium anticancer drugs. The continued progress of ruthenium compounds in clinical trials, and the frequent and exciting reports of new ruthenium-containing drug candidates in the literature point towards a future where medicinal chemists look beyond the classical 'biological' elements of carbon, hydrogen, nitrogen and oxygen, and begin to consider the potential of the less explored regions of the periodic table to generate powerful and effective drugs.