Salting away our spare gas

Redundant rock salt caverns around the world have been used for over 50 years to store various hydrocarbon gases. The first such UK facility for natural gas, at Hornsea (Yorkshire), has operated since 1979. By 2006, salt cavern storage was also operating at two Cheshire brinefields and on Teesside. Currently, similar schemes are underway, or planned, at several other locations around the UK (fig 1). 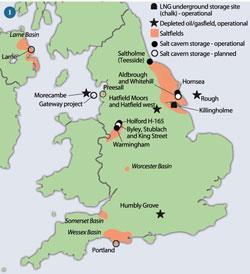 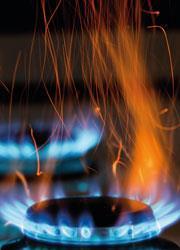 The objective is to provide a buffer between fluctuating supply and demand.1 Historically, output from UK North Sea gas fields, was controlled to match varying (eg seasonal) demands. Nowadays, an increasing proportion of our gas (>60% in 2011) is imported:

Strategic reserves are needed to minimise the effects of any temporary reduction or interruption of supplies, and cope with peaks in demand.

To avoid shortfalls during high winter demand, we need reserves equivalent to 20% of our 103 billion m3 annual consumption.2 Current gas storage capacity is about 4% - only two weeks supply, compared with four months in Germany (fig 2).3 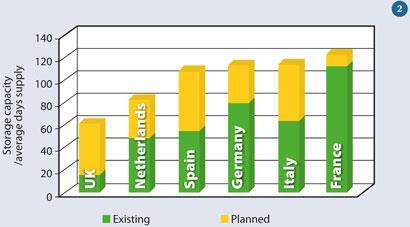 Balancing gas supply and demand will be made more difficult by commitments to increase our use of renewable energy sources. Wind farms and solar cells are weather-dependent, and therefore unreliable, so back-up methods are essential. Gas-fired power stations are ideal, since they can be powered up and run down to match demand, much more quickly than conventional or nuclear stations.

Fig 3 shows the variations in demand and in contributions from different energy sources across a year. In 2009 the proportion from each source varied little from day to day. In contrast, the prediction for 2025, when 'green' wind has largely replaced 'dirty' coal, highlights the intermittent nature of wind energy, and consequent wide variations in the demand for gas to fill the energy gap. This explains the need for a flexible supply system, with high storage capacity, capable of providing large volumes of gas at short notice when needed.

Why use salt caverns?

The intuitive answer, 'because they're there', is clearly not the only reason, otherwise limestone caverns and disused mines would be similarly used. For most facilities currently being developed, the salt caverns were  not  already there - they are being newly created specifically for the purpose (Table 1). 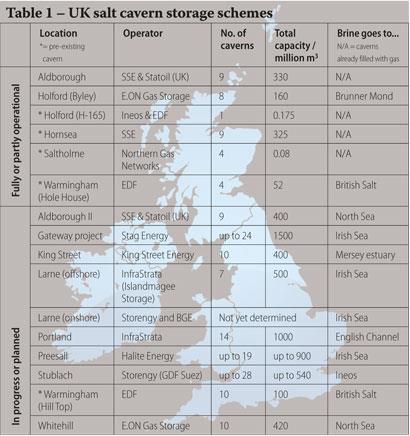 The real reason is geological. Rock salt is impermeable to gas, so the caverns are gas-tight. So too are the cap-rocks over the original gas fields. Therefore, depleted natural gas reservoirs can be refilled by pumping gas back into them. Indeed, the great majority of UK gas storage capacity is in the Rough field, off the Yorkshire coast, capable of holding 3.3t billion m3. However, forcing gas back into sandstone pores, and releasing it again when needed, is much slower than pumping it in and out of hollow rock salt caverns.

Geography is also important. The caverns are much closer than the gas fields to centres of population where most of the gas will be used. Cheshire's salt beds lie within 30 miles of Manchester and Merseyside, and 50 miles of the West Yorkshire and West Midlands conurbations. 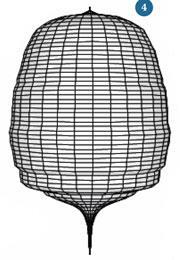 Solution mining originally supplied brine for the chlor-alkali industry, and for evaporation into table salt. When

a resulting cavity reached the maximum safe size it was abandoned and a new brine well started. To avoid further dissolution, and subsequent collapse, disused caverns were left full of saturated brine. In theory, using these abandoned caverns for gas storage simply involves pumping in the gas, displacing the brine.

In practice, recommissioning is more complex, requiring stringent tests to ensure that both the cavern and borehole are suitable.4

Not all redundant caverns prove suitable, so some companies have decided to create new ones. The solution mining is controlled from the start to ensure that the resulting caverns will have the required characteristics.5 Their location and size must be approved beforehand by the Health and Safety Executive, and the same stringent tests are applied to new caverns as to old ones.

To create a cavern, a borehole is drilled down into the rock salt. A wellhead pumps water down, and the resulting brine back up, through concentric pipes. Over several months, a cylindrical cavern forms from the base upwards. By controlling the position of the inlet pipe, the cavern is contoured to the desired shape.6 A domed ceiling and inverted cone base minimise stresses in the surrounding salt, and forces on the cavern.

Cavern size depends on the thickness of the rock salt beds; about 800 000 m3 is typical. Ask your students to calculate the minimum volume of water required to dissolve this volume of rock salt. (Assume rock salt is pure NaCl, and the resulting brine is saturated.) The answer is equivalent to about 2000 Olympic sized swimming pools.

When insufficient fresh water is available to create multiple new caverns, sea water can be used instead, since it is nowhere near saturated with salt.

Although it would seem sensible to use the brine in local salt-based industries, these already have their own supplies, so there may be no commercial outlet for the new brine. The twin problems of water shortage and unwanted brine are resolved by building a double pipeline, importing seawater to dissolve out caverns, and exporting brine back into the sea.

In Cheshire, brine from cavern creation at Stublach is taken by chemical company Ineos, while that from recommissioning EDF's Warmingham caverns is crystallised by British Salt. Meanwhile, the nearby King Street Energy project uses a specially built pipeline to and from the Mersey estuary. Using a tidal estuary ensures that the brine is quickly diluted and dispersed.

To become operational, new gas storage caverns must be linked to the National Transmission System (NTS), a 7400 km network of high pressure gas pipelines. The NTS operates at about 1000 psi (≈70 bar or 7 MPa). Cavern pressures vary as gas flows in and out. Once connected to the NTS, gas may be either pumped or free flowed in and out of the caverns, depending on the relative pipeline and cavern pressures at the time.

The number of caverns and their sizes vary between different projects (Table 1). The capacity (maximum volume of gas at normal pressure) is much higher than the cavern volume, since the gas is stored under pressure. Storage pressure depends on cavern depth, but at 7 MPa, a typical 800 000 m3 cavern can hold about 56 million m3 of gas. Put in perspective, five such caverns are needed to store enough gas to supply the UK for just one day of average usage.

The advantage of salt caverns over depleted gas fields, which can hold enormously greater volumes, is that gas can be both injected and recovered from caverns much more rapidly. Gas can be quickly released into the NTS grid at times of high demand, and the caverns topped up again when demand
is low.

As an analogy, a fridge provides quick access to daily food. A freezer is for longer term storage. People buy extra food when it's cheap, storing some in the fridge and the surplus in the freezer, ready for when it's needed. However, it takes time for food to freeze properly - and to defrost again before it can be used.

One disadvantage is that only around 70% of the stored gas is available for withdrawal, since some, known as 'cushion gas' must remain in the salt cavern to maintain sufficient pressure to avoid the risk of collapse.

The halite is interspersed with marl (clay and silt) and other minerals. During solution mining these insoluble impurities collect in the sump (fig 5), reducing the final volume available for gas storage. 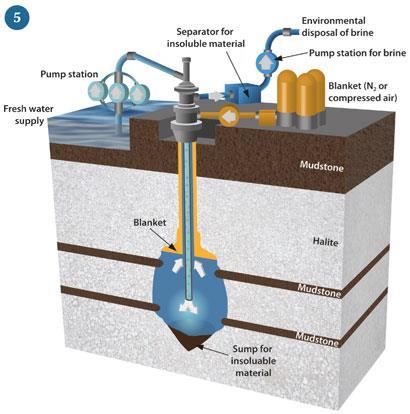 The pressure from 300 to 2500 m of mudstone above, causes the halite to deform. However, rather than fracturing, halite creeps or flows over geological time, sealing any fractures caused by earth movements in the past. So cavern walls are unlikely to contain cracks that would allow gas leakage. Creep also means the surrounding rock pressure slowly squeezes cavern walls inwards, reducing the volume by about 1% a year, depending on depth.

Flammable gas storage is an emotive topic for local authorities debating planning consent. Encourage your students to produce arguments for and against such a project, possibly holding a mock-enquiry.

Storing millions of cubic metres of gas deep underground is undeniably safer than using hundreds of gas holders on the surface. Although there have been a few serious incidents involving gas in salt caverns,8,9 these involved equipment failure or old caverns in inadequately tested strata. None has occurred in the UK, where projects are subject to strict Health & Safety Executive regulations and inspections.

The main environmental issues10 are:

Although storage caverns are out of sight below ground, equipment is needed on the surface. A rig is required to drill boreholes for new caverns, but not for the solution mining process. Wellheads, pumps/ compressors, gas drying and metering equipment will be permanent. Grouping wellheads together minimises both the space required for these items and environmental disruption. Once the caverns are operational, the remainder of the site can be returned to its previous use.

Mike Tingle is an educational consultant and freelance author