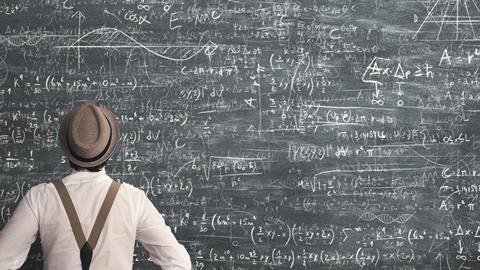 Take it easy on the equations. Let me explain …

Every year for the last ten years I have begun my introductory thermochemistry classes by asking students three questions.

I first ask: which substance would show a larger temperature increase if heated for a defined time: water or iron? Extracting answers from a large undergraduate first-year class is difficult, but even this question prompts a few shout-outs of ‘iron’.

Finally I ask: why does water have a much higher heat capacity than iron? I’ve never had a satisfactory answer without prompting further, and I teach some very bright students.

The third question is hard because it asks students to think about the same chemical phenomenon from yet another, less practiced, perspective. To fully understand chemical phenomena, students need to think about them from three perspectives, or levels, at the same time. These levels are known collectively as Johnstone’s triangle.1 Firstly, you can consider phenomena at the macroscopic level – using observations we can perceive through the senses, by smelling a gas, seeing a colour change or feeling a temperature change. The second level to consider is sub-microscopic – a description of chemical phenomena using atoms, molecules, ions. The third is symbolic – a representation of what is happening using the language of chemistry – such as chemical formulas, equations and mathematical representations.

When I ask my three standard questions, students know that the temperature of metal increases easily upon heating, whereas water requires much more heat to see a temperature change. They have observed this at the macroscopic level. My students are able to quantify this difference – they can calculate amounts of heat needed to increase the temperature of two substances using their respective heat capacities. They are explaining the macroscopic level using the symbolic level. But they aren’t able to explain the phenomenon in terms of the atoms and molecules involved. They aren’t able to say that, at the sub-microscopic level, metal atoms arranged in an orderly lattice allow efficient heat transfer through the substance. Water molecules are constantly moving, continuously changing their neighbours’ path, so heat flow through the substance is much less efficient.

Losing sight of the chemistry

As an expert, I am able to move between the apexes of Johnstone’s triangle with relative ease. But students need lots of guidance to explain how the different levels relate to each other. Johnstone himself said that it would be ‘psychological folly’ to try to teach all three levels at once. So, in physical chemistry, we tend to focus on the symbolic level. We get students to perform calculations that underpin chemical phenomena in thermodynamics, kinetics, equilibria and electrochemistry. These subjects have become increasingly mathematical, and the ability to solve complex equations is the key required skill. Questions in final school exams across the UK on chemical equilibrium, for example, consistently require students to calculate the equilibrium constant, or use it to calculate an equilibrium concentration.

However, those exam questions rarely probe a chemical understanding of what values like equilibrium constants mean. We rarely ask students to make the jump between a calculated value and an explanation of what that means in sub-microscopic terms. The current approach of focusing on the links between macroscopic and symbolic isn’t working if a student can complete a calculation without ever really understanding what it is that calculation represents. Somewhere along the way, we lost the chemistry.

The power of words

There is substantial research suggesting that instead we need to focus first on teaching students to connect the macroscopic observations with the sub-microscopic. We need to help them create verbal explanations and diagrams to explain what is happening at the molecular level. Once these connections are made, we can move on to teach them how to quantify these at the symbolic level.

But how can we achieve this in the classroom? The following examples, informed by the education research literature, provide some inspiration.

Students at all levels (and some practising scientists) find it difficult to distinguish between temperature and heat. They might see temperature as a measure of heat, and might agree with statements such as ‘a cup of coffee and the room around it, both at the same temperature, have the same heat’ or ‘temperature is something that passes from a hot substance to a cold substance’.

Present students with a scenario: you place a cup of hot coffee on your desk. You leave the room and come back in 10 minutes. To help students begin teasing out the differences between temperature and heat, ask them:

Probe this misunderstanding further with a second example: You fill two identical containers with equal amounts of water and alcohol at 20°C. You heat them with identical burners. After two minutes, the alcohol reaches 30°C, but the water only reaches this temperature after four minutes. Ask students:

A very common incorrect answer to this question, even after students are reminded about the time difference, is to say that both containers have received the same amount of heat. Reasons suggested are the flame is the same in both cases, and that both liquids are at the same temperature.

Discussing answers with students will incorporate some specific language to describe the concepts involved: heat is a transfer of energy; it is caused by a temperature difference; it flows in the direction from hot to cold (and not in reverse – the coffee cup will not be warmed by the room); the process of transfer is by means of a hot body in contact with a cold one (hot coffee molecules contact colder air molecules).

All of these concepts underpin the simple calorimetry formula q = m × Cs × ΔT. But it is important to first tease out qualitatively what students understand about calorimetry before setting them to the task of calculating amounts of heat transferred or changes in temperature.2

There are several common misunderstandings about enthalpy, including that breaking bonds releases energy (enthalpy) and that only exothermic reactions are spontaneous.

Try presenting students with a reaction and asking them to discuss it in terms of endothermic or exothermic processes to help them describe and understand what’s happening at a sub-microscopic level. For example, a reaction between HCl and NaOH results in a temperature increase of the solution:

Research shows that students’ progression in understanding follows the same sequence as these questions. The prompts align with three levels of complexity observed in student explanations.3 The first question in the sequence relates to the previous example, teasing out the differences between temperature and heat (expressed as enthalpy). But, here, we are considering changes within a reaction beaker. So, the second question probes the fact that, instead of hot coffee transferring heat to the air molecules in the room, the source of heat is from the chemical reactions of the molecules. The energy supplied by making new bonds to form the products means that energy is transferred to the solution, resulting in an increase in temperature. Finally, as heat is released in the overall reaction, the system has less energy than it did at the start, meaning the products are lower in energy than the reactants.

What happens in dissolution?

Students have a range of misconceptions about what happens in dissolution, including that the salts react with water to form displacement products (eg Mg(OH)2). They confuse the endothermic and exothermic components of the overall process. The heat source is also unclear as no overall chemical reaction is occurring.4

We can only identify these misconceptions if we ask students to describe and discuss what processes are occurring at a particulate level. Once done, when it comes to interpreting the mathematical analysis, students have a richer chemical understanding of what is occurring.