When teachers and researchers collaborate

A school teacher answered an open call to collaborate from a university researcher. Their partnership benefited them both and in unexpected ways.

Collaboration between schools and universities helps educational research outcomes impact practical day-to-day issues in schools. From both sides, researchers and practitioners are breaking down barriers to accessing education research. More teachers are setting up journal clubs and research groups in their own schools. Meanwhile, many researchers are sending their work across the divide with more tweets, blogs, talks and practitioner articles that leave the academic jargon behind. 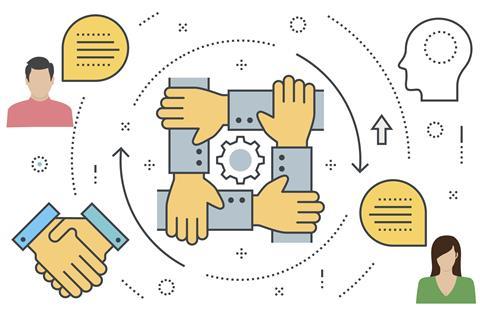 Michael Seery, a researcher in chemistry education at the University of Edinburgh, is an avid blogger. His interests in technology-enhanced education and laboratory teaching led him to research and develop digital badges for acknowledging skills. Analogous to Guide or Scout badges that represent proficiency at a certain life skill, digital badges micro-accredit competencies, but their digital form allows rich information, or metadata, about skills gained. They give a picture of a student’s achievements to compliment formal qualifications.

‘I thought this would be a useful thing for school teachers, especially in the context of changes to practical assessment at A-level,’ says Michael. ‘At the end of an article about it I put a comment inviting teachers to contact me.’

Naomi Hennah, a teacher at Northampton School for Boys, had been following Michael’s tweets and blog for a while. For Naomi, the timing of Michael’s invitation was serendipitous: ‘Here was a mechanism to develop, recognise and reward lab skills, the very skills I wanted to develop in my learners, so I responded.’ 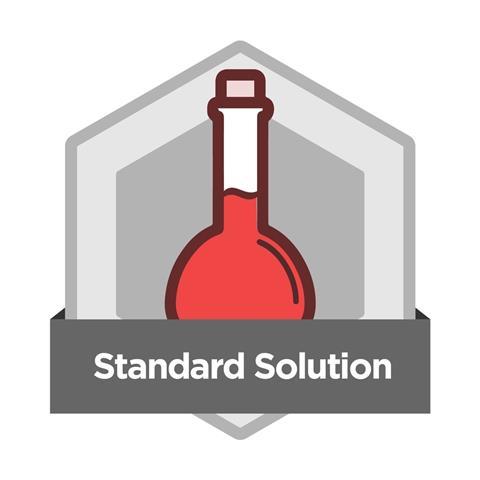 One of Michael’s badges, which indicates the ability to make up standard solutions

At the start, Michael expected the collaboration to be pretty simple. ‘I had a suite of materials that with a bit of tweaking could be rolled out in school environments. Naomi would let me know how they went in a general sense. And for my part, I would be able to give a kind of hand waving statement in talks about my digital badge project to the effect that they had been used in schools as well.’ But Michael was about to find out the collaboration would have even better, broader impacts for his work.

‘It was clear from the outset that Naomi was an avid reader and very deep thinker’, says Michael. ‘She began to plan out in much more detail how this was going to operate in the classroom guided by her interest – and now mine too – in oracy.’

From her decade of teaching, Naomi appreciated how nuance of language is as problematic to learners as the chemical concepts and had read widely around the topic. She came across a scheme for primary school children, ’Talk for Writing’ by Pie Corbett, which inspired her to investigate the link between practicals and learning. ‘The scheme uses actions to help children recall and retell a story, which prompted me to consider whether or not hands-on laboratory skills could be used as memory hooks for learners in chemistry. Is it possible that placing greater emphasis on the laboratory procedure could positively impact on recall and attainment?’

Naomi presented Michael with an ambitious vision of how digital badges could be used to continuously develop practical skills and scientific language fluency from 5–18 year olds, including their use to reduce cognitive load and enhance learning. Then she got to work trialling it in the classroom.

Michael says he certainly got more way out of it than he’d envisaged: ‘instead of getting a thumbs up and “That’s great thanks!” back from the trial, I got some really excellent evaluation, commentary and a lot of thoughts about how the process ran in schools.’

And the collaboration didn’t stop there. ‘Michael has supported and encouraged me to continue to bridging the classroom–university divide’ says Naomi. The pair co-authored a research article and Naomi presented a poster at the MICER 2017 conference.

Naomi seems to have caught the research bug. She’s now used the digital badge procedure they developed with students undertaking the new coursework-free GCSEs and also with 7–11 year olds in an afterschool club. And she plans to write up and publish the further work. ‘Thanks to Michael I feel I have a voice and something worth listening to.’

‘There really is so much education research that gets wasted not being accessible to teachers’ says Naomi. ‘Researchers, like Michael, that make links between the two practices help teachers read and translate it into their work.’

The collaboration hasn’t only had a big impact on Naomi’s work. It has opened up new, unexpected research directions for Michael. Their findings from trials in school classrooms may even influence higher education teaching as well.

‘It was clear from reading the reports of the trials and the things that happened in the school classroom that we could learn a lot in terms of how we teach and use these materials in university,’ says Michael. ‘In our roll-out this year, we are emphasising the dialogue more, Socratic prompts, getting students to explain what they are doing and why they are doing it. I’ve learned a lot about the practice of teaching from observing school practice at a distance, and this is having a direct impact on the educational approaches we use at university.’

‘So what started out as a simple collaboration has influenced the direction of my research and the practice of my teaching. It’s safe to say that I didn’t expect that at the start, but now that we’ve made these connections, we have a lot more plans underway.’

Michael stresses collaborating doesn’t only help classroom practice. It can really help researchers with their future work. ‘I’d really encourage academics completing education work for their part to connect with teachers. I’ve learned an awful lot as a result of it.’

Michael is a reader in chemistry education at the University of Edinburgh. Naomi is a chemistry teacher and is also studying for a master’s in education

Updated August 2018: Find out the results of Naomi’s research with GCSE students in her paper published in Chemistry Education Research and Practice.