The Chemistry Olympiad is the leading chemistry competition for students in seconday education across the UK. Here's how it works.

The selection process for the members of the UK team that enter the International Chemistry Olympiad (IChO) is managed by the RSC Olympiad working group and is supported by the RSC and INEOS. Through this process the UK's four most able sixth form chemistry students are identified and trained further to represent the country at the IChO final. 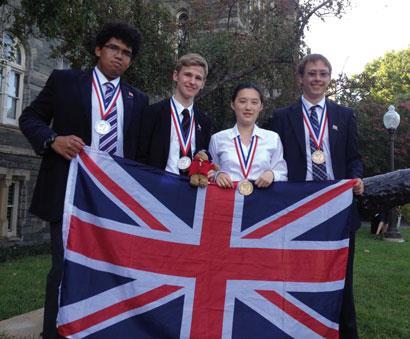 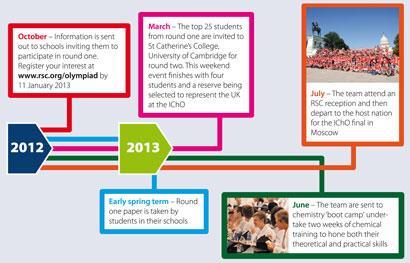 The selection process timeline for 2013. To see a larger version of this figure, download the pdf at the end of this article.

The competition also aims to promote chemistry and its relevance to everyday life to school students and encourage their passion for the subject. The RSC is keen to encourage as many students to take part in round one as possible.

Round one is open to all sixth form students and in 2012 over 3600 entries from 409 different schools were received. The RSC awards bronze, silver and gold certificates to the highest performing candidates in round one and in addition the top 50 candidates also receive a book token. An INEOS prize is also awarded to the best performing new state school: the student achieving the highest mark, from an eligible school, wins £1000 for their school chemistry department.

How does it all begin?

In round one students take part in a challenging, yet fun, test of their chemical knowledge. The questions stretch students well beyond the constraints of their normal school examinations by exploring familiar chemical ideas in unfamiliar contexts.

This round comprises a two hour paper which the students take in their own schools. Schools are able to enter as many candidates as they like. The competition is open to chemistry students aged 16-18. The paper is most likely to be accessible to older students, however its aim is to test logic and deductive reasoning rather than knowledge and often several younger students will outperform their more senior counterparts. The exam scripts for round one are marked by the host school and marks are submitted to the RSC for moderation with the top scoring candidates being invited to attend round two.

Round one contains problems that include ideas and tasks that highlight the application of chemistry to real world scenarios. The RSC has received lots of positive feedback from schools who have subsequently used round one questions to stimulate enthusiasm for the subject and to promote debate. These problems can also stretch keen and talented students beyond the constraints of their syllabus and many schools use the material as a valuable resource to enhance teaching and learning.

The RSC has published all previous Olympiad round one papers and mark schemes and schools are strongly encouraged to expose their students to these prior to sitting the round one paper. In addition, schools can contact the RSC and request a support booklet which further explains the rationale behind several of the past paper problems.

Recent examples of round one problems include: the chemistry behind the salting of roads in the winter; the synthesis of the antihistamine fexofenadine; the use of synchrotron radiation based x-ray fluorescence elemental mapping to discover a hidden van Gogh painting; the world's first 'nanocar', and the use of mass spectrometry to determine polypeptides in cone snails.

A round one problem from 2011 discussed the organic synthesis of phenobarbital, a barbiturate that has been used as an anti-convulsive for many years. This organic synthesis problem is indicative of the format and style of the round one organic problems, with students having little or no experience of the reactions described. As a consequence, students might initially be frustrated by the lack of structures proposed, or perplexed by the complexity of the final structure. However, many candidates are able to work logically through these problems and use clues in the question to solve the problem. These clues include the chemical formulae of intermediates and the skeletal formulae of the product. More importantly, successful candidates are able to appreciate the back bone of the structure found in phenobarbital as a precursor and are able to carry this logic throughout each stage of the synthesis.

A round one problem

This question is about the synthesis of phenobarbita

Barbiturates are derivatives of barbituric acid which act as central nervous system depressants. Barbiturates are used in the treatment of seizure disorders. One example of a barbiturate that has been used as an anti-convulsive for many years is phenobarbital.

Phenobarbital can be synthesised from two compounds, A and G:

Compound A can be found as a metabolite in human urine.

Use the information below and in the introduction above to determine the molecular formula of compound A. Show clearly the important steps in your working.

Compound G can be synthesised as follows: 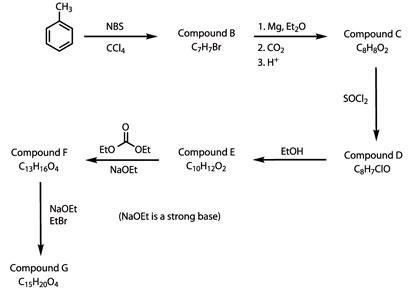 [Note: NBS is N-bromosuccinimide - a source of bromine radicals and Et = ethyl] 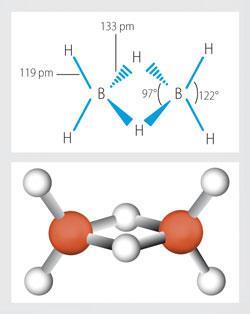 Boron hydrides and other boron compounds

Boron hydride chemistry was first developed by Alfred Stock (1876-1946). More than 20 neutral molecular boron hydrides with the general formula BxHy have been characterised. The simplest boron hydride is B2H6, diborane.

Using the data below derive the molecular formulae for two other members of this series of boron hydrides, A and B.

After moderation of the round one scripts by the RSC's Olympiad working group, the top 25 students are invited to round two, which is a weekend event at the University of Cambridge. Before this, students are given additional reading, textbooks and preparatory problems to work through in order to prepare. The material varies each year as the host nation for the international final can select certain 'advanced topics' on which to ask questions.

Round two comprises a three hour theoretical paper and introduces the first practical assessment into the selection process and mimics the setup of the IChO final. Both the practical and theory papers are marked on the Saturday evening, which enables the selection of the UK team by the end of the weekend. This year, the UK team consisted of Callum Bungey (Westminster School), Walter K?hm (Cambridge Centre for Sixth Form Studies), Ella Mi (The Kings School, Peterborough) and Thomas Spence (Winchester College).

Kinetics, isotope effect and mechanism of iodination of acetone

Discoveries about the mechanisms of chemical reactions underlie advances in catalysis and synthesis. One of the most powerful tools for probing reaction mechanisms is the study of kinetics, because the way in which reaction rates vary with reaction conditions follows directly from the mechanism of reaction. A second powerful tool is the study of isotopically substituted molecules. While isotopes impart similar reactivity, there are slight differences in reaction rates as a function of nuclear mass.

In this task you will use both kinetics and isotope effects to provide information about the iodination of acetone in acidic aqueous solution.

The reaction takes place with a rate law:

where the rate constant k and the integer reaction orders m, n, and p are for you to determine. You will also compare the reactivity of acetone with that of acetone-d6, where the six atoms of protium (1H) have been replaced by deuterium (2H or D), to determine the isotope effect (kH/kD) of the reaction. From these data you will make inferences about the mechanism of this reaction.

In preparation for the final, the host country releases preparatory problems which cover both theoretical questions and practical tasks. This allows the participants to train and gain further experience of the standard of the problems that they will be expected to answer in the actual competition. This preparation is highly demanding. It requires a high level of understanding and interest in chemistry, coupled with an outstanding ability to relate chemical subjects to one another as well as to the practical world.

The UK team works through these problems with members of the Olympiad working group during a two week training camp which is held in Cambridge during the summer holidays. After the training session, the team heads off to the final and is accompanied by two mentors and up to two scientific observers, all of whom are members of the working group.

The final is a rigorous process with candidates having to complete both a five hour theory exam and a five hour practical paper. The problems at the final cover material that you would expect to find in the first or second year of a university undergraduate course.

The theoretical paper covers a wide range of material including ideas found within organic, inorganic and physical chemistry. There are also questions on biochemistry. For example, the 2012 paper asked candidates to determine the absolute stereochemistry of an enzyme catalysed Diels Alder reaction.

The practical exam is of a similar standard, with students carrying out experiments that they will have not encountered at school. It normally involves a quantitative exercise, a synthesis and/or qualitative exercise. The students are given several tasks to run simultaneously, which tests their time keeping and organisation, as well as their ability to perform accurate experiments and experimental calculations.

The 2012 final gave candidates a unique opportunity to work with isotopes during a kinetic investigation. Students had to devise and carry out an experiment to investigate the kinetics of the iodination of propanone. They repeated the experiment with deuterated propanone which allowed them to find out the kinetic isotope effect for the reaction and so validate a proposed mechanism.

Although aim of the competition is to stretch and challenge young chemists, it also offers the candidates a great opportunity to engage with other liked minded young people from around the world. Outside the two examination days, the student programme is packed with days out allowing the competitors to explore the culture, history and experiences of the host country. This year visits included the national space centre, the national aquarium, the Kings Dominion Theme park and a disco in the French Embassy.

After completing both exams, the competition concluded with a medal ceremony and grand banquet. In general, the top 10% of candidates obtain a gold medal, 20% a silver and 30% a bronze medal. The grade boundaries for the medals are high, with candidates needing to get around 90% for gold, 80% for silver and 65% for bronze.

The 2012 UK team brought home two silver and two bronze medals adding to the success of the country's teams from previous years.

David Gamblin is the head of chemistry at the Cheltenham Ladies' College. He attended the 2012 International Chemistry Olympiad final as a mentor for the UK team.

The RSC and members of the working group are especially grateful to Peter Wothers, teaching fellow at the University of Cambridge and chair of the International Olympiad steering committee, for his support and guidance and for securing lab facilities for round two and the training weeks.