What does the word chemical mean to you?

Chemists frequently complain their subject is misunderstood by the public, citing chemophobia as a key reason. Chemophobia has a variety of definitions, from an anxiety about chemistry, either in a learning environment or more generally, to an irrational fear of chemicals.1 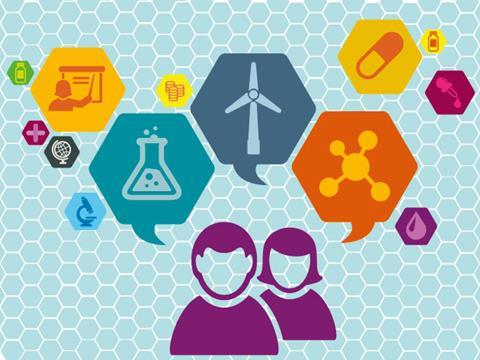 In 2015, the Royal Society of Chemistry undertook a survey to gauge public attitudes in the UK towards chemistry.2 Through a variety of methods, more than 2000 people over the age of 16 were surveyed on chemistry, chemists and chemicals. Members of the RSC were also asked to contribute.

The survey revealed that the public in general was somewhat ambivalent to chemistry and was unable to link chemistry with positive examples of its application. A neutral position was adopted by many surveyed, while others reached for stereotypes involving experiments being carried out to see what happens. More positively, the majority (72%) recognised the economic benefits of the outcomes of chemistry. Science more generally was recognised as economically beneficial by 76% of those surveyed. Chemistry was also felt to have a good overall effect on our health and welfare, coming only slightly below medicine, and equal to biology in perceived impact on our well-being.

Chemistry’s role in society has long been a selling point for the subject, particularly for A-level and university study. Fortunately, the public agreed that chemistry largely had a positive role to play in solving problems related to energy, food and water security, combating antimicrobial resistance and dealing with pollution.

Memories of chemistry at school had created a lasting impression on those surveyed, with teachers, school, laboratory, and lab equipment such as test tubes, elements and periodic tables being among the first things that came to mind. Words associated with pharmacy also appeared including medicine, drugs, tablets and pills. Deeper probing revealed a dependence on common stereotypes and memories with many related to high school experiences such as recollection of specific safety precautions or the smells of specific chemicals. There was also a sense that chemistry required concentration and focus, leading to the idea that it was a difficult subject, but only 24% of respondents said that school had put them off chemistry. The chemists that were surveyed expected to hear more negative stereotypes about chemistry being difficult or largely to do with blowing things up.

Moving beyond chemistry, the survey tackled attitudes towards chemists. Chemists were highly associated with pharmacists with many of the top jobs that a chemist would do being related to pharmaceuticals. Perhaps this is a particularly British problem, inspired by Boots the Chemist! This does highlight one of the key areas that can be addressed by effective campaigning by organisations such as the RSC, but also through education and outreach. 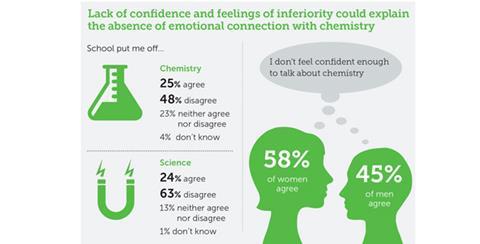 Chemists were regarded as approachable (88%) and having interesting jobs (64%), but it was unclear whether this was differentiated from pharmacists. Critically, the survey revealed distinct differences in how chemists thought the public would regard them compared with how the public did regard them. Of those surveyed, 88% agreed that chemists made a valuable contribution to society but only 12% of the chemists interviewed thought this would be the case. Perhaps chemists have some hidden anxieties about the role of their subject in society.

Where do our students fit into this picture? If we view our students as being very much at the interface between public and expert as chemists in training, it is clear they will be heavily influenced by the attitudes of both as they develop as a chemist. On one hand, they will experience chemistry in an academic setting, performing experiments, using laboratory chemicals, learning to assess risks and developing understanding of the principles underpinning the chemical nature of the world. On the other hand, they will go home to an environment where the perception of chemistry and chemicals may differ greatly. How can we help students reconcile these worldviews?

What is a chemical?

The final strand of the survey concerned attitudes towards chemicals, but first we must define what we, as chemists, mean by chemical.

Chemical is frequently used to define things belonging to the domain of chemistry such as chemical elements, chemical reactions and chemical properties, but is also used alone to refer to substances. With many students relying heavily on learned definitions for accurate terminology, the absence of a clear definition of chemical as a stand-alone term leads to confusion. Chemical, compound, substance and molecule may be used seemingly interchangeably by experts who differentiate the subtleties of context more effectively than students.

From the concept map (pictured), we can see that a chemical is most easily defined as a substance with constant composition and defined properties. We could argue that chemical and substance are interchangeable, however, substance is often used more broadly, such as to describe chocolate.3 We cannot include any description of the origin, or comparative toxicity of a substance in the definition, and should take care to avoid using the term chemical to selectively imply a more hazardous substance in the classroom. This leads naturally to a definition of chemical that indicates that everything is chemical. 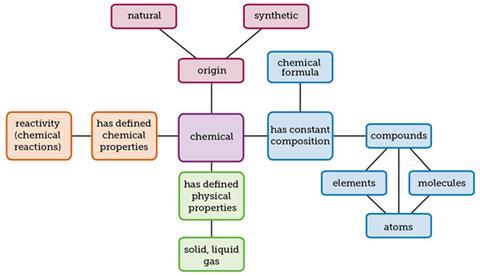 The use of chemical as synonymous with toxic, hazardous or poison in some contexts, particularly popular media, is common.4 This gives rise to a definition of chemical as something synthetic and toxic, and leads to a series of misconceptions such as the possibility of leading a chemical-free life. The RSC survey shows that many are able to hold these two main definitions of chemicals for use as the context requires, with 60% of the public agreeing that everything is made of chemicals. The majority of the public (67%) understood that chemicals could be found naturally or be synthetic, and that it was the quantity consumed that led to toxicity (70%). There was, however, a degree of uncertainty about the comparative safety of natural versus synthetic chemicals with 40% agreeing that natural chemicals were safer, 44% disagreeing, and the remainder indicating they didn’t know. Some participants had not associated the term chemical with substances from natural sources, while others felt that by-products associated with synthesis were a problem, making natural chemicals better.

A key issue for the public was how to evaluate the risk associated with chemicals in everyday contexts, particularly how to handle information presented in media coverage of issues and become well informed about the matter.

While the survey revealed there were concerns about chemicals, it did not seem to influence perceptions of chemistry or chemists. Over half of a small group of respondents who stated that ‘all chemicals are dangerous and harmful’ agreed the benefits of chemistry outweigh the harmful effects. One explanation was that chemists themselves were not viewed responsible for the decision-making processes that lead to a chemical being used in a harmful way. We might well disagree with that as chemists, knowing the professional requirements to ensure our work is carried out in a responsible and safe manner.

What’s in a name?

If it is important to have a clear definition of chemical, it is also important to be clear and consistent in the words we use in teaching lessons to name chemicals.Consider the difference between acetic acid, ethanoic acid and vinegar. A student who starts out understanding vinegar to be non-hazardous may extrapolate that glacial ethanoic acid must also be non-hazardous because it is the same stuff.

In preliminary work, we have found the name we give to a chemical influences our perceptions of the origin (natural, synthetic) and safety (safe/unsafe) of the chemical. For example, when asked to rate water and dihydrogen monoxide as known or unknown, safe or unsafe, dihydrogen monoxide was perceived to be generally unsafe by those who didn’t know what it was, and less safe than water by those who did claim to know what it was. Conversely, everyone knew what water was and rated it as safe or neutral. Similarly conflicting results were found when undergraduate students were asked to rate different names for aspirin, nicotine and alcohol. Where the common name is associated with health implications that are widely reported, the safety of the chemical is less definite. Where the chemical name is unfamiliar, the perception of the origin of the substance is more likely to be synthetic and it is less likely to be perceived as safe.

If the names we give to chemicals can impact people’s perceptions of their safety, we must be cautious about our use of terms in the laboratory. It is known that the term salt can cause some confusion between table salt and products of the reaction between acids and alkalis, but what if the term salt also equates to safe because we can eat one type? What if the use of a common name, still widespread practice in university labs for many chemicals, creates a false sense of safety? Further work is needed to investigate these findings more deeply.

Overall, we must take care to define and use terminology clearly and carefully. In particular, a clear definition of chemical is required and we must use the term consistently. We must also take care with the names we give to specific chemicals and consider that more familiar, less ‘technical’ names may give the idea that they are safer than those with long systematic names.

A generally positive attitude towards chemists and chemistry is a very hopeful position for teachers at all levels. While we have some work to do to clarify the distinction between chemist and pharmacist, our students are likely to be received positively when making decisions about further study or careers in chemistry.

Katherine Haxton is a senior lecturer in chemistry at Keele University, UK