A game plan for effective conflict management in your department

In the first week as a head of science at a secondary school, I made a misjudged joke which was completely misunderstood and badly received. Even though I immediately apologised, I found myself in conflict with the recipient of the joke for the next five years. The recipient refused to cooperate with me (and therefore the rest of the department). To make matters worse, when genuine performance issues arose, the conflict was cited as one of the reasons for the issues, so it was impossible to move forwards.

Conflict can be destructive, particularly if it’s left to fester. It’s also inevitable – people will always disagree. So what can a head of department do when conflict arises?

It’s important to recognise that there are two forms of conflict: cognitive conflict and affective conflict.

Cognitive conflict stems from intellectual disagreement. This is what arises when, for example, teachers disagree about the best GCSE specification to teach or the details of a marking policy.

Affective conflict is more personal. It’s more emotional. It arises when people feel their values are being ignored. For example, a teacher could feel undermined by the actions of another or perhaps left out of a key decision-making process.

Recognising that conflict is not always destructive is the first step in the process. A disagreement can stir up new ideas, if dealt with carefully. Conflict is often a driver for change and can increase the rate of progress in a department.

Careful conflict management will allow your team members to have their say and, in doing so, reveal their true values. Often, it also helps you to catch issues before they spiral out of control. The worst-case scenario would be regressing from an impersonal cognitive conflict to an affective conflict, leading to difficulties with people working together.

The most futile way of dealing with conflict is often the default for those involved: they want their leader to stamp their mark by prescribing what must be done. This overly assertive, coercive form of management is better suited to discipline issues. If conflict arises from bullying or deliberate flouting of rules, the transgression must be dealt with. However, if the conflict stems from disagreement, a cooperative form of resolution would be much more effective. This involves an open discussion between the disgruntled parties. Try to tease out the source of the conflict. Even an affective conflict can come from a cognitive starting point. For example, Rick feels he was undermined in front of Johnny but Ted says Rick didn’t understand what was actually going on in the background. 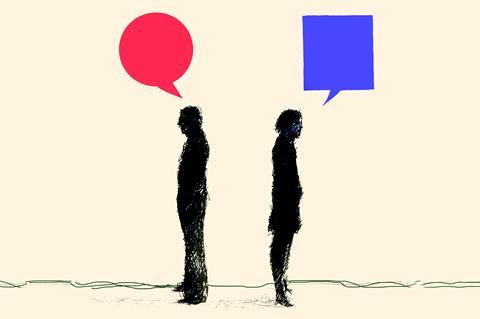 When colleagues disagree, give them each the space to share their feelings

Don’t take sides in conflict resolution, no matter how much you agree with one perspective. Maintain an open mind and always try to understand where both parties are coming from. Be genuinely curious about what drives each perspective. How did each person get to where they are? By following the trail back to the root of their belief, you’ll find that people will share more than they disagree. That’s the starting point of cooperation.

Often, when those involved in the conflict are together, they tend to only focus on their differences, so it may be useful to speak to each party separately. Give each person the space to share their feelings, and try to understand their different perspectives as they do. This approach will make it easier for you to find the points of intersection.

Ask open-ended questions to help the different parties bypass their immediate issues and focus on their values. What is it that they really want? Look out for underlying blockers. Is someone tied to an old textbook because it’s really good, or because they’re trying to avoid change?

Try to get the two parties to build on their common ground. Don’t do the work for them. If you come up with a compromise solution, it’s likely that both parties will feel unsatisfied and carry the baggage into the future. Also, you could become the subject of further conflict. Get them to work together to build something that works for both.

Catching conflict early and treating it as an opportunity to grow can help your team develop and prevent rot from setting in. Don’t shy away from dealing with it.