Don’t let conflict fester or escalate. Instead initiate peace talks with this advice

Almost everyone can think of a time when they were at loggerheads with someone. It’s particularly difficult if that person is at work. You can’t get away from them; potentially you see them every day. You have to keep working with that person, but you can’t stand them. 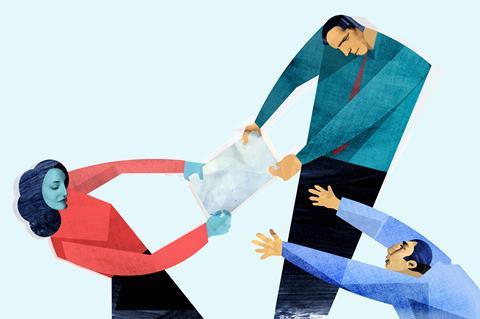 Conflict can arise from any number of different places. Misunderstandings turn into lack of respect, which turns into snubs. Disagreements turn into all-out battles. Being overlooked for promotion leads to Montague and Capulet proportion factions. Or, perhaps worse, failing to do the washing-up turns into being blacklisted and ignored in the social circles in school. Nothing is said, but it’s clear you’re now an outsider.

Dealing with conflict can be difficult, because you’re stuck in an emotional loop. It’s useful to recognise what cognitive behavioural therapists call the CBT triangle:

You have a thought: ‘My head of department gave me the task because he hates me.’ The thought causes a feeling: upset of fear. The feeling causes a behaviour, such as avoiding the head of department, or deliberately ignoring the task.

What happens next is the head of department is going to come demanding to know why the task hasn’t been fulfilled. That causes a new thought (‘He’s always out to get me’), which then starts a new cycle. Soon, the head of department (who initially gave you the job because you happened to be free that day, nothing more) starts to see you as a problem, and the conflict escalates.

Of course, if you think about conflicts that you’re currently involved in, you won’t recognise this. It’s always their fault. They started it. I’ve news for you.

No one ever does anything for a truly bad reason. There’s a positive intention behind every action. In the absolute worst cases, a person feels so bad about themselves they have to bully someone else (think Nelson in The Simpsons). However, most adults simply do things they think are the right thing and, due to lack of understanding, communication or emotional intelligence manage to get it wrong. Which starts the conflict.

The teacher who forgot to fill the biscuit tin didn’t do it because they hate you. They forgot because they were bogged down with work and have a sick husband who they were thinking about. The deputy head who gave you a poor grade for your lesson observation did so because they thought that it would be a way of encouraging you.

So, how do you deal with conflict when you’re in the middle of it?

Try to decide if the conflict was cognitive (based on a difference of opinion, eg which A-level specification to choose) or emotional (based on feelings).

For cognitive disagreements, try to find common ground. Sit down with the person and discuss what you both want and how you can try to find a compromise. Can you work together on this? Collaboration is far more positive than sitting in your classroom seething about injustice.

For emotional conflict, spot how it’s making you feel. Try to catch the thoughts. The best question you can ask yourself is: ‘Do I absolutely know if that’s true?’ Stop making assumptions. Try to see things from the other person’s point of view. Why are they acting in the way they are?

You can change only two things: your behaviour and your response to stimulus. You can’t change someone else. Which of these two is going to de-escalate the problem? You can guarantee the other person won’t make the first move – so if you want a happier life, you’re going to have to do it.

If all else fails, involve people up the chain. (Incidentally, if the conflict involves unacceptable behaviour such as sexual or physical assault, ignore this article and go straight to HR or your manager.) Involve your line manager or your union. Your local area may also have a mediation service that you could use. But be aware that external pressure sometimes makes things worse, particularly in emotional conflict. It’s almost impossible to tell people to be nice to each other. So instead of expecting your manager to sanction, ask them to start peace talks. Get them to help you find the common ground. Go in genuinely trying to make things better. You never know, you might find you turn conflict into collaboration and friendship.