What is a forensic scientist? 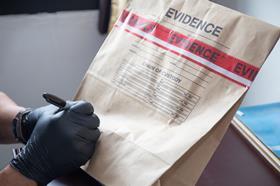 I think the two things I like most about this job would be one that it’s always different and the second thing is how involved it is. For every day you’re on a computer the next two days you’re in the lab hands-on. Just to try and keep you grounded and to remember why you’re doing things because the work we do has a purpose and I’m not saying other labs don’t, but these are people’s lives, people’s jobs, people’s families looking for an answer and you can’t ever forget that you’re here for a really important reason and the work you do counts.

I did a zoology degree, and worked in marine turtle conservation for a number of years. It got to the point where I had gone as far as I could with the role. Forensic science had been something I’d been interested in whilst in school but at the time you had to do pure chemistry, years in industry and then try and get in. That has now been shortened to a degree. I found a forensic science degree at Nottingham Trent and I also did a placement year where I was lucky enough to go to Poland. I joined the company after graduation.

To be a forensic scientist who goes to court ie. a reporting officer, you do need to have at least a bachelor science degree in chemistry if it’s chemistry you want to specialise in. If you want to be able to progress now you have to have a bachelor of science at least, and there are also many people with a masters or PhD within a chemical field. It’s a good idea to get some science lab experience whether that’s through a degree or taking a job in a smaller company just to get some analytical science experience to then move over to forensics.

Ideal skills and qualities for someone doing this job are that you need to be organised and flexible because your day can change at a moment’s notice, such as if there was a high-profile case. You need to be ready to juggle all your caseloads. I think you also have to be enthusiastic and motivated about what you do because the work can be hard and the work can be intense. Unless you’re willing to get involved and get out there then it would be a job that would drag you down a bit.

If you are interested in pursuing a career in this area, the Chartered Forensic Science Society can provide further useful information.