In this issue: significant figures 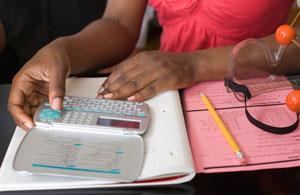 Warning: calculators give answers to greater precision than can be justified

When measuring a physical quantity in the laboratory it is good practice to estimate the uncertainty on the value obtained. When such quantities are combined in a calculation it is straightforward, though possibly tedious, to combine these uncertainties to give the overall uncertainty. Frequently though, we are often asked to perform calculations using values where the uncertainty is not specified. In these cases we need to use some standard rules for combining the quantities based on the precision with which they are expressed,1,2 to avoid giving values which imply a greater degree of precision than is justified. Before considering them, we need to understand what is meant by 'rounding'.

This is important because calculators typically give answers to greater precision than is justified by data. The basic rule is that if the digit we are discarding is above five we increase the previous digit by one, and if it is less than five we reduce the previous digit by one. Thus 4.857 rounds to 4.86 and 7.82 rounds to 7.8. An interesting situation arises when the digit to be discarded is five. Most people seem to have been taught to increase the previous digit by one. However, statistically it is better to round the previous digit to the nearest even number because then there will be an equal numbers of times when one rounds up or down in this case. This is known as Gaussian or, perhaps less fashionably, banker's rounding, and is designed to avoid an upward bias.3 In fact, this is only likely to be an issue when dealing with large amounts of data and the most important thing is to adopt a consistent approach. Whichever method of rounding is used, it is also important to consider only the digit being discarded.

Although this is the term commonly used, it is probably more meaningful to talk about significant digits. Any non-zero digit is considered to be significant. Zeros are considered to be significant if they are enclosed, as in 8.076, and may be if they appear at the end of a decimal number to the right of the decimal point, as in 76.900. When they appear at the end of an integral number it is more tricky to decide. Does 7600 represent an exact figure or is it 7643 rounded to the nearest hundred? In these cases we need to use any additional information we are given to decide. Leading zeros, as in 0.00876, are never significant because they simply indicate the magnitude of the number. Pure integers, such as those arising from stoichiometric ratios, are exact numbers and can be considered to have an infinite number of significant figures. Thus the number two which appears in the chemical equation:

When two physical quantities are added or subtracted, the answer should be given to the least number of decimal places in the original data. Thus 1.436 + 2.3 should be quoted as 3.7, since 2.3 is given to only one decimal place. Thus, if we want to combine the electrode potentials described by the equations:

in the Daniell cell, according to Ecell = ER - EL, we have:

since EL in the original data is only given to two decimal places.

In this case we quote the final answer to the least number of significant figures given in the original data. Thus 7.82/3.164 is given as 2.47 to three significant figures. If we want to calculate the entropy of vaporisation ΔvapS of water using the equation:

which should be given to three significant figures as indicated by the precision of Tb in the original data.

in which we have quoted two digits after the decimal point because this is the number of significant figures given in the original concentration.

In chemistry we are frequently dealing with equations which require us to combine these rules. Consider, for example, the calculation of heat capacity Cp using the equation:

which is given to the three significant figures implied by the value of b. We now have:

The final answer is given to two decimal places

For more complicated examples with more steps it may be worth calculating the final value and then revisiting individual steps to consider the appropriate number of figures to carry through at each stage. Often one quantity will be significantly less precise than the others which will make this a much easier process.

Rules for Rounding Off