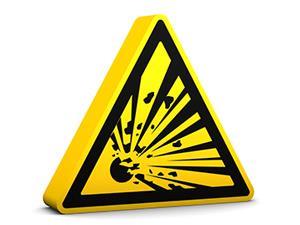 Two students at a US high school were seriously injured last week when a chemistry demonstration exploded.

This happened when a teacher at a high school in Manhattan, New York, was demonstrating the colours of flames produced by metal solutions in methanol. Two 10th grade (14–16 year old) students received severe burns when a ball of fire flew into the class.

Known as the ‘rainbow experiment’, the demonstration uses dishes of methanolic metal solutions as a visually stunning variation of the popular flame tests using a Bunsen burner. Some reports suggest that the accident was caused by a build-up of flammable methanol vapour, the possible cause of a similar accident in 2011 at a school in Milton Keynes, UK.

Steve Jones, director of CLEAPSS (the organisation that supports practical science and technology in schools and colleges), says that ‘any demonstration like this has an intrinsic risk arising from the formation of methanol vapour, so we would not recommend doing it in this way. CLEAPSS recommends the use of solid compounds in a Bunsen burner flame. If an alcohol is used the compound should first be dissolved in the alcohol (ethanol is much safer than methanol). This can then be burnt in a spirit burner, which prevents a build-up of vapour.’

It is recommended that teachers who wish to demonstrate the flame colours of metal salts could consider using trigger-operated spray bottles, as seen at the beginning of the hit US TV show Breaking Bad. In addition, hydrogen balloons offer an alternative method of demonstrating flame colours.