How microscale maximises and modernises learning

Former teacher, CLEAPSS adviser and winner of the RSC’s Excellence in secondary and further education prize, Bob Worley tells us why small scale yields big wins in the chemistry classroom

Much of the practical work done in school chemistry lessons is rooted in equipment and techniques used in the 19th century. Modern materials and microelectronics such as carbon fibre electrodes and inexpensive digital balances can revolutionise it. For example, carrying out a gravimetric titration with a balance and a fine tip transfer pipette, controlled with a screw on a clamp, is a great, quick introduction to titration for younger students. Such modern, small-scale approaches can also improve safety. 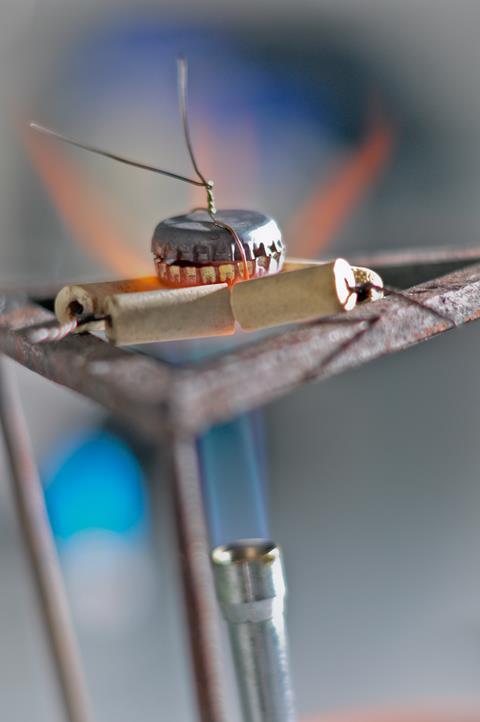 When I started work at CLEAPSS, there were many reports of dangerous whizz-bang activities resulting in disturbing incidents. Back in 1984, the reduction of copper oxide with dried hydrogen resulted in an explosion, students covered in acid and a teacher prosecuted, fined and out of a job.

I know safety isn’t a popular topic. I hear plenty of complaints along the lines of ‘it spoils all the fun’. But CLEAPSS’s, and SSERC’s, concerns for safety aren’t about stopping inspiring practical work in the classroom. Quite the opposite in fact. CLEAPSS and SSERC advisers not only need to know their stuff, they also need to be creative, inventive and imaginative – to enable practical work to continue.

In my view, small-scale approaches, such as replacing a crucible with bottle tops to find the empirical formula of magnesium oxide, are examples of finding those creative, inventive and imaginative solutions. And these microscale methods are even inferred in the HSE’s ‘boring’ COSHH regulations. Reducing concentrations, mass of used solid and volumes of liquids, and using a spirit burner to avoid overheating salts – they’re all great examples of how microscale reduces risks.

I first encountered microscale on what was then the ‘newfangled world wide web’. I found many Americans were scaling down to cut expenditure in organic chemistry. Bruce Matson, a professor at Creighton University, impressed me with his microscale gas chemistry, and John Bradley made a kit to be sent to schools with poor facilities in South Africa. This was also taken to many other countries by UNESCO. And in 1999, UK teachers received a free kit with the book Microscale chemistry from the RSC, but teachers were puzzled by how it worked and dismissed it.

Nominate someone for an Education award

Inspired by Bob Worley’s Excellence in secondary and further education prize? Want to nominate someone you know for an award? Visit the Prizes page  to find out more.

I remember reactions such as ‘you’re taking the fun out of chemistry’, ‘where are all the wow moments?’ and ‘this is not used in industry’. There were, however, teachers who were giving microscale a go. These teachers reported the new procedures were quicker, giving them time to explain and explore topics and concepts more fully, even in the (ever shortening) time allowed for practical work. And importantly, they said students liked these methods.

Technicians reported that, after initial preparations, microscale experiments were easier to set up and even easier to dismantle. And more recently, they’ve been telling CLEAPSS that, because of Greta Thunberg, even students are raising concerns about the use of chemicals in lessons.

Maximising the benefits of microscale

Microscale doesn’t simply have advantages of scale, economy and environment. It also has teaching advantages.

Teachers and academics report that carrying out a reaction in a puddle provides evidence to challenge misconceptions. Seeing solids dissolve, imagining diffusion of solvated ions and seeing the precipitate form, for example, is a great opportunity to discuss spectator ions. So impressive is this diffusing precipitate experiment, Bruce Mattson and I published a paper about it.

It’s no longer the case that microscale is being done on a small scale. It’s international and widespread. In 2021, the RSC’s Secondary and Further Education Group conference attracted presenters from China and Japan to Brazil and Mexico. We’ve all also used microscale in our everyday lives, for example testing for Covid-19 and monitoring blood sugar levels. And this year, David Paterson and I were proud to publish a book, Understanding chemistry microscale practical work, on the topic. I think we’re finally bringing school chemistry practical work into the 21st century.