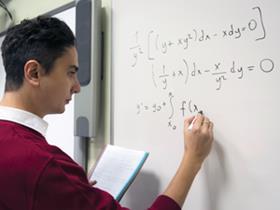 A study published today by Chemistry Education, Research and Practice suggests that poor performance in sections of A-level science papers is due to students failing to grasp the basics of mathematics.

Is mathematics to blame? concludes that deficiencies in basic mathematics skills has a knock on effect on chemical calculations and that action to resolve this should 'be in the mathematics classroom rather than the science classroom'. The author of the study, Fraser Scott from the University of Strathclyde, gave a cohort of 52 students a series of chemistry and maths questions. His analysis of the results led him to conclude that 'failure in the easier questions was due to a lack of understanding of basic mathematical operations such as division and multiplication, particularly when used in conjunction with fractions or ratios.'

This study is published only a few days after a report by SCORE (Science Community Representing Education) showed that A-levels in a range of STEM subjects fail to equip students with an appropriate level of maths skills. Graham Hutchings, Chair of SCORE, said, 'Mathematics enables students to understand and describe many scientific phenomena. Without learning some mathematical techniques, students are missing out on gaining a full understanding of the scientific ideas.'