In his wonderful autobiography, Uncle Tungsten, Oliver Sachs tells us that '... a small spectroscope became my constant companion, my instant analyser of the world'. So, where do you get one and what will you see with it on your spectral trail?

A different view of the world 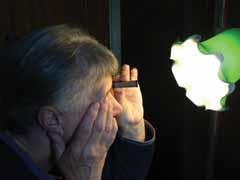 Amazing what you can see

A hand spectroscope is a pocket-sized tube with a prism or diffraction grating at one end - you point it at a light source and put the other end to your eye to observe the atomic emission spectrum. Popular in Nuffield A-level chemistry courses some years ago, you may find several unused hand spectroscopes in a drawer at school. You can buy traditional models for less than £20 and Middlesex University Teaching Resources sells one for under £3 which uses a CD (or DVD for better resolution) as a reflective diffraction grating, though it's quite fiddly to assemble and use.

Lighting up the town

Armed with your spectroscope, take a walk around the town. Perhaps there is a bright neon advertising sign - using your spectroscope you see a single red line (or possibly, with good resolution, multiple lines). Perhaps your town has sodium streetlights, which emit a warm orange glow. Point the spectroscope at them and you will see the strong yellow sodium line (or double line). Surprisingly, there is also a fainter red line, which shows the presence of neon. Neon is added to sodium lamps to help start the discharge. When initially switched on, these street lights often appear red before the sodium discharge starts. Visit London's Piccadilly Circus (or your local equivalent) and look at the other coloured advertising signs.

In fluorescent strip lights, atoms or molecules are ionised, emitting radiation mainly in the ultraviolet but this is then absorbed by a phosphor coating on the glass tube and re-emitted at visible wavelengths. Look at a strip light with your spectroscope and you will see a sharp line in the violet region and several broad bands in other regions. The low wattage bulb in my desk lamp has a sharp line in the violet and stronger, broader lines in the blue, green, orange and red - but not all low wattage bulbs are the same. And what about LEDs? To my surprise, my (white light) LED torch gives a continuous spectrum but coloured LEDs give discrete lines.

There are many other light sources to investigate, from computer and TV screens, through candles, to fireworks. With fireworks, it's much easier to point the spectroscope at static sources such as roman candles rather than trying to track rockets.

Your spectral walk may be best in the evening, when a variety of light sources are evident, including the moon. Never look, directly, at the sun with an optical instrument, but pointing the spectroscope at a slightly overcast sky may reveal the Fraunhofer lines - fine black lines imposed on a continuous spectrum. These are caused by absorption of radiation by atoms in the outer layers of the sun (and in the Earth's atmosphere).