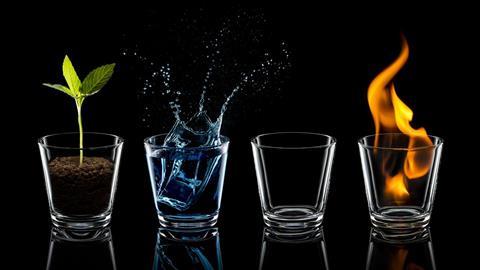 Air, earth, fire and water - sounds familiar doesn't it? Elementary, or archaic chemistry we might say.

What is a rare earth? Is it a special kind of soil? And what is rarefied air and is it different from a rare gas? Rare is well understood as meaning uncommon, though this is not its meaning in rare beef. Earth is used both for soil and for the whole planet. But at one time 'earth' was a common term for a metal oxide, the earthy substance produced when a metal is burnt. Soil is made up mainly of a mixture of oxides. The lanthanides occur as a mixture of oxides and they are relatively uncommon, so they came to be called the 'rare earths'. The rare gases (alas no longer noble) are still uncommon, found as trace gases in the atmosphere. Rarefied air, on the other hand, is common on the top of mountains and refers to air that has become rarer, ie thinner, with lower density and pressure. Thus rarefaction means to make rare, the process of reducing the pressure of a gas.

Nowadays air is used exclusively for the mixture of gases we breathe and live and move in, also known as the atmosphere. Originally in chemical history all gases were known as airs, and so we had carbonic acid air (CO2), mephitic air (also refers to CO2, or air which does not support life - from the Latin mephiticus, meaning poisonous or pestilential - or sometimes N2) etc. Another old name for air was spirit, meaning something insubstantial, and substances produced by distillation were known as spirits of., eg spirits of ammonia (a solution of ammonium carbonate in ammonia water and alcohol), spirits of salt (hydrochloric acid) etc. Today we refer to alcoholic beverages produced by distillation as spirits, keeping alive the alchemical nomenclature.

Early chemists referred to all colourless liquids as waters, rather than liquid or solution, as in aqua vitae (water of life - a concentrated aqueous solution of ethanol). Solutions were known as ammonia water, sugar water, lime water (a solution of Ca(OH)2, slaked lime, in water) etc. Fire-water was an old name for distilled spirit, and the rougher it was the more it burnt your throat.

To fire something meant to heat it strongly, not just to set fire to it. Heat-resistant materials often included fire in the name, such as fire-clay and firestone. Firedamp was a combustible gas found in coal mines. This explosive gas comprises mainly methane with other flammable gases, often mixed with air.

The early chemists used everyday language to describe what they saw, felt, smelt and tasted. They tried to classify materials by analogy with ordinary materials such as earths, airs, waters and fire, and also to distinguish them in the absence of adequate theories. Their faltering steps at chemical naming laid the foundations of today's more precise terms.