School chemistry has failed to cultivate the ability to detect 'bad science'.

The naked woman stands with her back turned. Streaming down her smooth, bronzed shoulders are rivulets of multicoloured slime. The headline in the advertisement is: 'Does your skin really need so many chemical ingredients?' The promise of the new shower products is that they are free of chemicals and contain only what the skin needs.

It is not unusual for chemicals to be presented in a poor light. Advertisers seem confident that even the readers of upmarket newspapers are susceptible to their messages. Years of compulsory science education have apparently done little to dispel the misconceptions. School chemistry has failed to cultivate the ability to detect 'bad science'. 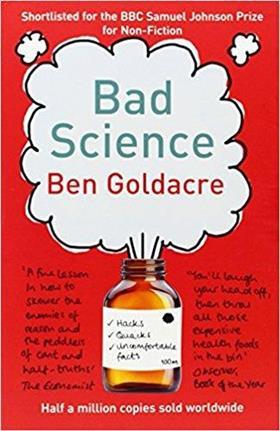 Help is at hand

Can we learn from Ben Goldacre, author of Bad science1 and Guardian columnist, whose mission is to protect the public from the stupid things that people write about science?

Ed Walsh, science adviser for Cornwall Learning, has set out to explore the possibilities by taking eight of the case studies from Bad science and turning them into lessons aimed at GCSE students.2 The approach is supported by detailed notes for teachers, however teachers would be advised to read the related chapters in the book to appreciate the intentions of the activities.

There is now more opportunity to feature lessons of this nature in school science because of the greater emphasis on teaching about the methods of science and the interplay of evidence and explanations under the heading How Science Works. Furthermore, the exams regulator, Ofqual, has insisted that future GCSE Science papers must test that students can apply their understanding in unfamiliar contexts, critically evaluate data and present reasoned arguments and explanations.

One of the Bad science lessons called Brown goo is based on the first chapter in Ben Goldacre's book in which he debunks the pseudoscientific invention of 'detox'. He discusses two techniques which have been promoted uncritically in the press: ear candling and detox footbaths. One of the suggested activities is based on a mock-up of a detox foot spa with plastic, rather than real, feet.

The observations show that the colour changes in the salty water are the result of electrolysis with iron electrodes and nothing to do with toxins being drawn out through skin by a bio-energetic field. This part of the lesson encourages students to examine critically the claims being made for such techniques and to see how the claims can be tested.

A second lesson in the series, called You are what you eat introduces some ways by which self-styled 'nutritionists' misinterpret research data as they mystify diet to foster the public's dependence on their advice.

In this activity, students can see how a failure to distinguish between an observation study and an intervention study led to a report in the Mirror newspaper advising readers to eat more olive oil as a protection against skin wrinkling caused by sunshine. In the lesson, students compare the newspaper article with a summary of the findings of a research project reported in the Journal of the American College of Nutrition.

One of the attractions of this lesson is that the original paper is available online so that teachers can show how scientific messages are translated from the research literature to the popular media.

A third lesson, called Can water remember?, is based on the chapter in Bad science about homeopathy. This chapter, and the lesson, address one of the most important issues in science: how do we know if an intervention works?

As Ben Goldacre explains, homeopathy provides the clearest teaching device for evidence-based medicine because homeopaths give out little sugar pills, and pills are the easiest thing to study systematically. The main activity in the lesson neatly models the dangers in interpreting data from small samples, the way that data can be misrepresented and how these problems can be addressed.

These are interesting lessons which will appeal particularly to teachers working with GCSE specifications that take a broad interpretation of the methods of science by including aspects of epidemiology as well as lab-based investigations.

Exceptionally, the activities make connections between school science and the popular literature of science. As chemistry teachers we should be exploring more ways of learning from the successful science books for general readers about how to get key messages across.