Nearly every day we spend money. In the UK we have not had gold coins (sovereigns) since 1914 and coins containing silver disappeared in 1947, but do we still have copper coins? 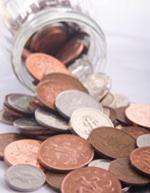 In order to operate satisfactorily in slot machines, etc, a particular denomination of coin must be of constant mass and constant diameter. The density of mild steel is 7.7 g cm-3, whereas pure copper is 8.92 g cm-3 and bronze is about 8.3 g cm-3, depending on the exact composition of the alloy. So to accommodate the change of material the volume of the one penny coin increased. As the coin is in effect a cylinder, to maintain a constant diameter of 20.32 mm the thickness of a copper-coated steel coin must increase. The actual increase was from 1.52 to 1.65 mm. If you put pre-1992 and post-1992 penny coins side by side, the difference is easily visible to the naked eye.

Steel, unlike copper, is magnetic. This has given rise to some party tricks involving magnetized "copper" coins. In primary school science, children often test everyday objects for magnetism and so we should not be too surprised that they conclude that copper is magnetic. From a chemist's point of view one of the most interesting questions is how the copper is electroplated, such that it can adhere so firmly? Has anyone ever encountered a "copper" coin with the underlying steel surface exposed?

British "silver" coins are in fact cupronickel as pure silver is also too soft. Historically, sterling silver (92.5% Ag, 7.5% other metals, usually copper) was used. However, the rising price of silver resulted in a reduction of the silver content to 50% in 1920. The remainder was 40% Cu, 10% Ni, but changed in 1922 to 50% Cu, and changed again in 1927 to 40% Cu, 5% Ni and 5% Zn, emphasizing the difficulties of getting the physical properties exactly right. Allegedly, there were also traces of manganese which caused the coins to tarnish to a very dark colour once they were in circulation. Silver was finally eliminated in 1947, because of a need for silver to repay war loans to the USA, being replaced by cupronickel (75% Cu, 25% Ni). This is still used for most coins except the current 20p coin, which comprises 84% Cu and 16% Ni. A very recent decision by the government will replace 5p and 10p cupronickel coins by nickel-plated mild steel ones (6% Ni), so they too will become magnetic. The mass of a 10p coin will remain unchanged at 6.5 g but the thickness will need to increase slightly, as the density of cupronickel is about the same as copper.

Nickel is thus common in British (and foreign) coins. However about 12-15% of women and 1-2% men suffer from nickel allergy. There is a European Directive which prohibits the sale of articles intended to be worn in close and prolonged contact with the skin if they fail a nickel leaching test (involving the use of artificial sweat). It is likely that most coins would fail the test but there is very little evidence of a problem, even amongst those who handle large amounts of coins. When the Euro was being planned for introduction in 2002 there were vehement protests, especially from Sweden, about the use of nickel. In the event it was only used in the bimetallic 1€ and 2€ coins.

While the sovereign was 22 carat gold (91.67% Au), the UK £1 coin - unconvincing as a real gold coin - is in fact nickel brass (70% Cu, 5.5% Ni and 24.5% Zn). The coin has been extensively counterfeited, sometimes using brass, but counterfeiters also use alloys with melting points between 200 and 350°C based on metals such as lead, tin, antimony or bismuth. These alloys are usually grey or silvery and require to be coated to imitate the pale yellow coin.