Roses are red and so is blood 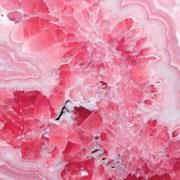 In a previous Chemlingo I looked at some words for red with chemical connections and here we look at some more. The names of two elements are related to red. Rubidium was named by Robert Bunsen and Wilhelm Kirchoff in 1861 from the colour of the distinctive lines in its atomic spectrum and takes its name from the Latin rubidus, meaning deep red.

"Therefore we propose for this alkali metal, in respect to those two remarkable dark red lines, the name Rubidium with the symbol Rb from Rubidus which was used by the ancients to designate the deepest red."

The other element named for its red colour is rhodium, discovered by William Wollaston in 1803, and named for the rose-red colour of its salts and is derived from the Greek rhodon - rose. Rhodochrosite is a rose-red mineral, composed of manganese(ii) carbonate, MnCO3. It is sometimes called Inca Rose as the Incas thought it came from the blood of their ancestors. Rosy, roseate and rose all come from the idea that 'roses are red', although this is not universally true, as roses are now found in many hues.

Rubicund comes from another Latin ruber for red and means red-faced (not fat!), with the same meaning as ruddy, which comes from Anglo-Saxon rudu meaning red. Ruddy is also used as a polite euphemism for bloody, which is also used to mean blood-coloured.

Haematite, the mineral name for iron(iii) oxide, comes from the Latin haematites, meaning a bloodlike stone, and so the prefix haem- gives us all our blood-related words like haemoglobin.
The Greek for red is erythros from which we get erythrocyte, a red blood cell and erythrosine is a red pigment produced by oxidation of tyrosin.

The Latin word fucus meant a red dye obtained from lichens and it was used as a cosmetic and face paint. So fucus became face paint in the 17th century, and to infucate was to paint one's face, but is now used as generic term for seaweed. Red seaweeds are known as rhodaphyta.

Magenta is a coal-based synthetic dye first made in 1859 and commemorates the name of the battle of Magenta in Italy, which was fought in that year. Maroon is a dark, reddish-brown colour which comes from the French for chestnut (marron) and means chestnut-coloured.

Red lead is trilead tetroxide, Pb3O4, and its Latin name is minium. It has been used since Roman times as a red pigment, and until quite recently, as a component of corrosion-resistant paint. The pigment was used to paint small pictures which were then known as miniatures from the Latin miniare, to paint red.