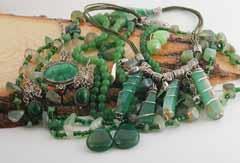 Reading a novel recently I was struck by how many words for green were used. Green is a word that came into Old English (grene) via German from Norse. Several 'green' words have chemical, if not environmental, connections. How many synonyms or words for green can you think of?

Malachite, a blue-green pigment, is a copper mineral - basic copper(II) carbonate, CuCO3.Cu(OH)2. The name comes from the Greek malache for mallow via molochitis, meaning mallow-green stone. When copper sheeting is exposed to the atmosphere it turns green as it becomes coated with the same copper(II) carbonate, by atmospheric oxidation, but it is then known as verdigris. This is a lovely word and comes from Old French verd de Grece, which means 'green of Greece'. Verdigris is also the name given to basic copper(II) ethanoate, formed when copper reacts with ethanoic acid. The French word vert is derived from the Latin for green, viridis. Viridian, hydrated chromium(III) oxide, is a green pigment, and viridescent means greenish or becoming green. A related word is virescence which means turning green, from the Latin virere, meaning to be green.

Glaucous means sea-green from the Greek glaukos for blue-green. Glauconite comes from the same root and is the name for a green mineral which colours marine sands. The green colour is caused by the iron(II) in hydrated potassium iron aluminium silicate.

Green elements of the Periodic Table

At least three elements are named for their green colour. Chlorine, a green gas, derives its name from the Greek chloros meaning pale green. Chlor- then becomes a prefix for chlorine containing compounds, such as chloroform, which are not green in any sense of the word. However, chlorophyll is named for its colour, and here chloro- means green not chlorine-containing. You can't always tell from the name whether the prefix refers to the colour or the presence of the element.

The second element named for its green colour is thallium at the bottom of Group 13. William Crookes named the element after he observed the bright green line in its emission spectrum. Thallos is the Greek for a green shoot.

The third element is beryllium, which gets its name from the pale green precious stone beryl named after the Greek beryllos. Emerald and aquamarine are both green gemstones, variants of beryl, and also give their names to colours.

When people use the word green today they often refer to the environment, and people can be light green or dark green depending on the strength of their environmental convictions. Chemistry designed to be environmentally-friendly is now described as green chemistry.