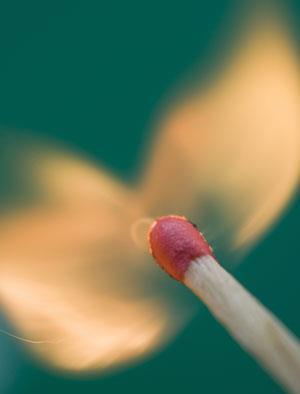 Walking around any town you will encounter groups of people furtively gathered around the doorways of offices, pubs and shops. However, this trail is not about nicotine, but about how smokers light their tobacco.

These days most smokers use a cigarette lighter, for which the fuel is liquefied butane. The butane is ignited by a spark which can be produced by the piezoelectric effect or by rubbing a 'flint' against a rough surface.

The piezoelectric effect depends on the change in dipole density when a crystal is subject to mechanical stress and is exhibited only by crystals that have no centre of symmetry. Quartz and Rochelle salt are well known examples but lighters probably use synthetic ceramics such as lead zirconate titanate. When the crystal is deformed the charge distribution alters, giving rise to a potential difference which is often thousands of volts. Although the current is tiny, the spark has sufficient energy to ignite the gas.

Lighters based on a flint are cheaper and so more common, although the 'flint' is not, in fact, geological flint (silicon dioxide) but an alloy, ferrocerium. Tiny specks of the 'flint' break off when it is rubbed by a rough (steel) surface and the friction ensures the flakes are hot enough to ignite. A complicated mixture is used to obtain both the required brittleness and ignition temperature of the flint, typically Fe (19%), Ce (38%), La (22%), Nd (4%), Pr (4%) and Mg (4%). This is not so different from the original tinder boxes in which a piece of steel was struck against a hard stone and the resulting spark of burning iron ignited a combustible material, eg dry straw.

Some smokers still use matches: in the UK these may be either safety matches with blackish-purple heads, or the red-coloured strike-anywhere variety. The active ingredients in the head of the latter comprise tetraphosphorus trisulfide, P4S3 and potassium chlorate(V), KClO3.

There is also an inert filler, such as zinc oxide or plaster of Paris, a red-coloured pigment such as iron oxide, an abrasive such as powdered glass and a glue to hold it all together.

Earlier strike-anywhere matches had used white phosphorus but this was very dangerous, not only because of the likelihood of the phosphorus igniting if it came into contact with air, but also because of its considerable toxicity.

Safety matches use red phosphorus, which, unlike the white allotrope, is non-toxic. It also does not ignite spontaneously in air and accidental ignition is prevented by separating the oxidising and reducing agents. The red phosphorus and abrasive goes on the side of the matchbox and the potassium chlorate (plus filler and glue and pigment) goes on the match head.

Before phosphorus or its compounds were used in matches it was difficult to achieve self-ignition. In the early 19th century there were a number of devices which relied on the reaction between potassium chlorate and concentrated sulfuric acid, which produces (usually) small explosions as the chlorine dioxide decomposes.

The need to carry around small vials of concentrated sulfuric acid would surely act as deterrent to the most addicted smoker even if the dangerous reaction itself did not do so.

An alternative had a container of hydrogen ignited catalytically by passing over a platinum-coated sponge. Again, not a very safe strategy for portable fire!