Under water: can you survive by breathing in air from a car tyre? 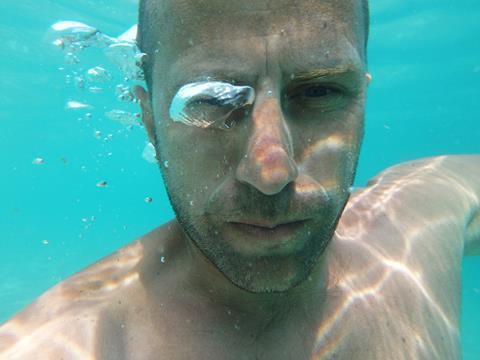 In A View to Kill, James Bond (Roger Moore) is knocked-out and pushed into a Silver Cloud Rolls-Royce. Hoping to drown Bond, the villains push the car into a lake. As the water pours into the car, he gains consciousness but instead of swimming up to the surface, where he will be seen, he stays under the water. He opens a car-tyre valve and breathes the air bubbles saving his life. Is this really possible?

To get a rough idea of the volume of a lung-full of air, we can blow into a balloon. We find it fills roughly halfway and that an inflated car tyre contains the equivalent of roughly 30 half-balloons or breathes. But is this the same under water?

If we go down deep enough the pressure caused by the water will eventually be about the same as that in the car tyre (ignoring how the tyre itself collapses under the water pressure). If we now open the valve no air will come out. If we assume that the car goes down just a few metres then the pressure won't be as great as this but less air will come out of the tyre than it would if it was on the surface. Let's say that we now have the equivalent of 20 or so lung-fulls of air.

The air that comes out will be compressed by the water pressure but our lungs still require the same volume of air to breathe comfortably. The 20 lung-fulls will probably reduce down still further to about 15 lung-fulls (almost half the available air we would have had opening up the valve on the surface).

In the film we see that much of the air is bubbling away. If we say that half gets lost then that leaves Bond with about seven lung-fulls of air. If one lung-full allows him to stay under water for ca 30 seconds then we have a total of ca three minutes of air. He also has another three tyres on the car so, theoretically, he could be down there for 10 minutes or so. However, not all air is breathable. Car tyres contain iron reinforcement strips which will oxidise over time, so there may be less oxygen in the car tyre than expected.

In the Hollywood Science TV series we did this experiment. We found we could breathe in air bubbles under water which displaced any water which also came in. When our heads were down each gulp of air pushed any water to the front of our mouths and we could swallow it. We found that we could stay under quite comfortably for as long as there was air - amazing!

This article was originalyl published in the The Mole