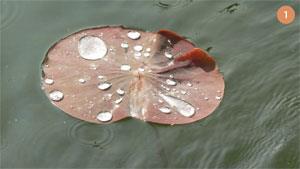 Puddles in the road on a rainy day, ponds and lakes in the park, streams, rivers and even the sea - water is everywhere. But it is so ubiquitous that we often fail to notice its very varied chemistry.

The lily leaf (fig 1), has had its surface splashed by rainwater or a nearby fountain. The drops of water are almost spherical in shape, except one running down a gentle slope. There is no attraction between the waxy surface of the leaf and the water. The surface tension of the water acts almost like a skin pulling the drop so as to minimise its surface area.

This force results from the hydrogen bonds which join the water molecules together. They are not very strong but they are certainly stronger than the van der Waals' forces which attract most other molecules to each other.

In the bulk of the water, the hydrogen bonds pull in all directions so a molecule is not pulled in any particular direction. At the surface, however, the hydrogen bonds only pull the water molecules sideways and into the body of the water, so there is a net attractive force pulling the molecules down into the water. And what a beautiful effect these tiny forces produce. But look more closely - the drops of water are acting as a lens, magnifying the leaf structure underneath. 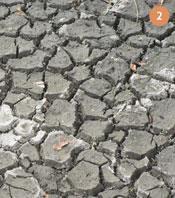 The absence of water has an effect too. This picture (fig 2) was taken in England in the dry summer of 2006, but it could have been taken at many times in many places. The river dried up and the clay dried out and cracked. Laying a ruler across the photograph allows you to make a crude estimate that in any one direction the clay has contracted by about 10%. Clays vary but whilst some can absorb up to 30 times their own volume of water, others absorb 300 times.

Clays generally consist of silicate minerals in which SiO4 tetrahedra are joined together by sharing oxygen atoms, forming long chains or sheets, depending on how many corners of each tetrahedron are shared. Various cations may be present within or between the layers. Several clay minerals are usually present, for example, just under 50% of London clay comprises smectites such as (½Ca,Na)(Al,Mg,Fe)4(Si,Al)8O20(OH)4.n H2O.

Water molecules can be absorbed between the silicate layers, causing them to expand, sometimes to several times their own volume.

On the other hand illites, KyAl4(Si8-y,Aly)O20(OH)4, comprise up to 40% of London clay and these do not absorb water because potassium, calcium or magnesium ions between the silicate layers prevent the ingress of water molecules. The dehydration and shrinking of clay can cause damage to buildings as their foundations shift, for example if tree roots remove water. It's easy to investigate this shrinking in the laboratory by rolling some clay into a sheet and cutting it into strips. On air-drying the length might decrease by about 5% but the mass will probably decrease by over 20%. 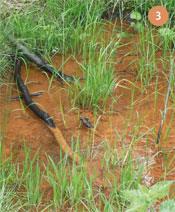 Probably the most memorable property of water is its solvent effect and you can often spot evidence of that on a chemistry walk. In areas where there are old mine workings, (this photograph (fig 3) was taken in the Forest of Dean) as an abandoned mine gradually fills up with water, iron pyrites (fool's gold) is oxidized and hydrolysed.1

Iron pyrites is best thought of as iron(II) disulfide, Fe2+(S-S)2- and the end products are deposits of hydrated iron(III) hydroxide, Fe(OH)3.n H2O (red) or iron(III) oxyhydroxide, FeO(OH) (orange). Some bacteria use this oxidation as a source of energy. 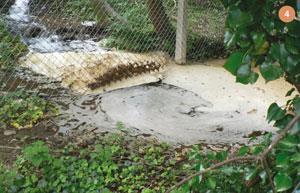 Reactions 3 and 4 consume far more hydroxide ions than are generated by reactions 1 and 2 hence the water from the mine becomes markedly acidic as a result of reaction 5 and is a serious source of pollution. Calcium carbonate is sometimes used in an attempt to neutralise it but the amount of pyrites can be very large.

The cause of this unsightly froth (fig 4) is presumably a surfactant which has dissolved in the water and stabilized the foam, ie the gas in liquid colloid, but that is another (chemical) story.2