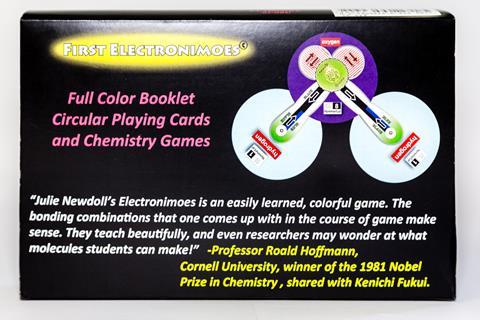 When I unpackaged this game, I was struck by the detailed design of the circular playing cards. Each has an accurate number of protons in the nucleus and electron arrows in both shells and oribitals. The inner shell electrons play no part in the game – in the same way they play no role in bonding chemistry.

Many different games can be played with Electronimoes. The simplest are matching games in the style of Uno, where players lay matching cards that can either bond to the card on the stack or have the same proton number, since there are different versions of each atom that show the electrons set up to form relevant ionic, covalent and metallic bonds.

I asked my year eight science club students to play, and despite not yet studying chemical bonding they were quick to notice the limitation of the game compared to ‘real chemistry’. The atomic cards cannot switch from, for example, ionic to covalent bonding. But this is probably their only limitation as a chemical bonding educational tool.

My students played the uber-competitive (and quite complex) ‘molecule emporium’ version of the game. Through a series of rounds players make molecules to gain money, trade with each other, perform chemical reactions and buy back the molecules in order to strengthen their hand to make more. They grasped the rules quickly and within a few rounds were discussing ways of bonding atoms together and identifying molecules they had never covered in class.

The speed students grasped the game impressed me, as well as its value as an educational tool.

I would definitely recommend this to chemistry teachers. Students seem to be engaged by the game and rapidly learn things they have not yet been taught. At $40 a set, the cards may be beyond the reach of many schools. But it might be worth investing in one set for small group teaching.