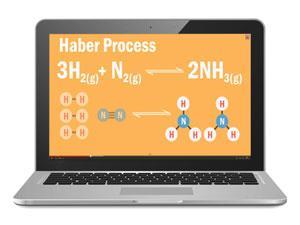 FuseSchool, a global education initiative, has released a series of 68 short animations explaining concepts in chemistry. It calls them The Chemistry Journey and the idea is to provide a free and rather comprehensive educational resource for teachers and learners around the world. But the videos make nice, compact revision aids for any student.

What’s featured? Almost everything on your GCSE chemistry syllabus, from the basics, including how ions form, to applied ideas, such as quarrying and making soap.

The collection was compiled by experienced teachers working with animators, so you’ll find nuggets of wisdom tucked away in the clips. For example, students are advised to remember that cations are positively charged ions using the phrase ‘a cat has paws’ (with the ‘cat’ and the ‘p’ for paws signifying the relationship).

Yet teachers from the UK should watch out for the terminology used in some of the videos. For example, the piece on Le Chatelier’s principle talks about reaction equilibria becoming ‘stressed’ (without a clear explanation of what this term means) before they are shifted to one or other side. This unfamiliar language could conceivably confuse students who haven’t come across it before.

It’s noticeable that the huge array of videos has been produced by different teams in different regions. Perhaps it is this that has led to the subtle differences in language. The videos I watched that were voiced by an English presenter lacked these confusing elements, so it is a pity that FuseSchool hasn’t obviously attempted to organise the videos by regional relevance.

In fact, if teachers are to make use of this interesting resource, it will be worth them checking the quality of each video  before they think of incorporating them into their lessons.

One showed a bizarre marking (that looked like a dot denoting a radical) on what was supposed to be an ion. But others, such as the offering on alkanes and alkenes, were supremely clear and made an excellent effort to keep students engaged, asking them to pause and work out general rules based on presented examples.