Australian researchers have created a prototype electrolyser capable of harvesting water from the air and then splitting it to produce hydrogen gas for use as a green fuel. This device is powered by a solar panel and can operate effectively in extremely dry climates.

The fuel of the future

‘This is the first electrolyser that can produce high-purity hydrogen directly from air,’ explains Gang Li, a chemical engineer at the University of Melbourne, Australia, who worked on the device.

Hydrogen is widely hailed as a cleaner alternative to CO2-emitting fossil fuels. The idea of producing hydrogen by splitting water has been around for some time, with many groups currently focused on the most effective way to achieve this at scale. Typically, these devices depend on a supply of freshwater, but there has been growing interest in developing versions that can collect the water they need directly from the air. Electrolysers of this type could be used in arid climates to avoid green fuel manufacture competing with the supply of drinking water.

Gang and his colleagues’ prototype consists of five electrolysers stacked one above the other, with a solar panel at the top. Inside each electrolyser, there is a highly-porous glass foam soaked in sulfuric acid. The sulfuric acid performs two different roles in the device. Firstly, since it is highly hygroscopic, it can act like a sponge and absorb water from the atmosphere. Secondly, it acts as the electrolyte for the electrolysis process. 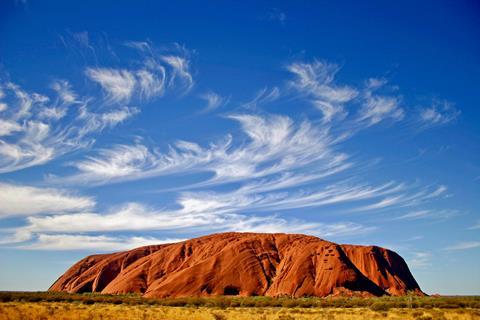 Electricity from the solar panel splits the water that has been collected into protons and hydroxide ions. The protons then move to the cathode, gain electrons and form hydrogen gas, while the hydroxide ions move to the anode, lose electrons and form oxygen gas. The oxygen is vented into the air and the hydrogen gas is collected and stored in a small tank.

‘The novelty in this study is the clever design of the separator between the cathode and anode that functions both as a moisture absorber that supplies water directly from air. As the electrolyte that transports ions between the two electrodes to close the electrical circuit between them,’ comments Avner Rothschild, an expert in water splitting technology at Technion, Israel, who was not involved in this work.

The team demonstrated that their prototype operated effectively for 12 consecutive days, while in and around their Melbourne lab. They also showed that it worked well in a bone-dry environment (generated artificially in the lab) with a relative humidity of just 4%. For comparison, the average humidity in the central Australian desert that surrounds Ayers Rock is around 21%.

The researchers are currently working on how to scale up their technology to produce commercially viable volumes of hydrogen.

This article is is adapted from Anthony King’s in Chemistry World.

Download this article and a one-slide summary with questions to use with your 14–16 students when teaching electrolysis: rsc.li/3M9s2ps