High pressure forces heavy hydrogen to act like a metal

A French team that first made headlines when it claimed to have made metallic hydrogen has now found promising evidence that the isotope deuterium can also be forced into a metallic state but at even higher pressure.

Metallic hydrogen and deuterium hold great promise for new superconductors. They could also be used for powerful rocket fuel, which would be ‘game changing’, according to Nasa.

Piling on the pressure

In theory, all elements become metallic at sufficiently high pressures to squeeze the atoms close enough together that electrons become delocalised, like those in a metal. First predicted in the 1930s, metallic hydrogen is thought to exist at high temperature and pressure inside the giant planets Jupiter and Saturn, giving them their magnetic fields. Producing metallic hydrogen in the laboratory could therefore also help astrophysicists to understand how the two planets formed.

In a fiercely competitive field, some recent reports of metallic hydrogen have been met with scepticism. For example, in 2017, US researchers claimed to have isolated metallic hydrogen at pressures of 495 GPa, exceeding 360 GPa at the Earth’s core. Some other groups doubted whether such high pressures had actually been achieved.

In 2020, French scientists from the Alternative and Atomic Energies Agency (CEA) reported crushing hydrogen in a diamond anvil at a pressure of 425 GPa to give a metallic form. This was based on a sharp change in absorption of infrared (IR) light, consistent with a shift to a conductive metal.

With a mass number of two, deuterium is also known as heavy hydrogen. Because deuterium nuclei are heavier than hydrogen, the researchers reasoned that they would need to apply more pressure to achieve a metallic state. 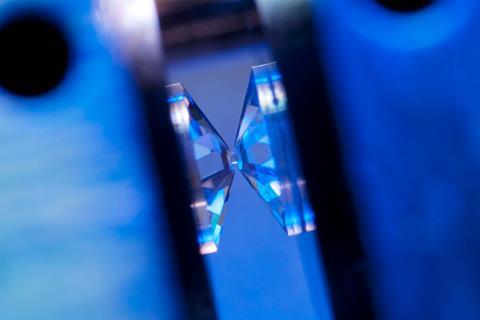 The CEA researchers re-ran the 2020 anvil experiments using deuterium. At the first two attempts they couldn’t reach a pressure above 400 GPa but managed a third time. They found the same switch to complete IR absorption as for hydrogen but at a higher pressure of 460 GPa, showing a ‘probable transition’ to a metallic state.

High pressure physicist Alexander Goncharov at the Carnegie Institute in Washington DC says that the transition to metallic deuterium is a ‘simple phenomenon’ but it is important to confirm it because ‘there could have been more complex physics than we imagined’. He hopes that the researchers will now push to still higher pressures in a bid to improve electronic conductivity.

David Ceperley, a condensed matter theorist at the University of Illinois in the US, suggests the work could find other research applications such as in studies of hydride superconductivity. ‘In general it’s very useful to go from mass one to mass two,’ he says.

This article is is adapted from Tim Wogan’s in Chemistry World.

Download this article and a one-slide summary with questions to use with your 14–16 students when teaching isotopes, metallic bonding and covalent bonding: rsc.li/3pZFGkU