A starter slide to use with 14–16-year-old students to provide context for the study of ways of producing potable water.

A starter slide to use with 14–16-year-old students to provide context for the study of ways of producing potable water: rsc.li/2Hr4q2c 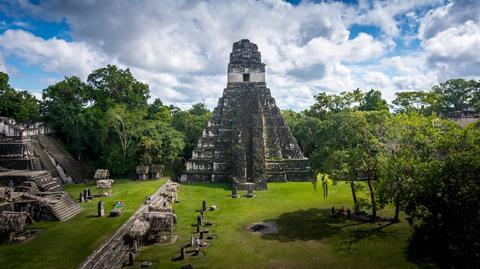 Tikal was one of the biggest Maya cities. Catastrophic cyclones, volcanic events and droughts were common in this crowded city. Consequently, water supplies were easily contaminated by harmful microbes and toxic mineral leachates.

The city’s inhabitants collected zeolites and quartz from a source near the city, where these minerals were deposited in volcanic rock. Zeolites are porous and non-toxic aluminosilicates with potent absorbing properties that can filter out microbes and toxins from drinking water.

A team of US researchers used X-ray diffraction and accelerated mass spectrometry to determine the nature of the minerals in Tikal’s former reservoirs. Carbon dating them revealed that, since 235 BC, people filtered water in one of the main city’s reservoirs through a mixture of zeolites and crystalline quartz. Quartz was efficient enough at clearing the water, but the zeolites were crucial to remove toxins.

Use the starter slide with your class to give them a new context for their study of ways of making potable water.