Are we all made of Mars?

Did life come from Mars?

Chemistry was recently in the news with an announcement that scientific discoveries point to life beginning on Mars, but why? The answer is all to do with the chemistry of ribonucleic acid, or RNA, which is thought to have come before DNA in our chemical evolution.

At a recent geochemical conference, Steven Benner (a biochemist and founder of the Foundation for Applied Molecular Evolution in the US) compared the mineral composition of early Earth with our neighbour Mars to argue that RNA could only have been made on Mars. His argument is that the organic molecules that are joined up together to make ribose and then RNA need several different minerals to help in their chemical journey – boron to stabilise the starting materials and molybdenum to catalyse them into more complicated structures, including ribose.

However, billions of years ago, when life is thought to have begun, the Earth did not have much oxygen in its atmosphere and the planet was very, very wet. All that water, says Steven, would keep the soluble boron too dispersed to stabilise the organics, and molybdenum wouldn’t have existed in the right oxidation state to catalyse the required reactions. Instead, Steven argues that the Martian climate at the time would create ideal conditions to form carbohydrates, including the vitally important RNA. 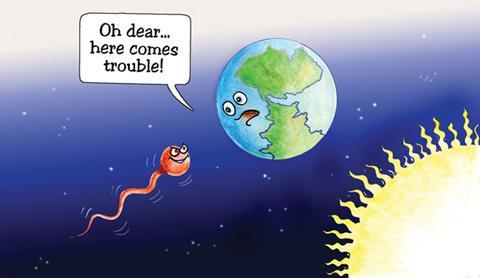 Ultimately, we don’t know the exact chemistry that led to us being here, and I suspect there were more dead ends and false starts that we can even imagine. But, despite the odds, we’re here. For those who are trying to work out plausible pathways, the reaction conditions have to mirror what was possible at the time. For example, today we can make proteins through solid state synthesis but that’s certainly not how it would first have happened.

But while we can’t yet make life from scratch, there are a lot of people working on it, some of whom have been able to make RNA’s building blocks without boron and molybdenum compounds. If it turns out that life can only be made using borates and molybdenates, then Steven may well be right and life on Earth might have been seeded from a planet like Mars where those minerals would have been more common. But other plausible mechanisms might also be shown to work.

Whatever the result, geochemistry is key to suggesting plausible reaction conditions for the origin of life, whether here or elsewhere. Somewhere life did evolve from chemistry and perhaps one day we’ll be able to pinpoint where as well as how. But I’m not changing my planetary status just yet. All life on Earth might have Martian origins, maybe we come from an unknown environment and maybe we’re from the good old third rock from the sun. Whether we get one or not, Mars is not yet the definitive answer.