As a chemist and a journalist, I can frequently be found on my soapbox when chemicals are unfairly portrayed as ‘bad’ by the media.  But there are a handful of chemicals out there that are bad. Appallingly, irredeemably, bad. The world received a shocking reminder of that last year when chemical weapons were used to gas civilians in Syria.

After five apparent practice runs earlier in the year, on 21 August 2013 an estimated 1500 Syrian’s were killed by exposure to the nerve gas sarin in the suburbs of Damascus. Backlash from the international community over this attack led to Syria finally agreeing to sign the Chemical Weapons Convention. Implemented by the Organisation for the Prohibition of Chemical Weapons, this convention prohibits the use, production and stockpiling of chemical weapons in all its signature countries. Syria has agreed to the destruction of its entire chemical weapons programme by 30 June 2014. This is phenomenally fast, when you consider that the US is not estimated to complete destroying its own stockpile until 2023.

Countries are normally expected to destroy these chemicals on their own soil, but it was quickly decided that this wasn’t feasible in war-torn Syria. Instead they are being transported overland from multiple storage sites to a Syrian port, and loaded onto Danish and Norwegian cargo ships. The less nasty stuff is destined for incineration at commercial facilities in the UK, US and Finland. Meanwhile 700 tonnes of sulfur mustard, a sarin precursor and a VX precursor are being taken to an Italian port and loaded onto the US Navy’s container ship MV Cape Ray. Once all the chemicals are onboard the ship will sail out into international waters and the chemicals will be destroyed. 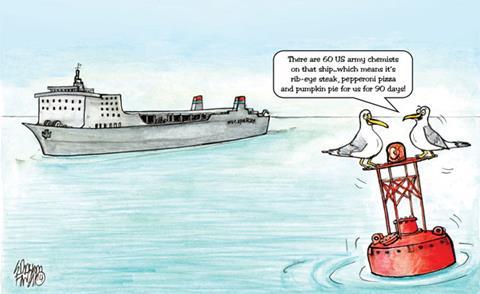 To do this the MV Cape Ray has been kitted out with two field deployable chemical hydrolysis systems. The chemistry behind the neutralisation is remarkably simple, as all the chemicals break down when exposed to hot water, bleach or sodium hydroxide. Mustard gas for example breaks down in hot water to hydrochloric acid and thiodiglycol. Over 60 US Army chemists will be working 24 hours a day for an estimated 90 days to neutralise the chemicals. More than 92% of the declared chemicals have now left the country or been destroyed inside Syria, and the UN has requested that the Syrian authorities conclude the removal operations promptly to ensure the June deadline is met.

The chemist in me recoils at the thought of being associated with the ‘chemists’ who have been preparing these materials in Syria since the 1970s. But those – undoubtedly nervous – US chemists now ready and waiting for the biggest challenge of their lives on the MV Cape Ray? Those men and women I am proud to call chemists, and I wish them all the very best of luck.