Falcon 9 explosion: going up but not taking off 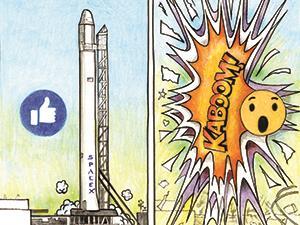 Thursday 1 September was a frustrating day for Elon Musk’s SpaceX company. After a successful first half of the year, a significant hiccup occurred. During a static test fire – a dress rehearsal – their rocket Falcon 9 exploded, before it had even turned on the engines.

While nobody was physically injured, the ‘anomaly’ has caused significant damage. Both the Falcon 9 rocket and its cargo, the AMOS-6 satellite worth $200 million, were destroyed. The satellite was meant to help Facebook bring internet and phone services to sub-Saharan Africa. Spacecom, the manufacturer of AMOS-6, has said it has begun measures to ‘regain funds’, and Facebook’s Mark Zuckerberg said he is ‘deeply disappointed’.

At the time of writing, the cause of the explosion is still unknown and we can only speculate about whether it was caused by the vehicle itself or equipment on the ground. In a press release on 2 September, SpaceX explained that the investigation includes reviewing ‘approximately 3000 channels of telemetry and video data covering a time period of just 35–55 milliseconds’. It will likely take a while.

What we do know is the explosion occurred while the rocket was being fuelled and appears to have originated in the upper stage liquid oxygen tank. The rocket propellant used in the Falcon vehicles is a combination of fuel kerosene (RP-1) and oxidiser liquid oxygen (LOX). It is easy to wonder whether it might have played a role.

However, the RP-1/LOX combination is not an unconventional choice. RP-1 was originally developed as a way to combine the heat resistance of alcohol fuel and the specific impulse – the efficiency of the launch thrust – of gasoline, achieved by selecting polycyclic hydrocarbons over linear alkanes. It holds up well against the common alternatives: liquid hydrogen (LH2) with LOX, and self-igniting hypergolics, usually hydrazines with nitrogen tetroxide. Though RP-1 has a lower specific impulse than LH2 it is cheaper and denser, which requires smaller storage tanks, and it’s much less toxic than hydrazines. Unsurprisingly, it’s an industry favourite.

But although it is a common setup, the Falcon’s is slightly different: to increase density and ‘pack’ more into the tank, the LOX is cooled to 66K – the coldest anyone has gone with LOX. So far the main issue has been getting the rocket fuelled without warming up the LOX, but eight rockets have been successfully launched using this system.

Whether the propellants end up being a crucial piece of the puzzle of the explosion, we don’t know. As Musk tweeted, it is ‘turning out to be the most difficult and complex failure we have ever had in 14 years.’