Strict vegetarians don’t just worry about keeping their diet animal-free but also the products they use in everyday life. There are vegetarian alternatives to fur, leather and certain animal-derived ingredients used in beauty products. Now, though, vegetarians also have to be careful about what they put in their wallets, because the new English £5 notes contain animal fat.

However, the Bank of England is considering alternatives such as palm oil or coconut oil for the new £20 notes, which are due to be introduced in 2020. 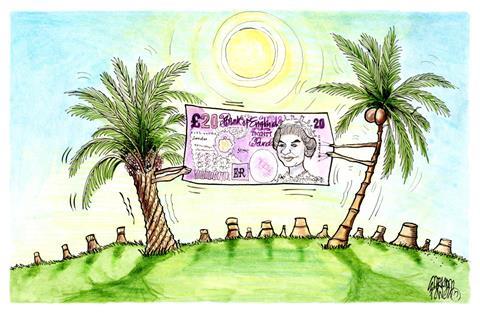 So why would a banknote contain animal fat? It’s down to the processes used to make the polymer notes introduced in September last year. The notes, which are more environmentally friendly due to their long lifespan, are printed on a plastic film made from poly(propylene). As for most plastics, poly(propylene) contains a package of additives used to improve its properties during the manufacturing process. In the case of the fivers, the plastic contains traces of fatty acids derived from tallow – rendered animal fat – the same stuff we used to make candle wax in the middle ages. Today, fatty acid salts (or metal soaps) are used as antistatic agents or antacids in the production of polyolefins like poly(propylene). These essentially prevent the polymer from becoming unstable and degrading during processing.

The Bank of England wasn’t initially aware its notes were being produced using tallow-based additives. Once the issue was highlighted, it began looking for animal-free alternatives. This turned out to be trickier than expected, as the two key fatty acids in tallow – palmitic and stearic acid – are present in much lower quantities in plant oils. The fatty acid composition of beef tallow is 25% palmitic acid and 27% stearic acid, whereas for coconut and sunflower oil, for example, both figures are less than 10%. One exception is palm oil, which contains 43% palmitic acid and 4% stearic acid. However, palm oil comes with its own problem: destruction of the rainforest.

According to Efeca, the organisation commissioned to assess alternatives to tallow, palm oil is ‘the most commercially viable plant-based alternative’ due to its well-developed supply chain. Efeca’s report emphasises that the volumes required for banknote production are so small they would not lead to further deforestation. Nevertheless, it recommends the Bank commits to sustainable sourcing of palm oil due to its status and influence.

Unofficial estimates suggest less than one cow’s worth of tallow is all that’s needed for the entire stock of £5 notes. So is it really worth all the fuss? For the meat-free among us, it may be more a matter of principle, but it also raises the question of what other plastic products could be considered unsuitable for vegetarians.