… electrical engineer, salsa dancer and comedian – Jamie Gallagher meets Edwin Silvester to explain how it all fits together 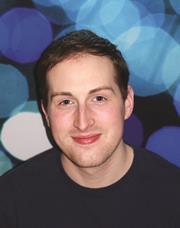 Jamie Gallagher is currently polishing off his PhD thesis at the University of Glasgow. Yet he was recently named in the UK Science Council’s 100 leading scientists, chosen alongside such media luminaries as Alice Roberts and Maggie Aderin-Pocock for science communication. In Jamie’s own words, ‘it highlights the importance of public engagement in science and that all scientists must be able to communicate their work and its importance to truly make an impact.’

Jamie is certainly having an impact. Before even submitting his thesis he’s already been signed up to a new role as public engagement officer for the University of Glasgow, coordinating, developing and measuring the impact of the university’s public engagement. Jamie says he hopes ‘to inspire students with the success I have had in taking my research out of the lab and making it interesting and accessible to all.

‘It is great to see the help, support and reconnection that organisations like the Royal Society of Chemistry offer to those undertaking engagement activities and I look forward to encouraging more of our staff and students in undertaking a host of rewarding activities.’

Jamie’s infectious enthusiasm for learning and communicating are bound to make him a success in the new job and it’s a natural extension of his own energetic public appearances.

Jamie has taught salsa in Glasgow for the last five years, running classes for both beginner and advanced dancers. ‘I find there is actually a strong link between teaching dance and science communication’, he explains. ‘With both, the goals are the same – to take some fairly complicated information and share it in an understandable, accessible and fun way.’

His passion for explaining science to both expert and non-specialist audiences led to Jamie being named one of the RSC’s 175 Faces of Chemistry – and the RSC also sponsored his excellent Periodic Success show at Cheltenham Science festival in 2013.

‘I can get a little bit excited about science’, he says. ‘There are so many wonders to explore I just can’t contain myself so I started telling people about it.

‘I’ve had shows at the British Science Festival and also in Cheltenham, Manchester, Glasgow and Edinburgh. I’ve worked with the BBC and independent production companies; I’ve spoken at schools and universities; set fires in science centres and interpreted energy with dance troupes.

‘Science has taken me from basement bars to the painted hall of the maritime museum via muddy fields and recording studios and what an adventure it has been! I always look forward to my next project.’ 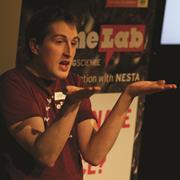 Jamie is outspoken on diversity in science, not least because one of his chemistry inspirations is Marie Curie, who came up against immense sexism in her illustrious career.

‘She is the only person to win two Nobel prizes in different sciences and yet the prejudice and bigotry she encountered and battled through her life is staggering’, he says. ‘She was turned away from universities; she was hounded and vilified by the media and all for being a woman.

‘Today it is all too easy to forget that her scientific quest was a daily fight, or to think that the issues she faced are long since gone, they are not. Let us learn from the mistakes of the past and ensure that no one needs to fight to justify their right to pursue their scientific dream.’

The thrill of discovery

And while Jamie is almost ready to hand in his thesis, this won’t be his last foray into research. He says: ‘There is a thrill to scientific discovery. It gives me a kick to know that when I investigate something I’m the first person in the world to know about it. If you’re working in a field, it’s yours – you feel very connected to your topic and passionate about it.

‘You’re the one person learning about it and then telling others about your discoveries. The scientific community is fantastic and the idea of discovery is extraordinary.’

2012, Winner in the Scottish final, and runner-up in UK final, of the Famelab science communication competition

2011–present, Tour of the UK with self-written science shows

2009–2013, PhD in chemistry and electrical engineering, University of Glasgow